You are here: Home / Competition / Rifle and Pistol Athletes Head to China for Second World Cup of the Season 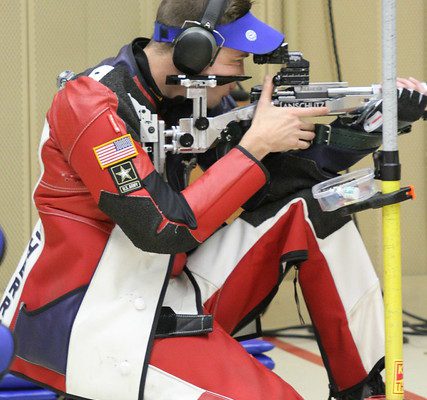 The Rifle and Pistol athletes of the USA Shooting Team are on their way back to Asia for the second International Shooting Sport Federation (ISSF) World Cup of the season in Beijing, China starting Sunday and running through April 29. More than 580 athletes from 67 countries are expected to compete at this World Cup. USA Shooting is sending 23 athletes to compete in this event.

It’s crunch time as the top Rifle/Pistol athletes in the world will not only vie for medals, but for valuable 2020 Olympic Games quotas during this year’s World Cup season. An Olympic quota is essentially a country’s ticket to participate in a specific event in the 2020 Olympic Games. Earning an Olympic quota in competition ensures the country a spot in that particular event, not necessarily the athlete. Athletes will earn Olympic Team slots via a trials system which can be viewed here: https://bit.ly/2FnccFI. Of the 16 individual athlete quotas the United States would need to send a full team in the Rifle and Pistol events to the Olympic Games, U.S. athletes have earned two of a possible eight in Pistol and five of a possible eight in Rifle. The athletes for this World Cup were selected during the Winter Airgun Championships and Spring Selection Match last month.

The first World Cup of the season in New Delhi, India saw lots of close calls on Finals appearances for the USA Shooting Team and those athletes will look to build on those performances in pursuit of medals and quotas in the Chinese capital. Among those to expect comeback performances in China from is Tim Sherry (Highlands Ranch, Colorado/U.S. Army Marksmanship Unit, pictured), who just set a National Record at the Spring Selection Match last month with his Men’s Air Rifle score of 630.9.

Alexis Lagan (Boulder City, Nevada) just missed the Women’s Air Pistol Final by two points after a couple costly shots in India but is expected to do well in the Women’s Air, Sport and Air Mixed Team events.

Women’s Rifle brings a strong contingent to China in Ali Weisz (Belgrade, Montana), Mindy Miles (Weatherford, Texas) and Olympic gold medalist Ginny Thrasher (Fairfax, Virginia), who will be competing in their first international competition of 2019. Miles and Weisz won gold and silver in Women’s Air Rifle at the Championship of the Americas in Guadalajara, Mexico in November. The duo also finished atop the podium at the Spring Selection Match. They’ll be joined in Women’s Air Rifle by Thrasher in her 2016 medal-winning event.

The Pistol side will bring some athletes making their international debuts in the Open events for the United States. Henry Leverett (Bainbridge, Georgia), who finished in fourth in Junior Men’s Rapid Fire Pistol at the World Championship, will make his Open World Cup debut in Rapid Fire Pistol. The 17-year-old recently finished in second place at the Spring Selection Match. Miglena Todorova (Miranda, California) started competing in 1994 for her birthplace of Bulgaria, with whom she won a World Cup silver medal in 2002. She’ll make her debut on the USA Shooting Team in Women’s Air Pistol after winning the Spring Selection Match by one point over National Champion Lagan. She will also compete in the Air Pistol Mixed Team event.

2016 Olympian Jay Shi (Phoenix, Arizona) will compete for the first time in the city of his birth, Beijing. Shi will compete in Men’s Air Pistol. Learn more about Shi in this feature from 2016: https://bit.ly/2GuEHmM.