You are here: Home / Airguns / Rattle This! The New Umarex AirSaber 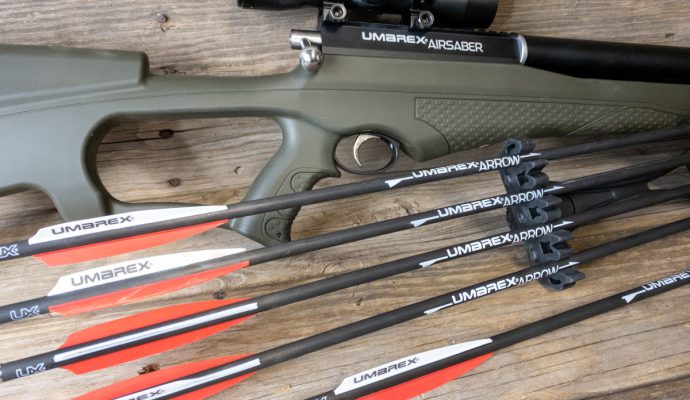 According to Dictionary.com, a saber is a “heavy, one-edged sword, usually slightly curved, used especially by cavalry.” The term can also refer to a soldier armed with such a sword, or to similar fencing apparatus. However, the coolest use of the word saber emerges from its use as a verb. Sure, you can “saber” someone, but it’s much more fun to “saber” a bottle of fine champagne. You might have seen that in an old James Bond movie or two. The Sommelier draws an actual saber, and with a grand flourish, swipes it along the bottle, thereby bashing off the cork in one elegant and supremely handsome motion. I’ve always wanted to try that at home. I’ve also always wanted to remain married, so that particular life experience remains on my bucket list.

But wait, with this new air (gun?), I might be able to one-up those sash-wearing waiters in the movies and open my champagne with the new Umarex AirSaber. It looks like a space-age air rifle with a 250-caliber barrel. On closer inspection, you’ll see that the “barrel“ is actually a shroud that covers a much smaller interior “barrel.” That’s where the magic lies because the AirSaber launches arrows, not pellets or slugs. Unlike previous arrow-flinging devices, the shroud on the AirSaber offers protection to your arrow and the interior launching tube. That makes it “woods proof” if you intend to hunt with it. Only a small portion of the arrow tip is exposed through the “muzzle.”

According to Umarex, the AirSaber is a “single arrow high-pressure air propulsion system.” I think I can help them tighten up that description a bit. It’s where the fun starts.

The AirSaber packs 3,625 pounds per square inch of air power into its below barrel reservoir, allowing up to 25 shots before you have to add more air. That’s efficient considering the AirSaber flings a 350-grain arrow downrange at over 400 feet per second. The Umarex Straight Flight Arrow itself weighs in at 250 grains and the included field tips add 100 grains. While we’re talking about tips, you can pop in broadheads for hunting use. These arrows are pulled, rather than pushed from the rear because the hollow body allows air pressure to reach the front tip of the arrow. That “pull“ approach leads to less flex and better accuracy than if one tried to drive them from the base.

The AirSaber fills with a Foster quick-detach probe at the front of the reservoir and features an onboard pressure gauge recessed into the bottom of the stock. To fire the AirSaber, just slide an arrow over the internal tube located in the middle of the barrel shroud. Do be sure that the AirSaber is uncocked when mounting an arrow. At the end of its travel, you’ll feel and hear a slight “click.” That’s your cue that the arrow is locked in place. You can still pull it off if you need, but the “lock” prevents the arrow from falling out of position. Once loaded, you operate the bolt to cock the Air Saber. There is a cross-bolt-type safety in the trigger itself. A push with your trigger finger prepares the AirSaber to fire when ready.

The AirSaber has an accessory rail on top of the receiver and ships with an Axeon 4×32 Archery scope complete with graduations for precise hits at varying distances.

According to my favorite Umarex guru, the AirSaber launches its quiver of pointy sticks at over 400 feet per second. I believe him, but being that this is an adventure and not just a job, I felt compelled to do my own velocity testing. This turned out to be easy. I’ve still got a loaner pocket chronograph from FX Airguns. Recently I received the new mounting bracket that allows you to hang the pocket chrony from the muzzle, so this was a good opportunity to test that method out. Since the AirSaber has an actual barrel rather than an exposed arrow, this process worked just fine as the chronograph hung from the shroud. I launched a handful of bolts and came up with an average velocity of just under 410 feet per second.

The most interesting thing about the Umarex AirSaber is its rifle-like qualities. I love the shroud over the barrel. That protects the launching tube and arrow itself if you’re using this in the field. The design also just handles like an air rifle and not some bulky monstrosity that happens to launch arrows. Next challenge? I’m going to pop open a bottle of bubbly with the AirSaber. If I succeed, I just might post the video on our social media. Wish me luck.