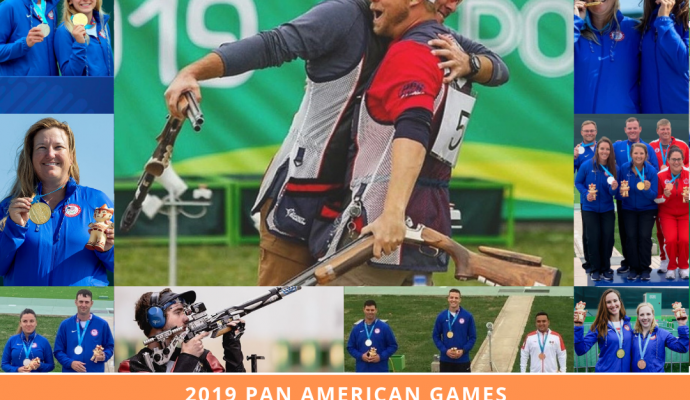 (COLORADO SPRINGS, Colorado – August 3, 2019) –  The 2020 vision USA Shooting is seeking was set in motion with an ultra-successful 2019 Pan American Games as shooting competition concluded Saturday in Lima, Peru. But, not before Team USA earned another three medals and an additional Olympic quota.

The week-long competition provided plenty of podium moments for the Team that has the organizational goal to #RaiseTheFlag ahead of Tokyo 2020.  The U.S. flag was raised 20 times in Lima by members of the U.S. Shooting Team with 10 gold medals, eight silver medals and two bronze medals. The U.S. finished first and second in five events.

Seeking 10 Olympic Quotas, this Team earned seven just missing out on opportunities in Women’s Air Pistol (2) and Men’s Rapid Fire Pistol (1).  Despite that, some big goals were achieved, none more important than the two Olympic quotas earned by gold medalist Brian Burrows (Fallbrook, California) and silver medalist Derek Haldeman (U.S. Army Marksmanship Unit/Sunbury, Ohio) in Men’s Trap. They’re ultimate triumph brought to an end a streak that had seen no U.S. competitor at the Olympic Games in this event since the 2008 Olympic Games.

U.S. Shotgun and Rifle Teams have secured all available Quotas for Tokyo 2020 as the Pan Am Games conclude and just one additional competition to earn those Quotas remains. The U.S. Pistol Team will be seeking to fulfill those Quota opportunities coming at the International Shooting Sport Federation (ISSF) World Cup in Rio de Janeiro, Brazil, August 26-September 3.

Big winner today was Sandra Uptagrafft (Phenix City, Alabama), who many on social media were hailing as the Quota Queen, and rightfully so, after she won gold and earned the Olympic ticket in Women’s Sport Pistol. That’s the third-straight Pan American Games that Uptagrafft has earned a Quota for her country. Uptagrafft qualified fifth and then had to weather two shoot-offs against Ecuador’s Diana Durango to earn the gold. Nathalia Tobar (East Northport, New York) made the Final and finished eighth.

Also, picking up their second medals of the Pan Am Games were the Air Rifle Mixed Team of Lucas Kozeniesky (Fairfax, Virginia) and Mindy Miles (Weatherford, Texas).  After a big day Friday in which he won gold and earned the Quota in Air Rifle, the 2016 Olympian Kozeniesky was back on the line to help shoot for another medal with Miles, who had earned the silver medal in Air Rifle on Thursday behind Ali Weisz (Belgrade, Montana).  The duo would qualify first but then settle for the silver medal to the team from Argentina. Gold medalist Weisz and Tim Sherry (USAMU/Highlands Ranch, Colorado) qualified second and would fall to fourth in the Final.

In Men’s Skeet, U.S. Army Marksmanship Unit (USAMU) soldier-athlete Christian Elliott(Greenville, Indiana) earned the gold medal to complete the gold-medal sweep for Team USA in Shotgun, with gold medals in all five events and seven medals in all.  After shooting 122/125 and the bib-order shoot-off, Elliott would qualify second. He’d go on to defeat Guatemala’s Juan Schaeffer by two targets in the Final. His USAMU teammate Phillip Jungman (Caldwell, Texas) joined Elliott in the Final, qualifying fifth after a score of 122 and the bib-order shoot-off. He’d finish just off the medal stand in fourth.