You are here: Home / Airguns / Play Army in Your Backyard with Sig Sauer’s M17 Air Pistol 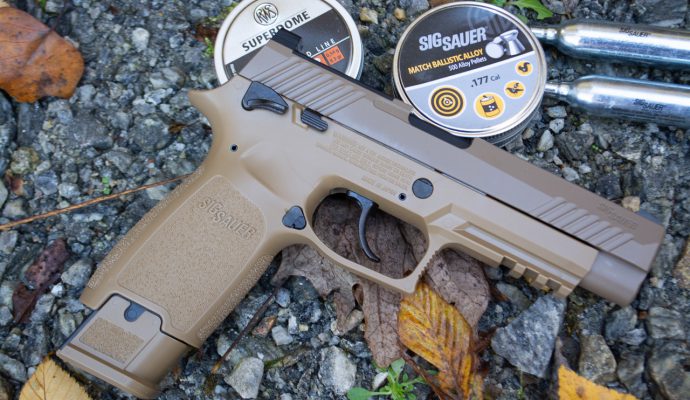 I have a Sig Sauer P320 pistol in the fire, smoke and noise variety. I love it, in part because it’s chambered in a caliber that’s more filling AND creates more noise. That would be .357 Sig. If you’re not familiar, think of a turbo charged 9mm that comes darn close to matching the ballistics of certain .357 Magnum loads. Here’s the problem. When I shoot it in my garage and backyard, it scares the dog and for some reason the local SWAT team shows up in a state of extreme agitation.

Since the launch of that Sig Sauer P320, the Army got a bug up their butt to change pistols and started a big and expensive search for anew one. After lots of testing, committee meetings, and giving a billion or so Powerpoint presentations to each other, they decided on a new variant of the P320 and called it the M17. The basic internals are pretty much the same. The differences are from the Army’s requests for things like different frame types for varying soldier hand sizes and mission needs. It’s also got a bigger magazine and a manual ambidextrous safety. And like the original Sig Sauer P320, this new M17 isn’t exactly backyard friendly, at least not if you live under the iron fist of a neighborhood association.

So, if you ever reminisce about playing “Army” in your backyard, Sig Sauer has good news for you. The Sig Sauer M17 Air Pistol is now available as an ultra-realistic iteration of the military’s new center-fire pistol. However, this one uses CO2 canisters and is chambered in the yard and garage-friendly .177 pellet caliber. As you can tell by the photos, it’s true to form and will share holsters and accessories with its center-fire sibling. Lasers? Yes. Tactical weapon lights? Yes. Bayonet? If you must.

This new and much quieter M17 runs on C02 and features realistic operating features including a reciprocating slide. While it can’t match the recoil of the real thing, it offers a satisfying action that gives you a good taste of gun movement. As such, it’s not only fun to shoot but a great tool for training at home. In fact, besides the dramatically reduced ballistic energy and associated safety benefits, the only difference you’ll notice is a slightly different feel in the trigger. For the air-powered version, each trigger press also has to advance the internal belt magazine so there’s a bit of extra pressure in the take-up stage.

But let’s get back to the features. The Sig Sauer M17 Air Pistol is a .177 pellet repeater. To explain how it works, we need to take a quick diversion on the clever magazine design. First, in a nod to realism, you can drop and install a new magazine without losing more than a single shot’s worth of C02. This is nifty because the magazine houses both the C02 cartridge and a sub-magazine with all the pellets. When you drop the magazine, both come out as a single unit. There’s a separate button in the magazine body itself which releases the pellet reservoir. That sub-magazine contains a belt that holds 20 pellets. To load, just flip open the access door and drop pellets in their respective spaces. You’ll have to rotate the belt by hand to access them all, but that’s easy.

Loading CO2 cylinders into the magazine is also simple. A generously large compression lever seats the cylinder and pierces it in one motion. Be sure to put a small drop of Pellgun Oil or similar on top of the cylinder to keep the seals leakproof. Once the cylinder and sub-magazine are inserted, just smack the whole assembly into place and you’re ready to shoot.

The M17 has ambidextrous safety levers mounted on both sides of the frame just below the rear sight. As you expect, raising them prevents firing. A simple push down with your thumb disengages the safety so you can resume plinking.

By the way, the Sig Sauer M17 Air Pistol field strips like the real deal too. While I haven’t had a malfunction yet, if pellets jammed in the bore or action, just pull the slide back to the takedown position and rotate the takedown lever 90 degrees. That allows you to lift the slide off of the receiver, remove the recoil spring assembly, and access the breech end of the barrel.

It’s a good-looking pistol that feels great in the hand too. But how does it shoot?

I’m still waiting on my Labradar Doppler radar chronograph to replace the one I may or may not have shot to pieces in a momentary loss of concentration, so I could not check the velocities of various pellets. That’s OK, however, as velocity isn’t a significant factor with this pistol anyway. It’s for fun, plinking, and training, so I don’t care whether it shoots a pellet at 350, 400, or the factory-rated maximum of 430 feet per second. I would assume that the 430 velocity applies when using lighter ballistic alloy pellets. One day I’ll use this pistol for a pellet round-up and check them all.

I did accuracy testing at 10 yards to see how the M17 performed on that front. After shooting a variety of pellets, all of which impacted close enough to the point of aim so that no sight adjustment was necessary, the pistol appeared to like Sig Sauer’s Match Ballistic Alloy pellets the best. These no-lead flat-point pellets weigh 5.25 grains but more importantly, have proven accurate in virtually every rifle and pistol I’ve tested. With some informal testing from 10 yards, I consistently shot groups in the one-inch range. There wasn’t a huge difference with other pellets. The lead version of the Sig Sauer Match pellets, weighing 8.18 grains, were nearly as accurate although they impacted about an inch lower on target at the 10-yard distance.

This is a fun pistol. It’s plenty quiet for backyard use and those light .177 pellets don’t exactly require a 10-foot earth berm for a backstop. If you want to get serious about training with one, try adding a Mantis X device. That uses internal sensors to track minute movements before, during, and after the trigger press. If you want to practice indoors, just shoot air only with this configuration and you’ll get a “shot” along with a bit of recoil and slide reciprocation action without perforating the sofa. The Mantis will tell you how you did. The Sig Sauer M17 Air Pistol retails for $119.95.