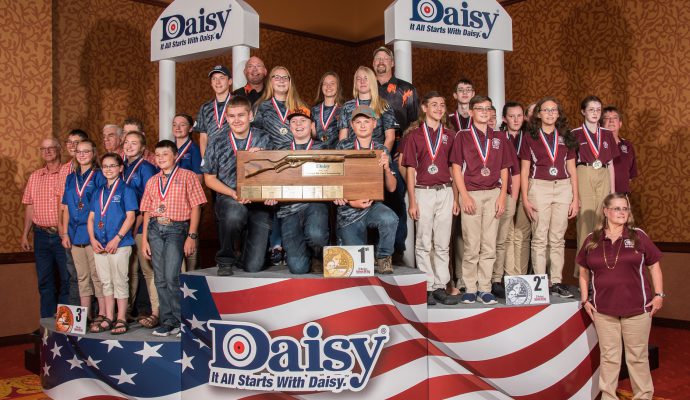 ROGERS, AR (July 2019) – Daisy Outdoor Products – Each year the Daisy National BB Gun Championship Match features teams of youth from across the nation competing in this 5-meter, 4-position National Championship match, and this year the Pierre Junior Shooters from Pierre, S.D., edged the team out of Walton County, Ga., to take home the Gold Medal and traveling trophy. The event wrapped Saturday night, July 6, with a festive medal ceremony that named not only the Team National Championship, but also Championships in Individual, Alternate and Champion Divisions.

Sixty-four teams converged on Rogers, Ark., for the 54th year of the “Daisy Nationals,” from as far away as Oregon, Montana, Georgia and Houston, Texas. Teams consist of five shooters and two alternates ages 8-15, who have completed the Daisy Curriculum and other training provided by organizations such as the 4H Shooting Sports, Royal Rangers, the American Legion and other community and youth based clubs. Teams must also place first, second or third in their state’s NRA-sanctioned contest to get an invite.

Youth competitors shoot 10 shots from each of four positions – Standing, Kneeling, Sitting and Prone – at the target placed at 5 meters, and these kids are good. They shoot Daisy Model 499B Champion BB guns, billed as the most-accurate BB gun in the world. Each year multiple shooters place all 10 shots in the bullseye.

There’s also a safety aspect to this match. On the first day, every competitor takes a 50-question written test that covers gun safety, match rules and shooting knowledge. The results of the test make up 20 percent of each competitor’s final score, and that can be the difference between the Gold and Silver medals.

An award is given to the team that scores highest on the test, and this year for the first time, three teams from South Dakota tied to win this award: the Humboldt Sharpshooters, Marshall County and the Pierre Junior Shooters.

Eric Bird from Wyandotte County, Kan., shot a 488 with 21 bullseyes to win the Individual National Championship, and he had a perfect score on the written test. Right at his heels was Anthony Stacy from Walton County, Ga., who shot a 485 with 21 bullseyes. The tightest race in the Individual Division was between Stacy and bronze medal winner Irene VanDyke of Carvelius, Ore. (Go Timber Beasts!), who also scored 485 but had two less bullseyes.

In the Team Division, winning the Silver Medal was Walton County 4H out of Georgia. Walton County scored 2382 with 87 bullseyes – two more than the Pierre Junior Shooters, who won the event with 2385. The Marshall County 4H Sharp Shooters took the Bronze Medal with a score of 2363 with 70 bullseyes. Rounding out the top five was the Humboldt Sharpshooters from Hartford, S.D., followed by the Permian Basin Young Guns from Midland, Texas.

“Competitive shooting teaches mental focus, patience, coordination and the bigger lessons of practicing to improve a skill. That’s very easy to see in shooting because when you first start, your groups are big, but as you practice those groups shrink and get tighter – it’s the perfect illustration of how you improve through practice. We’ve also seen how this program improves the lives of those with attention disorders or issues. Competitive shooting requires disciplined breathing and muscle memory, and tack-sharp focus. Coaches have repeatedly told us how kids who were struggling with school or discipline issues have improved in those areas after getting into competitive shooting.”