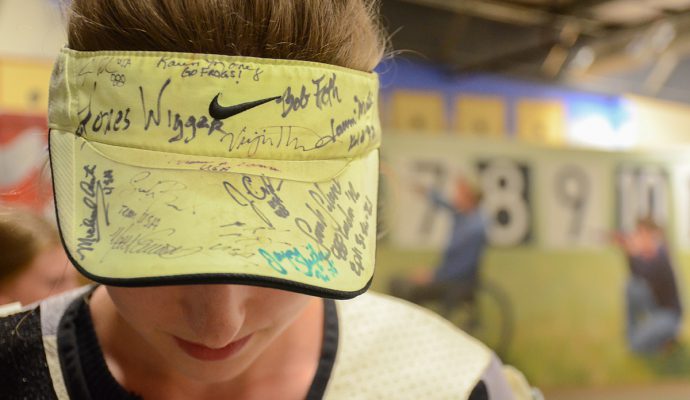 CAMP PERRY, Ohio – Gavin Perkowski, 17, of the Great Trail Musketeers from Ohio, claimed the overall win at the 2019 National Three-Position Air Rifle Championship, marking an overall score of 692.8. The event was conducted by the Civilian Marksmanship Program (CMP) at the Gary Anderson CMP Competition Center July 14-15, with over 280 individual high school athletes.

Following just one-tenth behind Perkowski in second place was Vittoria Watts, 14, of Lincoln Lead Heads in California, with a score of 692.7, followed by Grace Taschuk, 18, of the Bolt Action American Legion Post 334 Jr. Rifle Club in Minnesota with 691.8.

Taschuk came to the event with a unique piece of apparel on her head – a visor signed by 19 Olympic athletes, including the great Lones Wigger, who was a two-time gold medalist and a member of Team USA from 1968 to 1980.

“It’s the one I treasure the most,” she said.

During her first year as a competitor at the Junior Olympics, she medaled in her age group and was awarded by none other than Lones Wigger himself, who later gave her another medal when she became older.

“He definitely holds a special place,” she said. “It’s amazing.”

She started the endeavor after seeing a friend from Minnesota who originally started the tradition. Taschuk thought it was a great idea and began collecting signatures at different events. Helping her fill the visor was her coach, Pete Durben, who attended the 1992 Olympics. He would introduce Taschuk to his friends, allowing her to get in close and nab those autographs.

She admits that the visor in now “a little grimy,” but that’s only because she’s worn it at every match she’s ever shot – and she doesn’t plan on letting it go any time soon.

“I’m keeping it for myself – I’m a little selfish with it,” she said with a laugh.

The National Air Rifle Championship is a three-position event, where sporter and precision competitors fire two days of competition – the Junior Olympic Nationals, followed by the CMP Nationals. Competitors fire qualifying scores each day, with the Top 8 competing in a final on the line to determine winners. The top male and female competitor over the two days also receive places on the USA Shooting junior team.

Braden Peiser, 14, of Texas Hill Country Shooters in Texas, set a new 3×20 plus Final Age Group III National Record in his win in the Junior Olympic competition, with a score of 698.4. Coming in second was Philip Becker, 17, of Granbury High School in Texas, just one point behind Peiser with 697.3. Rounding out the Top 3 was Gavin Barnick, 16, of the Minnesota Centershots, with his score of 696.2.

Top teams of the event were Lincoln Lead Heads, Texas Hill Country Shooters from Texas and Dallastown MCJROTC from Pennsylvania.

Following the lead of last year’s event with even more participation in 2019, an SH2 competition was also held for para-athletes during the National Championship. Winning the match and setting a new 3×20 plus Final National Record of 696.2 was Madison Champion, 17, of Greenville High School Navy JROTC in Texas. Champion also incredibly fired four more National Records at the event: 3×20 score of 594-47x, 20 Shots Kneeling score of 198-16x, 20 Shots Standing score of 197-12x and a Finals Score of 102.2.

In addition to the thousands of dollars in monetary endowment awards provided to winning teams from MidwayUSA, the CMP provides $1,000 scholarships to the Top 3 highest scoring graduated seniors of the event. Grace Taschuk, Mallory Simons of Yellowstone Rifle Club in Vermont and Kim Jettenberg of the Borealis Bullseyes in Alaska earned this year’s scholarships.

The top male and female competitor over the two days also received places on the USA Shooting junior team. Earning spots this year were Philip Becker and Grace Taschuk.

For a complete list of results of the CMP National Three-Position Championship and the National Junior Olympic Championship, visit https://ct.thecmp.org/app/v1/index.php?do=match&task=edit&tab=results&match=18227&tab=results.

Photos of the event can be viewed and downloaded for free from the CMP Zenfolio page at https://cmp1.zenfolio.com/f960619785.