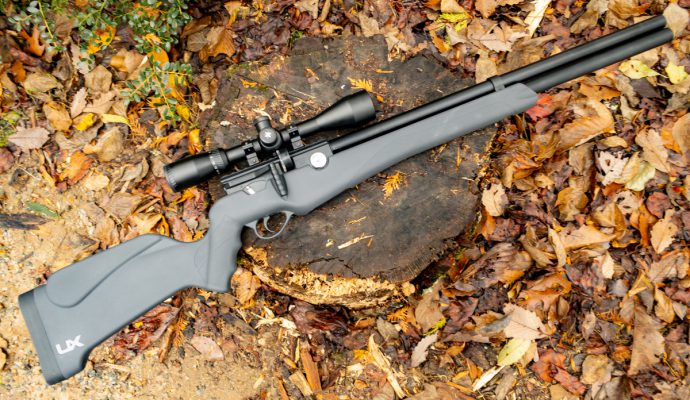 PCP rifles will spoil you rotten. At least that’s been my story. Without all the reciprocating springs, gears, and assorted moving machinery, they’re smooth as silk to shoot. A regulated rifle releases the precise amount of compressed air needed for each shot, so they’re not only butter slick but consistent shot to shot. Assuming you’ve got a good barrel and trigger, there’s no reason you shouldn’t get just peachy performance from a PCP.

The only downside is you have to come up with mucho compressed air to feed the beast. A few short years ago, that could be problematic depending on where you lived. Unless you wanted to invest four figures in a home air compressor, you were at the mercy of local dive shops or paintball centers to fill an expensive carbon tank, which also cost you a pretty penny.

Affordable portable compressors have helped the PCP market explode, but Umarex is making the world of PCP shooting even more accessible with the Umarex Origin 22 air rifle. Well, actually it’s not a rifle. It’s more of a kit. You see, the Origin 22 comes with a high-pressure hand pump capable of delivering 4,500 psi air directly to the rifle, so you have your own infinite compressed air supply right in the box.

Lest you think this is a simple marketing bundle, be sure to read the package description and specs carefully. The point of the Origin 22 system is to offer a rifle and fill mechanism that allows you to shoot more and fill less. Umarex has engineered some kind of VooDoo into the rifle’s air reservoir mechanism to allow full-power operation with less incoming air. With something called the Ever-Pressure system, available air in the tank is pressurized within, making whatever quantity of gas is present more useful. Ipso facto e. pluribus unum, the system does more with less air input required. That means less pumping on your part.

With just a few cycles using the included 4,500 psi hand pump, you get a legit full-power shot. Additional pumping won’t increase velocity or power, but it will give you more shots. With about 100 cycles of the hand pump, you’ll get about 40 shots before it’s time to refill the onboard air cylinder. The company claims the Origin 22 rifle requires just 50% of the air input of comparable rifles. The rifle itself is a solid piece of gear. The air reservoir is a full length and slender tube slung under the barrel. Paired with a polymer stock, the result is a smooth handling and surprisingly light gun that’s easy to shoot offhand. I found I liked the molded-in vertical pistol-like grip and found it easy to shoot off the bench with my thumb floating free. I like to rest the thumb lightly on top of the receiver when shooting for precision. Your mileage may vary.

A built-in receiver rail allows easy attachment of standard rings. The primary rail is standard Picatinny but an additional 11mm rail is machined in too so you can use either size scope rings. The two-stage trigger is adjustable in three different ways, using Allen screws accessible through the trigger guard. You can adjust the overall length of trigger travel, the weight of the pull, and the over-travel distance. Using a combination of 1.5 and 3mm Allen wrenches, knock yourself out and create your personalized trigger.

Out of the box, I measured the pull weight at precisely 2-1/2 pounds. The first stage offered about 1/8″ of near-zero-weight take-up, followed by a crisp break and no detectable over-travel. I didn’t make any adjustments as I found the trigger action just peachy as it was.

The fill mechanism is located under the forend, just forward of the trigger guard. The system uses a probe fill and the probe itself has a Foster-type connection that attaches to the female Foster connection on the include hand pump. You’ll also find that connection type common on compressors and larger air cylinders. You shouldn’t have to buy any extra adapters to get the connection you need between your alternate filling systems and the Origin 22. I shot in the clean mountain air of North Carolina using the H&N Baracuda Match pellets — 21.14-grain round nose projectiles. Using a portable Doppler Radar chronograph, I measured average velocity of 758 feet per second right at the muzzle. On my 30-yard outdoor range (with little wind) I set up a prone shooting position using my pack and a rolled-up sweatshirt and fired some groups for accuracy. When the lack of smoke cleared, I measured average five-shot group size of .62 inches.

The MSRP of the Umarex Origin 22 system is an aggressive (in a good way!) $349.99 — and that includes the 4,500 psi hand pump — so you’re ready to start shooting a PCP from the get go. Just add pellets of your choice and you’re off to the races.