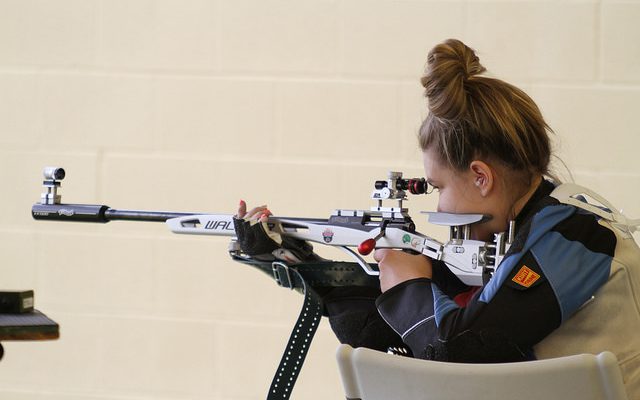 This WSPS World Cup marks one of three opportunities for athletes to earn Paralympic Games quotas in 2019. A quota is essentially a country’s ticket for an athlete to compete in a given event at the Paralympic Games. The United States is bringing five Paralympians and some rising talent to Al Ain and will be looking to make up some ground in the quota department as the USA Shooting Team has only secured one quota thus far in the R6 (Mixed 50m Rifle Prone SH1) event.

At the World Cups in 2018, USA Shooting athletes narrowly missed out on quotas and will look to grab them in Al Ain. 2018 USA Shooting Paralympic Athlete of the Year Taylor Farmer (Castalia, Ohio) narrowly missed out on two quotas when she won bronze medals in the R2 (Women’s 10m Air Rifle Standing SH1) and R8 (Women’s 50m Three-Position Rifle SH1) events at the World Cup in Chateauroux, France in November. At the Robert Mitchell Rifle Championships which concluded this weekend, Farmer was posting world-class scores in R3 (Mixed 10m Air Rifle Prone SH1) where she shot the top cumulative score, shooting a 631.8 on the first day and 630.8 on the second. Check out this feature from Team USA/U.S. Paralympics about Farmer: https://origin-azure4.teamusa.org/US-Paralympics/Features/2019/February/12/A-Star-On-The-Rise-Para-Shooter-Taylor-Farmer-Has-Another-Shot-For-Paralympic-Quota-This-Month.

The youngest athlete on the team, 18-year-old Stetson Bardfield (Colorado Springs, Colorado), has been posting world-class scores recently, including shooting a score of 632.1 on day one and 630.0 on the next at last weekend’s Robert Mitchell Rifle Championships.

All Finals for this World Cup will be streamed live on the World Shooting Para Sport website (a complete schedule can be found here as well): https://www.paralympic.org/shooting. Results from Qualification and Finals can be found here: http://results.sius.com/Championships.aspx.

About USA Shooting: USA Shooting, a 501c3 non-profit corporation, was chartered by the United States Olympic Committee as the National Governing Body for the sport of shooting in April 1995. USA Shooting’s mission is to prepare American athletes to win Olympic medals, promote the shooting sports throughout the U.S. and govern the conduct of international shooting in the country. Check us out on the web at usashooting.org and on Twitter at twitter.com/USAShooting.