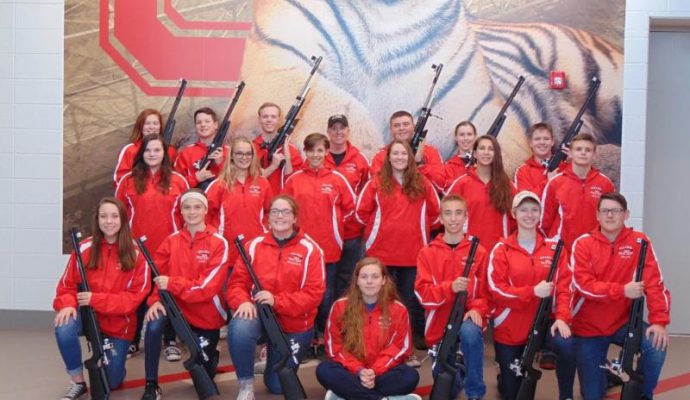 Ozark AJROTC (Ozark, MO) are the champions of the second annual NationalAir Rifle New Shooter League. They also won the inaugural season, and moved to an overall record of 16-0 over the course of two seasons. Pacific MCJROTC (Pacific, MO) placed in second, with their only defeat of the year coming against Ozark. Norview NJROTC (Norfolk, VA) placed third.

The New Shooter League rewards teams not just for the competitive success, but also on participation and improvement. This year 36 teams won awards, 12 for showing improvement. Kaiser High School (Honolulu, HI) showed the most growth over the course of the season, improving by 17 points per game. Each week they beat their previous high score.

Shooter’s Technology LLC, the makers of the Orion Scoring System, manages the League. The New Shooter League is an offshoot of the largest air rifle league in the world, the National Air Rifle League, but for first year athletes and only for the Sporter discipline. The League allows teams from throughout the nation to compete virtually, with eight games over the course of 10 weeks.

In each game the teams compete in what is known as a Three-Position Air Rifle match. The match is modeled after Olympic Rifle competitions but adapted to high school age athletes. Each athlete will shoots 10 shots in three different shooting positions, prone, standing, and kneeling. Each shot is worth a maximum of 10 points. The sum of points scored in the 30 shots is the athlete’s total. The team score is comprised of the best four athletes from each team.

The second annual season of the National Air Pistol League has concluded. Palmyra Sportsmen’s Association won the league despite spending much of the season in second place. Palmyra was able to move up to first place after a week seven win over Maspenock Rod and Gun Club. This is Palmyra’s second straight league championship, and Maspenock’s second straight second place finish. Palmyra finished the season undefeated with an 8-0 record. NoVA Sharpshooters rounded out the top three with a strong finish, moving up the ranks in the second half of the season.

Shooter’s Technology LLC, the makers of the Orion Scoring System, manages the League, which allows teams from throughout the world to compete virtually, with eight matches over the course of 10 weeks. Athletes of all ages are welcome to participate in the League.

The League is designed to help developing athletes grow. Six teams will be recognized for their performance in the League with a banner and team medals, including Palmyra, Maspenrock, NoVA Sharpshooters, Demmer Center Air Pisol Spartans, Lafayette Gun Club, and GRRP Air Pistol Spartans. Seaford NJROTC showed the most improvement over the course of the season. They started the season shooting scores in the 900s. By the end of the season they were shooting scores around 1200, including a high score of 1209.

The league consists of a 10 week 8 game schedule, starting in late January. In each game the teams compete in a 40 shot air pistol match. This competition is nearly identical to the Air Pistol events in the Olympic games. Each athlete will shoots 40 shots, with each shot worth a maximum of 10 points. The sum of points scored in the 40 shots is the athlete’s total. The team score is comprised of the best four athletes from each team.