You are here: Home / Competition / Ontelaunee Jr. Rifle Team Gets Back to Competition with Strong Showing 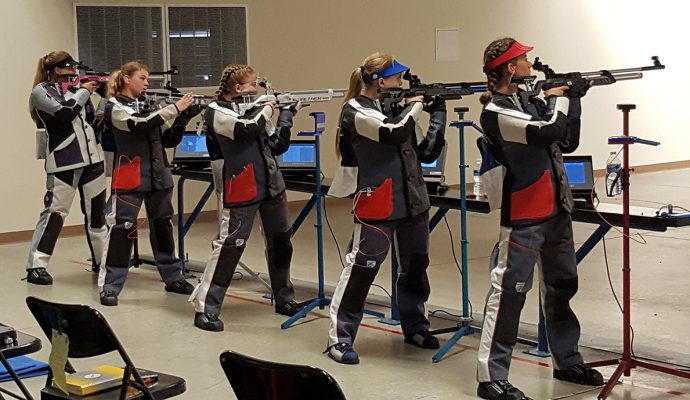 With their excellent showing, the team will move on to compete in the CMP’s Virtual Championships, another postal event that will serve as a supplement to the usual Regional Matches. Overall high teams and individuals of the CMP Virtual Championships qualify for the 2021 CMP Three-Position National Championship, held in Ohio and Alabama this summer.

Last year, though there was no formal National event held, the Ontelaunee Jr. Team earned the overall score amongst precision teams in the CMP Three-Position Postals. In 2018, Ontelaunee earned second in the National Championship – the team’s highest finish since the CMP match began in 2013.

“The strength of our team over the years comes from its diversity,” said coach Tab Rhode. “The range of ages also helps our team grow and gel. The older shooters act as role models to their younger teammates. This gives the younger ones someone to learn off of and helps motivate them to be more active in the sport.”

Current Ontelaunee members come from different backgrounds, schools and even different states – some traveling over an hour from New Jersey just to participate in marksmanship with like-minded peers.

Though the CMP Three-Position Postal Match is an annual tradition for several junior air rifle teams around the country, seeing the 2021 posted results gave the Ontelaunee Jr. Rifle Team many reasons to celebrate – more than just for their outstanding performances on the firing line. The event also marked a return to normalcy and a year’s worth of hard work and patience in and outside of the range.

“The onset of the COVID-19 pandemic had quite a few influences on our team,” Rhode said.

When it began to expand its reach to the United States, the Ontelaunee practices were suspended. Matches the team usually attended, like the CMP Nationals, Junior Olympics and USA Shooting Nationals, were suddenly cancelled – with no clear inclination as to when they would be resuming.

It was a devastating reality for both the young athletes and their coaches.

“Motivation became a tough task. Longer-term and mid-term goals had to replace the non-existent short term ones,” Rhode admitted. “Our team members trained hard for these matches the previous year, and they couldn’t look forward to them anymore.”

The club where the team trains was shut down for almost five months, with no activities permitted. Once finally back into the range, new obstacles emerged, such as limited range access for athletes at one time. The combination of Ontelaunee’s range size of six firing points and social distancing requirements made finding time for everyone to use the facility a difficult undertaking.

Fortunately, some solutions to the issues they faced, like setting up assigned block times for practice, was advantageous in a way they had never realized before.

“We believe that we will continue this practice in the future because it allows things to run smoother,” Rhode said. “We no longer have athletes waiting around the club for two hours for a chance to practice while they could be spending that time on homework or other activities.”

He went on, “We, as coaches, also can tell who is coming to practice and when, allowing us to modify how we run practice.”

Knowing the opportunities lost in 2020, the Ontelaunee Jr. Team members and coaches look to the future – ready to take advantage of every opportunity to compete. Upcoming matches the team plans to fire in include the CMP Smallbore Postals, Junior Olympics and, of course, the CMP Virtual Air Rifle Championships (along with as many local smallbore and air rifle matches as they can find).

“Tom (Fister, another Ontelaunee Jr. Rifle coach) and I share the goal for all of the members of Ontelaunee’s team,” Rhode said. “We simply want to teach each athlete the knowledge, tools and skills they need to excel at the sport. And, if they so choose, to have the opportunity to continue shooting at the collegiate level and beyond.”

The Ontelaunee Jr. Rifle Team, a division of the Ontelaunee Rod & Gun Club, has been in existence for over 50 years, beginning in local smallbore prone matches. About 15 years ago, the team moved into three-position for those who were interested in learning the discipline – with involvement in air rifle developing five years later.

Tom Fister became coach of the team 12 years ago, when his daughters took interest in the sport, with coach Tab Rhode joining on six years ago to also help out the team after his own daughter joined the team.

Learn more about all of the programs offered by the Ontelaunee Rod & Gun Club by visiting their website at https://ontelaunee.org/.