You are here: Home / Industry / One-Of-A-Kind Legendary Movie Replica To Be Auctioned Off to Benefit Student Air Rifle Program 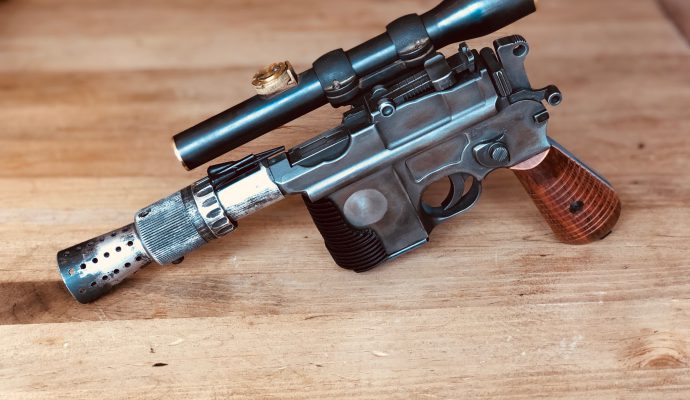 Fort Smith, Arkansas (May 1st, 2019)—Umarex USA is set to auction off a unique, one-of-a-kind movie prop replica of the famous DL-44 blaster to benefit the Student Air Rifle Program.

Umarex USA has been a proud supporter of the Student Air Rifle (SAR) Program from its inception. This 501c3 non-profit program provides an introduction to the lifetime sport of target shooting for school-aged youth in grades 4 through 12. The SAR program is currently offered in four U.S. states and is in talks with several other states for continued expansion.

Each year May the 4th brings a flurry of posts to social media. This year, Umarex Airguns teamed up with Guinness World Record holder Chris Turek, of UpNorth AirGunner, to build a legendary movie prop replica very similar to the DL-44 blaster carried by a pilot of a rebellious alliance in a series of galactic based movies. This highly crafted fully functional replica airgun will be auctioned off via GunBroker.com with the proceeds going entirely to the Student Air Rifle Program. Chris is no stranger to working with the Umarex Legends M712, a replica of the historic German Broomhandle. Last year he made a blaster which he documented on his social media platforms. “The feedback I got when I posted the video of the Umarex M712 conversion to the blaster replica was awesome. When Umarex approached me to build another blaster in support of this fundraiser for the SAR program, I was 100 percent on board.” Turek said.

Mark Davis, Social Media Specialist with Umarex USA, said “We are thrilled to be a supporter of the SAR program and very excited that Chris was onboard with crafting a custom replica that will both draw attention to the SAR Program and raise money for them as well.”

While the unique DL-44 blaster replica is likely to generate a respectable price at auction, Umarex USA wants to maximize the money raised by providing alternative methods for people to contribute to the SAR Program. Umarex USA donates a portion of each sale of an Umarex Embark air rifle, the air rifle exclusively used in the Student Air Rifle program. Additionally, each social posting will have a link to the donation page at StudentAirRifleProgram.org.

The Auction of this custom replica will be hosted on GunBroker.com and is scheduled to begin on May 4th and end on May 10th.