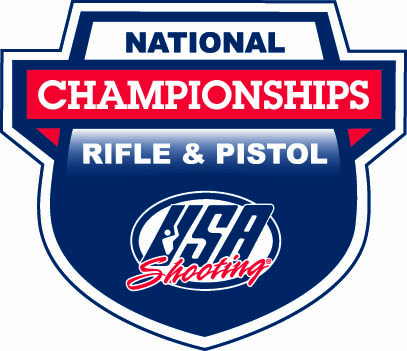 (COLORADO SPRINGS, Colorado – June 24, 2019) – On a day to celebrate the Olympics, several Olympic hopefuls rose to the occasion on Sunday with action spread across all disciplines from Junior Olympic Shotgun in Colorado Springs to the Rifle/Pistol National Championships in Fort Benning, Georgia.

Leave it to a Rebel to mess up the Horned Frog challenge match that was going on in the Women’s Air Rifle Final. The former Ole Miss Rebel Weisz (Belgrade, Montana), who finished second in 2019, fought off the purple attack that included five current or former Texas Christian University Horned Frogs including Angeline Henry (Fort Worth, Texas) that challenged Weisz to the very end, before falling by .9 points overall when Weisz won the Final to go along with her match-high score of 627.2 on day two. Mary Tucker (Sarasota, Florida), who is set to enter the University of Kentucky later this summer, placed third.

Henry would come back in the Junior match to earn the top podium position by winning the Final and recording the top Qualification match score on day one of 626.2. It’s her second straight Junior national title. Her Horned Frog teammate Hemphill would finish second with Tucker coming through with another bronze-medal performance in the junior ranks as well after shooting a match-high 627.0 on day two.

It was an U.S. Army Marksmanship Unit (USAMU) sweep in Men’s Three Position Rifle as the soldier athletes took advantage of their home range conditions. Paced by his match-high 1176 on day one, Tim Sherry (Highlands Ranch, Colorado) earned himself a national title by two points over two-time Olympian Michael McPhail (Darlington, Wisconsin). Patrick Sunderman (Farmington, Minnesota) finished third, four points back of Sherry.  Army World Class Athlete Program (WCAP) athlete Nick Mowrer (Butte, Montana) continues to dazzle in two disciplines. Sunday it was in Rifle with him winning the Final with a world-class 457.0 that helped move him into fourth overall.

Jared Eddy (Midland, Georgia) is the Men’s Three-Position Rifle Junior National Champion after finishing fifth in the Open Final. Eddy finished with a two-point advantage on Kellen McAferty (Littlerock, Washington), who finished two points behind Eddy and in sixth position in the Open Final as well. McAferty had the high Qualification score over the two days with a 1168. Earning the bronze medal was Antonio Gross (Ontario, New York), climbing into that position with a win in the Final.

Next up at the 2019 USA Shooting National Championships is Air Pistol, Women’s Three-Position Rifle, and Men’s Air Rifle with those podium awards being decided Wednesday, June 26.