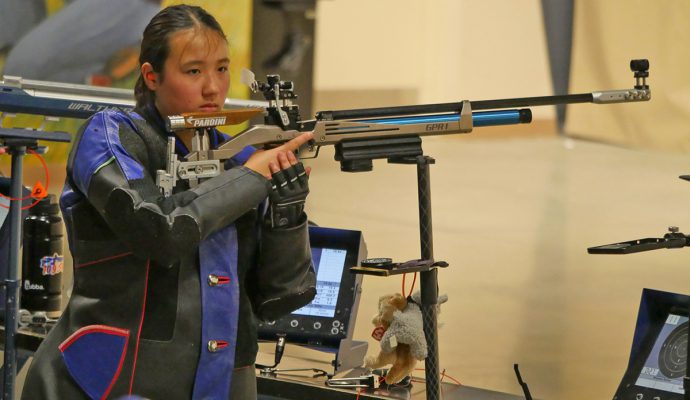 The Civilian Marksmanship Program (CMP) resumed its Monthly Matches Sept. 18, 2021, at both of its static locations in Anniston, Alabama, and Camp Perry, Ohio – the first fired since May. The indoor air gun event, offered several times throughout the year, features a lineup of air rifle and air pistol competitions for all ages and skill levels.

Over 200 entries were seen between the two venues in September that showcased some of the most talented athletes in the country today, including 2021 Tokyo Olympians like rifle/pistol athlete SGT Nick Mowrer (who made history this year), pistol competitor SSG Sandra Uptagrafft and even rifle silver medalist Lucas Kozeniesky.

Mowrer, 33, of Colorado Springs, Colorado, led the International Pistol Monthly Match at Camp Perry, with Uptagrafft, 50, of Phenix City, Alabama, finishing a close second. Kozeniesky, 26, of  Colorado Springs, earned second in the International Rifle Match at the location, as junior Emme Walrath, 15, of Kenosha, Wisconsin, bested his score by only tenths for the overall win.

Other national-level competitors like SPC Tim Sherry, 27, of Fort Benning, Georgia, were frontrunners of events – overtaking the International Rifle category in Anniston. Sherry, a member of the Army Marksmanship Unit, was the 2021 National Smallbore Prone 6400 Aggregate and Iron Sight Champion during Camp Perry National Matches in July.

Notable showings were also given by juniors Amarissa Jackson, 18, of Winthrop Harbor, Illinois, and Mallory Johnson, 15, of Cookeville, Tennessee, who led the 3×20 Sporter matches at Camp Perry and Anniston, as well as Elysa Walter, 17, of Sugar Hill, Georgia, who earned the 3×20 Precision Match overall win in Alabama. Each athlete has competed at multiple CMP matches, including the National Postal Competitions.

A worthwhile opportunity to earn valuable competitive experience and learn alongside an array of exceptional athletes, only two Monthly Matches remain for the 2021 season: Oct. 9 and Nov. 13. Learn more about the CMP’s Monthly Matches by visiting https://thecmp.org/ranges/cmp-competition-centers/monthly-air-rifle-and-air-pistol-matches/.

And don’t forget – The CMP South Competition Center and the Gary Anderson CMP Competition Center conduct Open Public Nights every week, where individuals of all ages are welcome to try their hands at air gun. The ranges are open Tuesdays and Thursdays from 5 p.m. to 8 a.m. EST at Camp Perry and from 4 p.m. to 7 p.m. CST in Anniston. Guests may also visit the ranges by appointment Monday through Thursday. Learn more about the ranges at https://thecmp.org/ranges/cmp-competition-centers/.