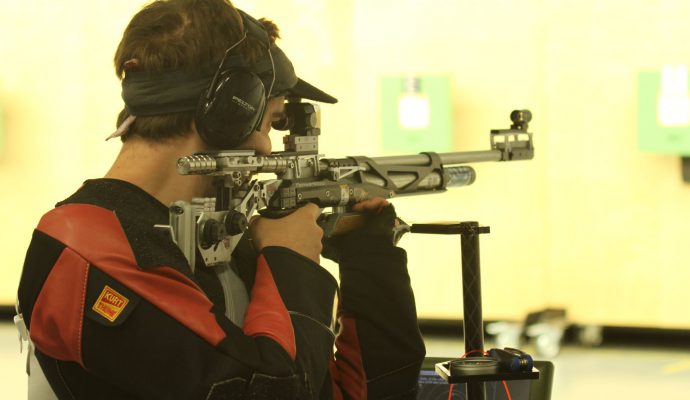 (COLORADO SPRINGS, Colorado – June 28, 2019) – A little more than a year before the Olympic Games and this 2019 Rifle/Pistol National Championships has been a show of Olympic talent as they get primed for another Olympic attempt while competing in Fort Benning, Georgia.

Lucas Kozeniesky (Fairfax, Virginia) and Keith Sanderson (Colorado Springs, Colorado) made it four Olympic veterans earning titles to date, joining Nick Mowrer (Butte, Montana) and Ginny Thrasher (Springfield, Virginia) who did so with ease on Wednesday.  There was a bit more drama involved Thursday, however. Kozeniesky consistency was the key to his victory over the two-day match as he was the only shooter in the field to shoot above 626 in each of the two Qualification matches.  The U.S. Marksmanship Unit’s Tim Sherry (Highlands Ranch, Colorado) put up the biggest mark of all Wednesday with a 629.3, but could not duplicate that Thursday, shooting a score 6.2 points lower. Despite winning the Final over Kozeniesky on a dramatic final shot, it wouldn’t be enough in the end and he’d have to settle for second.  Still, his shooting skill has been superlative at these Nationals after earning the national title in Three-Position Rifle.

For Kozeniesky, that’s now his third Air Rifle title in four years having previously won in 2016 and 2017.

“Air gun was a good experience for me,” Kozeniesky said.  “I have been working hard as we are heading into Olympic Trials. Pan Ams is next month and there are still things to be improving on to get to where I need to be. Overall, I’m pretty happy with my progress and my performance this week. This is my sixth Nationals appearance and my third National Title so that’s pretty neat.” University of Kentucky sophomore Will Shaner (Colorado Springs, Colorado) earned the bronze medal and then would later climb one step higher in the Junior competition with a silver medal, but only by the slimmest of margins — .4 points to be exact. Shaner was 1.9 points back of high school standout Matt Sanchez (Tampa, Florida) and would win the Final to Sanchez’s fourth-place finish, but like Sherry before, it just wasn’t quite enough on this day.

Sanderson earned his seventh national title in Rapid Fire Pistol, his first since 2015. Behind a strong 584 Wednesday, he held a 10-point advantage on the other Finalists and had secured the win before the Finals began.  He’d go on to win the Final too, but not before winning a shoot-off with Henry Leverett (Bainbridge, Georgia), 5-4. Henry’s older sibling, Jack, would finish third.