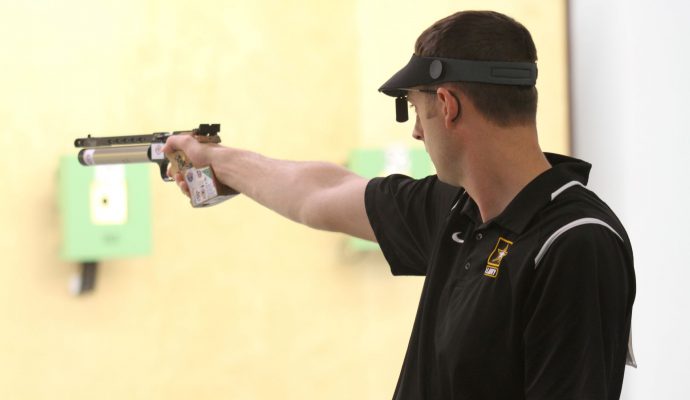 Olympic champion Ginny Thrasher (Springfield, Virginia), 2012 Olympian Nick Mowrer (WCAP/Butte, Montana) and Olympic hopeful Alexis Lagan (Boulder City, Nevada) were crowned National Champions in Three-Position Rifle, Men’s Air Pistol and Women’s Air Pistol at Pool Range Complex in Fort Benning, Georgia. Most notable was the dominating way in which each of them climbed to the top of the podium.  Margins of victory of 15, 19 and 24 points, earning national titles before the Finals, and yet coming out and dominating their Finals as well with nothing really on the line.

In Three-Position Rifle, Thrasher used a U.S. record 1181 on Day 1 to set the pace and then followed that with a strong 1175 on Day 2 to claim a 10-point advantage over the two Qualification matches.  By winning the Final, she earned eight extra points towards her score. Thrasher wouldn’t claim the Finals lead until the last position of standing.  Zaun was the Finals leader after the first position of kneeling while Rachel Garner (Celina, Texas) would have the lead after the kneeling portion of the match.

“My performance this week feels like a lot of hard work paying off and gave me a lot of confidence in my positions and mindset going into Pan Ams next month,” Thrasher stated.  “I’m really excited to keep working and improving as I move to the Olympic Training Center to continue as a professional athlete.”

It was a war of attrition for the 16-year-old Zaun as the lone junior to make the Open final only to have to turn right around and compete in the junior Final on a hot, muggy day in Fort Benning, Georgia. Having built a 10-point cushion in Qualification, the Final proved inconsequential, but she still wound up finishing third in both. West Virginia University junior Sarah Osborn (Hampton, Virginia) finished second while Emily Stith (USAMU/Jacksonville, Florida) wound up third.

Don’t let the 19-point margin of victory for Mowrer fool you on how hard he worked to create the type of separation he did. Despite outshooting the field by 16 over the two Qualification matches including a top-notch 581 on Day 2 and a combined 13 more center-10s than anyone else, Mowrer admitted he never did get a good feel for what he was seeing in the sights. Scary to think what he might do when he does.

“Today and yesterday was hard work, terrifying in fact,” Mowrer explained. “Terrifying because the sights were not giving me the feedback I wanted to stay warm and fuzzy. The hard work was sticking to the process and being disciplined to put the gun down. Also, staying on my sights and having the confidence that no matter how scary, the shot was going to be in the middle was a real challenge; it was not fun. There have only been a few days that I would say that, because I love how fun shooting is. This however was work and the rewarding part is that my training allowed me to get rewarded for that work.

“Moving forward, this competition was a good stepping stone and confidence builder moving into the Pan American Games and later World Cup Rio,” he added. “Hard work is far from over, but the training is working so I’ll keep working hard and with any luck it will get easier as confidence builds.” Four junior competitors made the Men’s Air Pistol Open Final including 17-year-old Hunter Battig (NTC/Colorado Springs, Colorado), who finished second to Mowrer. After finishing just one point away from third in Open, Simon would walk away with the National Junior title by an eight-point margin over another Open finalist, The Ohio State University’s Sam Gens (Andover, Massachusetts). Paul Kang (Bridge Jr./Los Angeles, California) finished third after prevailing in a shoot-off against Battig, 10.4 to 8.4. High J2 was Battig while Remington Smith (Ashburn, Georgia) claimed the high J3 score.

Readily admitting her struggles in Air Pistol, Lagan got her groove back in a big way, opening the competition with a big-time score of 581, which is a new national record, eclipsing any previous score by seven points. Her 577 Wednesday would have been the high national mark as well since women have been shooting 60 shots in Air Pistol since 2018. That accuracy meant she’d walk into Finals with a 22-point advantage and then she’d put the finishing touches on a dominating performance with the Finals win.

“Air pistol has been such a struggle for me the lately,” Lagan admitted.  “I have been working with Jason [Turner – coach] and Raymond [Pryor – sports psych] to find a strategy to get over this slump, and I think we have had a major breakthrough with this match. I’m looking forward to applying these notes in my preparation for Olympic Trials.”

The junior Choe would finish second to Lagan in the Open match after a shoot-off with Sandra Uptagrafft (Phenix City, Alabama) after they were tied following the Final.  Choe would then secure a nine-point margin of victory over Katelyn Abeln (Douglasville, Georgia) to capture the junior title as well. Ada Korkhin (Brookline, Massachusetts) was third while Caitlyn Yi and Annabell Yi (Irvine, California) earned high J2 and J3 honors.

First-day competition took place in Men’s Air Rifle and Rapid Fire Pistol. Tim Sherry (USAMU/Highlands Ranch, Colorado) is working on getting himself another national title after already picking one up in Three-Position Rifle. He shot a strong 629.3 to open up a 2.4 point advantage over 2016 Olympian Lucas Kozeniesky (Fairfax, Virginia).  Junior competitor Matt Sanchez (Tampa, Florida) sits in third, but by just .1 points over Jean-Pierre Lucas (Oxford, Missippi).

With a 584 on the day, Keith Sanderson (Colorado Springs, Colorado) jumped out to a four-point lead in Men’s Rapid Fire Pistol over his two-time Olympic teammate Emil Milev (Hilliard, Ohio). Henry Leverett (Bainbridge, Colorado), who earned an Olympic Quota earlier this year, is third with a 578, one point ahead of his brother Jack.  Those events will conclude Thursday.