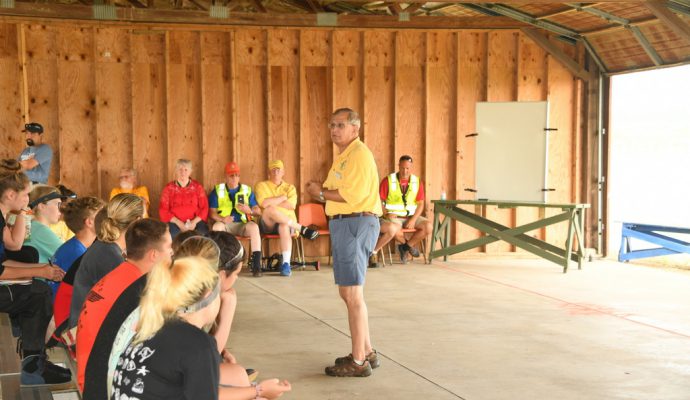 In order to help ensure the cultivation of marksmanship at the ground level, the Civilian Marksmanship Program (CMP) appoints State Directors to oversee programs in each of the 50 states. The mission of the State Directors is to provide leadership, resource and program information, coordination, networking, motivation and publicity for junior shooting within his or her state. Found out who your CMP State Director is by visiting https://thecmp.org/training-tech/state-director/. Feel free to contact your State Director at any time with questions, comments or concerns.

Russ and Vickie Evans have a long history together. The pair met when they were only kids at a church Bible school when Vickie was in 7th grade and Russ was in 8th grade. The two went on to date throughout high school and college, eventually marrying, and recently celebrated 50 years of marriage in 2019.

Their teamwork in marksmanship is also rich with experience in leading youth athletes in a variety of disciplines. Along with serving as the CMP State Directors for Ohio since the beginning of the program, they also lead the National Matches Jr. Camp program – an endeavor they’ve been involved with for over 30 years.

“Anyone who learns to become competitive with others has won outstanding life skills, even if they never win a medal,” Russ said. “Teaching young adults to believe in their ability to do a skill that not everyone can do is very rewarding for the coaches as well as the athletes.”

Russ has always shown an interest in marksmanship, hunting and shooting since he was 12. He went on to participate in black powder competitions after college, and, even now, Russ and Vickie shoot .22 rifles, just for fun. One of their biggest passions is assisting youth athletes in finding programs as well as helping programs get started at local clubs.

Residing in Northeast Ohio, Russ began his marksmanship administrative career in 1985 with a local junior smallbore program at the Fish & Game Club of Vienna after his son, Russell, joined the team. In the years following, Russ and Vickie added an additional six to eight local clubs to manage in the Northeast Ohio Jr. Rifle League.

In 1986, when young Russell was 12, he attended the National Matches Jr. Smallbore Camp at Camp Perry, Ohio. While Russell learned smallbore techniques, Russ attended a coaching school in the mornings before assisting at the Smallbore Camp in the afternoons.

The next year, the camp became a family affair when not only Russ and Russell returned, but Vickie worked as a support officer and their daughter Jennifer also signed up as a camper. For several years after, Russell and Jennifer both attended the camp and moved on to the National Smallbore Matches, as Russ and Vickie continued to volunteer at the National Matches Jr. Smallbore Camp.

In 1992, Russell entered the Naval Academy rifle team, and Jennifer shot for The Ohio State Rifle Team. Though his children were grown, Russ returned to the Junior Camp at Camp Perry year after year as a coach. In 1993, Russ, along with Vickie, officially took over the National Matches Jr. Smallbore Camp and have been in charge ever since.

Outside of the National Matches, Russ and Vickie hold a Jr. Sectional for four rifle disciplines each year. They have also worked for the Ohio Rifle & Pistol Association (ORPA) since 1990, running Ohio Jr. & Adult indoor and outdoor smallbore and air rifle matches. The two started the ORPA Jr. Program’s Annual Raffle for a CMP M1 Garand, with the proceeds divided between the state’s junior programs. The raffle has proven to be a good source of funding for Ohio junior shooters.

Russ and Vickie have also been able to obtain funding through Ohio Department of Natural Resources and Friends of the NRA grants, which supplement what is required to fund our programs. Russ is a believer that juniors who get to travel to compete at matches away from their home club and attend camps will continue to participate in junior programs.

“When we coach and teach young adults in shooting sports, we stress safety first, disciplined fun second and let’s see how good we can get,  third,” Russ said. “Everyone who learns a sport skill, makes friends and has a great time doing it, is winning in life. Shooting teaches safe thinking, self-discipline, responsibility, confidence and requires planning and teamwork skills.”

To learn more about Russ and Vickie Evans or to contact them, visit https://thecmp.org/cmp-state-director/OH/.