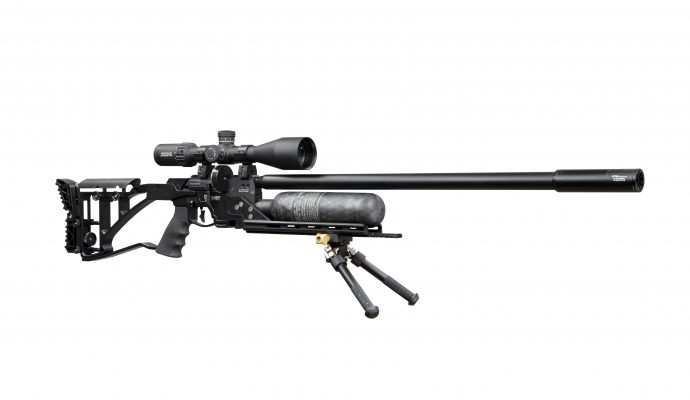 The dramatic evolution of airguns has ramped up demands from shooters worldwide and we have seen an increased desire for more air flow and power in our air rifles. Whereas other FX rifles can more easily add plenum space and valving for these demands, a traditional rifle like the FX Crown was limited for these demands… until now! The FX Crown MKII brings more power and even more capabilities to an already near perfect platform. The increased power available in the MKII comes down to a combination of valving, porting, and plenum space. The plenum of the FX Crown MKII has increased 28% over the previous model! This larger plenum works in tandem with the porting and a new larger valve on the MKII (6.5mm valve). The combination provides spectacular results. The FX Crown MKII has some new stock options. FX Airguns has teamed up with famed Norwegian rifle stock maker GRS to provide the first ever GRS rifle stock for an FX Airgun. GRS builds highly adjustable laminate stocks recognized globally as an innovative premium brand. The GRS FX Crown stocks are dedicated right or left-handed with the famed GRS ergonomic grip. The GRS grip, offset and angled; provides unsurpassed shooting comfort. They feature tool-less push button adjustments for both cheek riser and length of pull. Everything to tailor-fit your shooting experience. The FX Crown MKII is also offered as a stripped-down base model perfect for pairing with the recently released Saber Tactical Crown Chassis. This ambidextrous chassis is packed with features including an extended Arca Swiss rail, foldable stock, built-in detachable bag rider, adjustable buttstock, and other popular features. This will certainly be a highly popular and sought-after Crown configuration, particularly for bench shooters. The Saber Tactical Chassis is a separate item available from Saber Tactical dealers (most FX dealers also carry Saver Tactical) that can be added to any generation of Crown. A full review of this gun and it’s features features Rick Rehm of Shooter 1721 with Chad & Eric from IraqVeteran8888 will be released later today showing off the Crown MKII out to 300 yards!

The rest of the features of the FX Crown remains unchanged: the power adjuster, valve adjustment, externally adjustable AMP regulator, ability to change calibers and twist rates through the Superlight Smooth Twist X (STX) barrel and Superior STX liner standard. With all this as well as the highest capacity magazine in its class, the FX Crown is solidified as the most versatile and robust sporter stock PCP air rifle available.

The FX Crown MKII is an inline change with units already shipping to dealers worldwide. Any customer with an existing pre-order who has been waiting for their FX Crown will receive this new updated model (no need to call and change your order). The Crown is available in the following configurations (with various stock options)

Pricing in the US as follows for the Crown MKII Standard & Standard Plus (add $100 for Continuum):