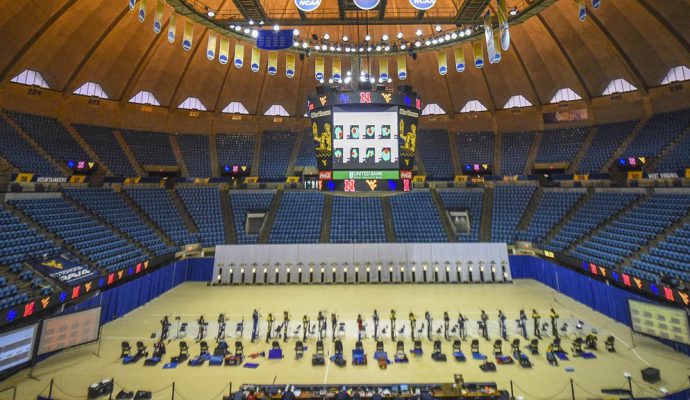 COLORADO SPRINGS, Colo. (March 6, 2019) –  The top skeet athletes in the world will be on display starting Wednesday at the Tucson Trap and Skeet Club in Arizona for the second half of USA Shooting’s Shotgun Spring Selection. It’s only a bold claim if it’s not true and since six of last year’s World Championship medalists will be gunning for podium

Country roads are leading this nation’s elite NCAA rifle programs to West Virginia University Coliseum Friday and Saturday for the 2019 NCAA Rifle Championships as 48 competitors get ready to represent their sport and school.

On 19 different occasions, the West Virginia Mountaineers have proven that when it comes to NCAA Rifle titles, Morgantown is consistent home.  Now, hosting the rifle championship for the first time in the illustrious history of the program, WVU will try and defend home turf against plenty of worthy competition.

University of Kentucky is the defending national champion, having ended the five-straight title streak the Mountaineers had going.  The all-female squad of Texas Christian University enters as the No. 1 ranked team. Sprinkle in eight teams and eight other individual competitors with a host site anxious to showcase their love of rifle shooting and there’s more than enough intrigue.

Plenty of USA Shooting Team athletes are also among them including Olympic gold medalist Ginny Thrasher (Springfield, Virginia), who is anxious to end her final collegiate match the same way she came in – as a champion.  Both the air and smallbore NCAA champion her freshman year just prior to her Olympic gold-medal run, she was recently named the Great America Rifle Conference (GARC) Shooter of the Year and Outstanding Senior.  A nine-time All-American, Thrasher’s aggregate season average of 1178.909 ranks No. 2 nationally. She also ranks No. 4 nationally in air rifle (594.364) and smallbore (584.545).

“I’m really proud to be an athlete at WVU and to have worn the Gold and Blue for the last four years,” Thrasher said recently. “It’s something I will always look back at and remember as an amazing experience. I remember my freshman year and experiencing my first NCAA Qualifying Match. It’s always our Senior Day, and I remember thinking, ‘I never want to leave.’ It’s here now, and I’m really happy I have had the last four years and that I can continue shooting after graduation.”

Thrasher’s teammate and National Junior Team member Morgan Phillips (SalIsbury, Maryland) is the defending two-time NCAA Smallbore (.22 caliber) Rifle Champion.  She’s battled a hip injury for a good portion of the year and will have to overcome that as well as a talented smallbore field in order to earn a third individual crown. She ranks second coming in with a 586.0 season average. The only individual to ever win three-straight NCAA titles in either rifle discipline is three-time Olympic medalist Matt Emmons (Browns Mills, New Jersey), when he won three straight smallbore titles at Alaska Fairbanks from 2001-2003.

Parity among the teams competing this weekend is high according to WVU head coach Jon Hammond.

“This is one of the more competitive fields we’ve had in a long time,” Hammond said. “No team has jumped out and been dominant this season. We know it’s going to be very competitive, and that’s where the extra planning and preparation will be important. There isn’t a favorite this season – each team can approach the weekend with the same expectations and aspirations. I think it’s going to be exciting for spectators, and we’re going to need to do our best.”

That competitive anticipation and the shooting star power will be greeted by what may very well be an NCAA championship record crowd as Mountaineer country prepares for an event year’s in the making.

“This is going to be a pretty unique event for Mountaineer fans, and we’re excited to be a part of it,” Nathaniel Zinn, West Virginia’s assistant athletics director for sports marketing, said. “We market special events from time to time and this would qualify as that.”

According to Zinn, more than 500 advance tickets have already been sold for the two-day competition, which is about what a typical NCAA rifle championship event draws over two sessions.  The NCAA hasn’t tracked attendance figures for its rifle championships but it is believed that Alaska Fairbanks once drew more than 1,000 spectators for its two-day event back in 2007.

Besides West Virginia, four of the other seven teams competing this weekend are within driving distance– defending national champion Kentucky, Army, Navy and Murray State.

Making the NCAA Championships in Morgantown a possibility is the new mobile rifle range purchased a few years ago through the generous donation made by former West Virginia placekicker Bill McKenzie.

The smallbore competition will be held Friday, with the call to line for the first relay set for 9:30 a.m. The second relay’s call to line will follow at 12:15 p.m., and a smallbore final will begin at 3 p.m.

Switzerland product, Barbara Schlapfer of Murray State, ranks No. 1 with a 587.417 smallbore average and a season high of 591 shot November 11 at Ohio State. Phillips is second and also shot a 591 during the season, November 10 at TCU.

Kentucky’s freshman standout, Shaner, ranks No. 1 with a 596.364 average.  Thrasher, Lutz, Schlapfer and Garner each own the highest Air Rifle score on the season having shot 599 with Garner doing so twice on back-to-back weeks back in September.