You are here: Home / Features / More Airguns Than You Can Shake a Stick At 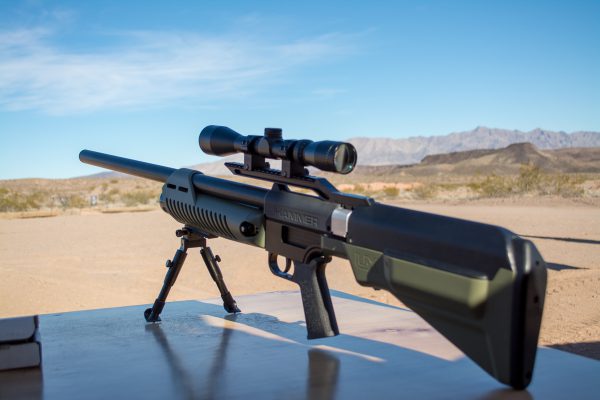 Well here we are – the second issue of the Airgun Wire. As they say in my neck of the woods, now we’re cookin’ with gas! We couldn’t have launched at a better time because we just got back from the land of airgun sensory overload.

What was it? Let’s try a quiz. I’ll provide some hints and you come up with the correct answer to win the Final Jeopardy round. Don’t get too excited, the grand prize is only bragging rights… Know what it is? If not, this annual boondoggle is called the Shooting, Hunting, and Outdoors Trade (SHOT) Show. Sponsored by the National Shooting Sports Foundation, it’s where the entire industry goes to do business. It’s not open to the public, just retailers, wholesalers, law enforcement agencies, and military teams from around the world. It’s also open to media members (like us) who are supposed to report on all the industry happenings while ogling the wares.

There was no shortage of exciting new products in the airgun world and we’ll be covering many of them in depth in future issues. For now, here are just a couple of highlights from the 2018 SHOT Show.

To warm up for four straight days indoors under the same roof, media attendees headed to a pre-show range outing to try new guns. The folks from Umarex lugged a couple of commercial air cylinders to charge their newest product a couple of thousand times for enthusiastic shooters. The Umarex Hammer is a .50 caliber air beast. While we flung 330-grain lead projectiles downrange at 875 feet per second at steel targets, the Hammer can handle up to 550-grainers at 760 feet per second. That delivers a whopping 705 foot-pounds of energy. On the light end, the Hammer can toss a 180-grain projectile at 1,100 feet per second. The Hammer was surprisingly quiet and while the rifle moved during recoil, the sensation was not at all unpleasant. The Sig Sauer ASP20 is available with a synthetic stock but we might have trouble turning down the wood option.

Sig Sauer offers the new ASP20 Break Barrel Rifle with either a synthetic of solid wood stock, but that’s not the news. Sure, the rifle is solid and well-built. It looks nice. But the real surprise becomes evident when you press the trigger. Wow. The two-stage match trigger is adjustable from 2.5 to four pounds but it’s the crisp sensation that will get your attention. The company has also dramatically reduced the cocking force and done some nifty engineering to achieve better and more consistent barrel lockup. We’ll be taking an in-depth look in a future issue of the Airgun Wire. For now, you can read the details in the press release below in this issue.

Like presidential elections, we’re required to start obsessing about the Olympics two years before they’re scheduled to start. That’s right, in exactly 904 days, hundred of athletes will carry their flags into the opening ceremonies of the 2020 Olympic Games in Tokyo Japan. That means that USA Shooting is on the job right now helping our 10-meter rifle and pistol airgun shooters hone their skills.

While at SHOT, we had the opportunity to meet with Keith Enlow, Chief Executive Officer, and Kevin Neuendorf, Director of Media and Public Relations. Within a few short minutes, we quickly figured out that we’re going to be working together – a lot. Over the coming months expect to meet our Olympic Airgun athletes, learn more about the sports, and get some grade-A shooting tips along the way. While we’re on the topic, how about joining USA Shooting to help the cause? Yes, this DayState Red Wolf Special Edition was a looker.

Walking by the Airguns of Arizona booth, I stopped in my tracks when I saw the special edition Daystate Red Wolf PCP rifle. It’s computer regulated for shot-to-shot consistency and that same functionality lets you tweak power output parameters to your preference. Not only is it a sophisticated piece of gear, I think it took the prize for looker of SHOT Show. It’ll set you back about three thousand but look at the bright side – ammo is cheap.

The Benjamin Traveler Compressor from Crosman Portability isn’t the only goal of the Benjamin Traveler. It’s about half the cost of larger compressors.

At an offsite event hosted by the Crosman team, we checked out the Benjamin Traveler Compressor. As you might guess by the name it’s compact and portable yet still delivers 4,500 psi. Included clamps allow you to run it from your car or ATV battery, so if you can drive there, you can fill there. The Traveler also comes with an AC converter, so you can be conventional and plug it into a wall. Portability wasn’t the only goal. The Crosman folks want to make compressors, and therefore PCP guns, more accessible, so the price on this guy is about half that of a traditional compressor.

SHOT Show is far too big to see and there are certainly more new air products than we can cover right now. Don’t worry. We got the pictures. We got the data. We got promises for demo units. We’ll be reporting on more in the coming issues.