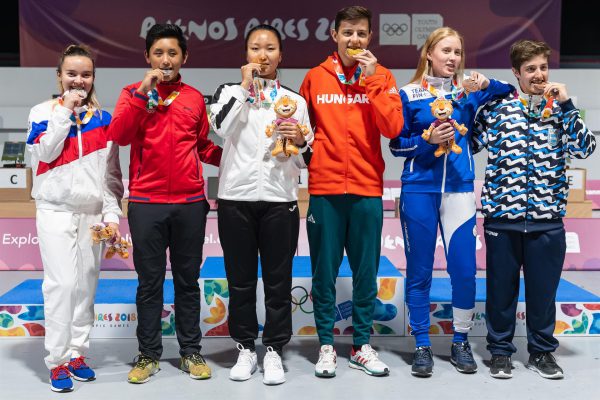 Buenos Aires (ARG), 11 October 2018 – Shooters of six different countries brought their flags atop the podium at the Buenos Aires 2018 Youth Olympic Games, where the first of two shooting sport mixed-international-team events finished with the narrowest margin of victory.

Mongolia’s Enkhmaa Erdenechuluun and Hungary’s Zalan Pekler bested the other team — featuring Russian Federation’s Anastasiia Dereviagina and Mexico’s Edson Ismael Ramirez Ramos — with the score of 10 points to 9, after spending most of the match chasing their opponents.

“It’s an amazing feeling for me,” said Pekler. “I was a little disappointed about my individual match, as I missed the final only by 0.2 points, so when I met Enkhmaa I was really happy she was my teammate. I was quite confident that we could win a medal, and in the end we did it!”

“He was so good!” added Erdenechuluun. “When I met Zalan he told me to relax and try to have fun, so I just tried to stay calm and enjoy the match. I’m really happy, I can’t describe it!”

In the bronze medal match, which took place moments before the gold one, Argentina’s Facundo Firmapaz and Finland’s Natalia Kemppi signed a 10-points-to-7 victory against Gabriela Fernanda Martinez Lopez and Austria’s Stefan Wadlegger.

“The crowd, the support, it was spectacular!” said the Argentinian shooter, originally from Mendoza. “I really hope this medal will help shooting sport develop in our country, we need people to know the sport, to be recognized.”

“He had the whole crowd supporting him, but I also had a good number of Finnish fans!” said Kemppi. “We didn’t know each other before Wednesday, and to be on the podium here at the Youth Olympic Games is fantastic.”

In the two semifinals, Erdenechuluun and Pekler won against Firmapaz and Kemppi with the score of 10 points to 5, while Dereviagina and Ramirez Ramos prevailed over Martinez Lopez and Wadlegger by 10 to 8.

Shooting sport at the Buenos Aires 2018 Youth Olympic Games will award its last title tomorrow, in the 10m Air Pistol Mixed International Team event: the final is going to take place at 11:00 am (UTC-3:00).