You are here: Home / Industry / MidwayUSA Foundation’s 2022 Hometown Challenge Was a Success! 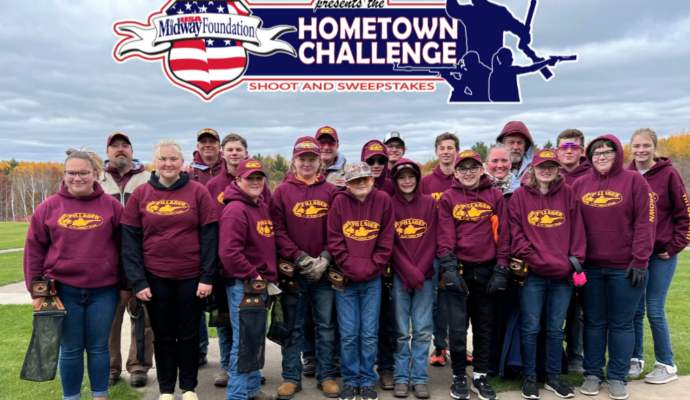 MidwayUSA Foundation Youth Shooting Team Endowments received $289,899 in donations in September! The Foundation’s annual shoot and sweepstakes, Hometown Challenge (HTC), significantly contributed to generating these funds. The event, on its own, raised about $210,000 for youth shooting programs and awarded over 100 prizes. Additionally, funds raised in September were matched through MidwayUSA Foundation’s current Matching Program. September donations were matched at a $0.68 per dollar ratio, so a total of $489,899 was contributed to youth shooting teams in September!

Hometown Challenge is an annual month-long shoot and sweepstakes event that allows the entire shooting community to compete on a national stage right from their hometown range. Shooting categories included international air rifle, international air pistol, trap, skeet, 3-position smallbore, SASP rimfire pistol, SASP rimfire rifle, and more! Over 400 athletes entered scores, and all shooting registrants gained entry into the multi-prize sweepstakes for a chance to win! Entering a score wasn’t mandatory; donors that contributed to their favorite youth shooting program in September were also entered into the sweepstakes. Every entry doubled as a donation to the MidwayUSA Foundation endowment of the participant’s choice and was matched! Sweepstakes prizes included firearms, optics, ammunition, gear, and more!

New to this year, the annual online shoot and sweepstakes event also had a team incentive that rewarded youth shooting teams for participating. The top five fundraising teams were awarded endowment funds, and twelve participating teams were drawn randomly to win $1,000 each. The first-place team, Pillager Clay Target Team, raised $19,405 in September, which was matched, and won an additional $8,000 for being the top fundraising team! This youth shooting team from Pillager, Minnesota, raised funds by hosting an HTC fundraiser at their local range and working with community members. Pillager’s success in September resulted in the team adding over $41,000 to their endowment in one month!

Pillager’s Coach, Heather Grell, had this to say about her team’s recent endowment growth, “As a coach, it is so exciting to be part of this! Not only do our current athletes benefit, but the effort we put into growing our endowment leaves a legacy for generations of athletes to come. It’s a wonderful feeling to know that future teams will have such fabulous resources and can continue to welcome athletes into the shooting sports!”