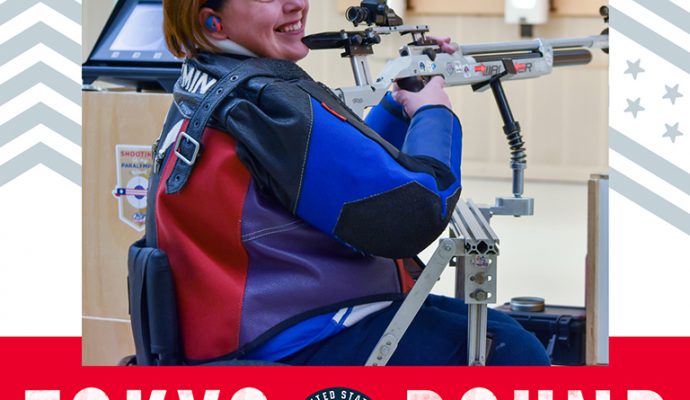 “I think we have really nice diversity on the team with rifle and pistol athletes, members of the U.S. Army Marksmanship Unit, World Class Athlete Program, a returning bronze Paralympic medalist, and a mix of young and more seasoned athletes,” said Don Stith, USA Shooting National Paralympic Manager. “The beautiful thing is how they performed most recently in Lima, Peru at the World Cup. There was a hope that they would pick up at least one quota, and they picked up two thanks to Kevin Nguyen and Jaz Almlie-Ryan, not to mention Xiao, our pistol athlete, who triple medaled at the World Cup. Everyone is on top of their game and prepared mentally and physically. We’re well-rounded and ready to shoot for excellence in Tokyo.”

All nominations are subject to U.S. Olympic & Paralympic Committee approval. When McKenna Geer was 5 years old, she started attending Camp Access, a camp for kids with disabilities that introduced the kids to the outdoors, and instilled the idea that anything was possible for them. At 12 years old, she had the opportunity to shoot at a camp activity where the director, Ernie Butler, took notice and invited her to shoot an NRA sectional match later that spring. Her parents and grandparents were extremely supportive, and she competed in her first NRA National competition shortly after. McKenna’s scores from NRA Junior Nationals put her on the radar of the Paralympic National Coach at the time, and just a year and a half after that shooting activity at Camp Access, she was invited to her first Paralympic Camp at the United States Olympic and Paralympic Training Center.

A week after graduating high school, McKenna became a full-time resident athlete at the OPTC. In 2016, she won a bronze medal in the R5 event at the Rio Paralympic Games, becoming the first U.S. female Paralympic athlete to win a Paralympic medal in the sport of shooting, and the fifth Paralympic medal for USA Shooting overall.
McKenna continues to train at the OPTC and works as an athlete on the guest experience team at the Olympic and Paralympic Museum in downtown Colorado Springs. She’s completed her Bachelor’s in Business and Masters for Business Administration through DeVry University. Tokyo 2020 will be McKenna’s second Paralympic appearance.

She hopes to use shooting to change the lives of other children with disabilities, just as hers was changed by her mentors at Camp Access. McKenna hopes to become a mentor that the next generation of kids can look up to and show them all that life has to offer. Taylor Farmer had never fired a gun before joining her father at the range to shoot her first pistol in 2012. She then took up pistol shooting at her local gun club where she says she would not leave until she shot all 500 rounds out of the box. Three years later, she picked up air rifle and soon began competing. Through this journey, she met Greg Drown, a former standout and captain of the Ohio State University Rifle Team who was diagnosed with multiple sclerosis later in life and began competing in para shooting sports from a wheelchair. In 2017, just a year after graduating high school, Taylor was named to the National Team and in 2018, she moved to Colorado Springs to train at the Olympic and Paralympic Training Center as a resident athlete. That same year, she was named the USA Shooting Paralympic Athlete of the Year.
Taylor won a U.S. quota with her 2nd place finish at the World Championships in 2019 and Tokyo 2020 will be her first Paralympic Games experience. Jazmin “Jaz” Almlie-Ryan has been affiliated with the USA Shooting Team and Team USA for over 10 years, starting with her first training camp in 2011 and officially named to the National Team in 2013. Jaz has won two Paralympic quotas for Team USA, the first in 2016 and again in 2020.

She was introduced to shooting sports at an event called Metal and Muscle Expo in Houston, Texas where various sports are featured all at once. Jaz was there to play in a wheelchair basketball tournament when her last game was cancelled. With nothing on her agenda that afternoon, Jaz entered in the air rifle competition that was going on at the same time and won! From there, she was invited to the Olympic and Paralympic Training Center for a novice training camp, and as she says, the rest is history.
Jaz enjoys playing different adaptive sports like wheelchair rugby and is known to clock over 10 miles a day speed pushing around her neighborhood. When not training, Jaz enjoys spending time at home with her husband Matthew and daughter, Rebekah.

Tokyo 2020 will be Jaz’s second Paralympic Games appearance, and she’s looking forward to representing her country once again on the Paralympic stage. John Wayne Joss III (John) is a member of the U.S. Army World Class Athlete Program and the current National record holder in the R6- Mixed 50m Free Rifle Prone SH1. John got his start in shooting sports growing up hunting and being outdoors in Texas as part of his daily life. In 2018, John won a silver medal at World Shooting Para Sport World Cup in France and won the first Tokyo 2020 Paralympic quota spot for the United States, which he went on to fulfill. Tokyo 2020 will be John’s second Paralympic Games appearance. Only three months into his tour, Nguyen was struck by a pressure plated IED while on dismounted foot patrol. After being medevac out of Afghanistan, he spent the next two years recovering at the San Diego Naval Medical Hospital. Up on his feet 3 months after selective amputation, Kevin fought to stay in the Army, passing rigorous physical fitness tests, weapons qualifications, and field training exercises. Kevin was recommended to the U.S. Army Marksmanship Unit in 2014 and a month later attended a small camp at the Olympic and Paralympic Training Center in Colorado Springs. His shooting career officially began in 2015 where he was given the skills and tools to succeed.

In March 2017, Kevin was assigned to the World Class Athlete Program (WCAP) and continues to train and shoot alongside his teammates at the U.S. Army Marksmanship Unit. Kevin spent the last six years training and competing, and Tokyo 2020 will be his Paralympic Games debut. Xiao began shooting at an early age as a hobby. Around 2012, Xiao began formally practicing with the Bridge Jr. Team under coach In Kim. In 2017, while focusing on rehab and therapy, Xiao practiced shooting as a fun way to focus his mind and pass the time between treatments.

He attended his first international match, the World Shooting Para Sport Championships, in 2019 where he fired an impressive 564 qualification score in the P3 – Mixed 25m Sport Pistol SH1 event that advanced him into the final top eight. In doing so, Xiao earned the United States their first pistol quota spot for the Tokyo 2020 Paralympic Games. He credits this match as the moment where all his training and time spent in the sport registered and the Paralympic Games seemed like an attainable goal. Not long after this match, Xiao moved to the Olympic and Paralympic Training Center to practice full-time as a resident athlete. Tokyo 2020 will be Xiao’s first Paralympic Games appearance.