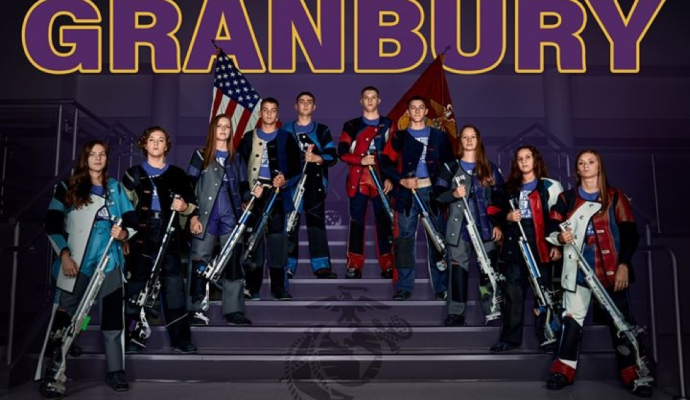 Granbury MCJROTC came into the tournament as the number one seed. After an undefeated regular season, they defeated Piedra Vista AJROTC and Ria Saldo Sportsman’s Club on their way to a matchup against Georgia Competitive Shooters in the finals. They finished the postseason unbeaten with a 2346 to 2338 close victory. This could be considered a revenge game, as Georgia Competitive Shooters have knocked Granbury MCJROTC out of the playoffs twice in the previous three seasons. In the title game Granbury MCJROTC was led by, Makenize Sheffield who shot a 592. The remaining contributing members were Philip Becker, Allison Henry, Clarissa Layland, and Elizabeth Plecity. Granbury MCJROTC is from Granbury, TX, and is coached by LtCol Scott Casey.

Seventh seeded Nation Ford MCJROTC’s path to the title of Sporter champion was very impressive, as they were considered the underdog in each of their three matches. In the first two rounds, Nation Ford MCJROTC won against two undefeated teams from the regular season in second seeded Gulfport MCJROTC and third seeded Lebanon AJROTC. They rounded out their impressive run with a 2212-2194 victory against Pueblo County AJROTC. Sarah Leininger, Deonte Hayes, Kayla Kalenza, and Nick Noto competed for the Fort Mill, SC, based team. They are coached by Sean Mulcahy.

Cross Creek NJROTC rounded out the list of championship winners, after an impressive win over North Brunswick AJROTC. In the title game Cross Creek NJROTC was led by, Melvin Scott Pell who shot a 547. The remaining contributing members were Marvin Alexander Pell, Patrick Johnson, JinYee Ortiz, and Kirsten Sullivan. Cross Creek NJROTC is from Augusta, GA, and is coached by Jonathan Shaw.

Sarah Leninger of Nation Ford MCJROTC and Allison Henry of Granbury MCJROTC have been named the Most Valuable Players in the National Air Rifle League.

Sarah Leninger competed in the Sporter tournament with Nation Ford MCJROTC. She led her team in all three tournament games, shooting a 551, a 565, and 560 in consecutive weeks.

Allison Henry of Granbury MCJROTC is the Most Valuable Player in the Precision tournament. She lead Granbury in both the quarter-final and semi-final games versus Peidra Vista AJROTC and Rio Salado Sportsman’s Club respectively. She was third on the team in the championship game.

The MVP is defined as the athlete from the team that wins the championship tournament who has the highest average score throughout the tournament, and who participated in all three tournament games.Congratulations to both of these young athletes! Henry and Leninger will both be receiving a MVP plaque for their postseason efforts.

If you would like more information about the National Air Rifle League please contact Daniel Schekorra at daniel@shooterstech.net or by phone +1 703.596.0099.