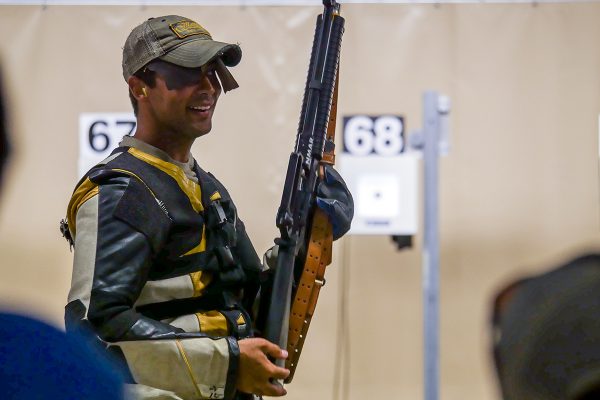 Winning this year’s AiR 15 Challenge during the National Matches Air Gun series of events was SPC Daniel Lowe, 25, of the U.S. Army Reserve team. The match was fired on August 4 at the Gary Anderson CMP Competition Center, located at the Camp Perry National Guard Training Facility.

During the Challenge, competitors fire in a 20 Shot Match using AiR-15 lead pellet air guns that mirror the look of highpower service rifles. The Top 20 then compete in a shoulder-to-shoulder Shoot Off, with the overall winner of the event determined through an elimination challenge. Bench League Matches, where competitors fire off of a fixed position, were also held during the National Matches.

Lowe is no stranger to the air gun range. A past champion and medalist at the national level in air rifle, he qualified for the 2016 U.S. Summer Olympic team after finishing in second place in the qualifying match, held at Camp Perry.

“I walk through those doors (to the Camp Perry air range), and immediately, goosebumps,” he said with a smile. “My heart rate goes up, I get a little excited – ‘Hey, I remember this place!’” The National Matches offers a variety of challenging and fun air gun events for both air rifle and air pistol.

Lowe said he even secured his AiR Challenge win on the firing point directly across from where he established his place on the men’s 10-meter and 50-meter air rifle Olympic teams two years earlier.

He’s taken a break from air rifle competition since December 2016, focusing more on service rifle as a member of the U.S. Army Marksmanship Unit team, then moving to the Reserve team in January 2018. During the 2018 National Matches highpower events, Lowe was a member of the overall winning team in the famous “Rattle Battle,” National Infantry Trophy Team event. Competitors of all ages and skill levels are welcome to come into the air range at any time to compete or to simply give the air guns a try.

Though no longer in training for air rifle, Lowe says the years he put in for the discipline in the past ultimately prepared him for any marksmanship competition he enters.

“The fundamentals are all there,” he said. “All of those many, many hours of hard work kind of shined through.”

Since leaving active duty, he’s been busy adjusting to civilian life and starting his own business in Washington – a coaching company for air gun and smallbore shooters in the Pacific Northwest area of the country. In the future, he’s also hoping to keep working towards earning a spot onto the podium in the highpower realm. The Top 6 competitors in the AiR 15 Challenge earned cash prizes.

A Top Center Shot was awarded during the 30 Shot Pistol Match to the competitor who fired the closest shot to center. This year’s winner was Paul Lalancette, 57, of Attleboro, MA. For his win, Paul received a monetary prize of $197.00 from the CMP, based on the number of entries. The next seven closest competitors also received money for their efforts.

A series of Bench League rifle matches, fired from a fixed position, were also held during the month. Rodney Snyder, 62, of Fremont, OH, placed first in the 30 Shot AR-15 match, as Miki Marciniak, 61, of Macomb, MI, fired the overall score in the 30 Shot Sporter event for the second consecutive year. Gavin Barnick, 15, of Mora, MN, took home the win in the precision 30 Shot Bench Match.

Photos of all of the National Matches events can be found on the CMP Zenfolio page: https://cmp1.zenfolio.com/f817385512.

The Gary Anderson CMP Competition Center located at Camp Perry (Port Clinton, OH) is open to the public on Tuesday and Thursday evenings, 5-8:00pm. Certified instructors and rental rifles are available for visitors.