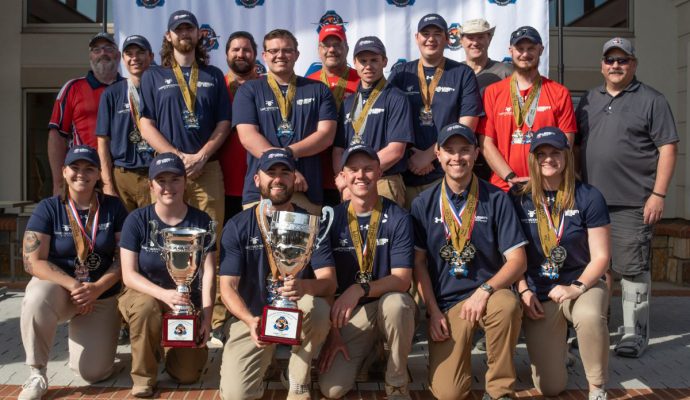 Through the course of the match, college athletes at the CMP Marksmanship Park collectively fired well over 21,000 rounds. Balancing speed and accuracy, each athlete’s goal is to complete the SASP standardized stages of steel plate arrays, with a designated stop plate to record their time. With five “strings of fire”, the athlete’s slowest attempt is tossed out and their fastest four strings of fire are added together to determine a total stage time. With squads of four athletes, these total stage times are complied to determine an aggregate time to determine who will be returning home as SASP Collegiate National Champions.

Despite a challenging year for travel and ammo for shooting sports athletes, teams made adjustments to train for and compete at the 2021 SASP Collegiate National Championship. Returning to the match as the 2020 Rifle Cup Champion, Liberty University was eager to repeat their performance and prove that their SASP Nationals debut was not a fluke. With nine squads of athletes, Liberty came ready to claim gold in as many disciplines as they could, but one clear goal was established not long after returning from last year’s National Championship: in 2021, come back to Virginia with both trophies. Each year the traveling Daniel Hodne Pistol Cup honors the top collegiate team in the Centerfire Pistol discipline. For five consecutive years, Texas A&M’s Corps Of Cadets Marksmanship Unit has held possession of the trophy and was hopeful to keep the trophy for the sixth year in a row. The pressure was high and Liberty University was keen to defend their traveling trophy and acquire another.

With two competitive squads defending their title, the Tammy Mowry Rifle Cup remained at home in Virginia with Liberty University’s clear victory in the Rimfire Rifle Iron Sight discipline. After a close race throughout Saturday’s match schedule, Liberty University’s consistency in the Centerfire discipline gave them 3.45-second lead ahead of Texas A&M, becoming the first college action shooting team in SASP history to hold both championship trophies at the same time.

With SASP’s recent addition of 10 Meter Air Rifle, 10 Meter Air Pistol and Sport Pistol disciplines, teams at the 2021 Collegiate National Championship had the opportunity to experience 10M Air Pistol with a popup three-lane air range. Recognizing that SASP is the Official Youth Feeder Program for USA Shooting, teams traditionally focused on action shooting have begun to expand their program to the international disciplines. Following their experience at National’s popup range, Liberty University is discussing creating an international air pistol team.

The SASP Collegiate National Championship will return to the CMP Marksmanship Park in 2022, planning for a three-day event over the weekend of March 11-13th, where Liberty University will defend this season’s two-trophy performance.

The Scholastic Shooting Sports Foundation (SSSF) is 501(c)(3) public charity responsible for all aspects of the Scholastic Action Shooting Program (SASP) and Scholastic Clay Target Program (SCTP) and Sacross the United States. The SASP and SCTP are youth development programs in which adult coaches and other volunteers use shooting sports to teach and to demonstrate sportsmanship, responsibility, honesty, ethics, integrity, teamwork, and other positive life skills.

The mission of the SSSF is to provide and enhance personal growth and development opportunities for student athlete members; become the premier authority in all things pertaining to firearm-related pursuits for youth; pass on to future generations the legacy of lifelong, safe, responsible enjoyment of the shooting sports. This includes serving as a feeder/pipeline for organized, sanctioned shooting organizations and teams.