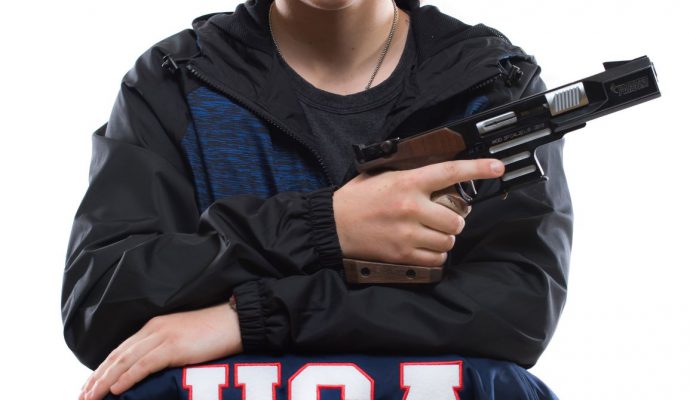 The 16-year-old Leverett (Bainbridge, Georgia) upheld the family name in the absence of her two older brothers as she’s using this event to shine the spotlight on her and her rising pistol skills. Abbie earned the overall championship in Women’s Sport Pistol, by a margin of 23 points and is an overall Junior Olympic champion for the first time after finishing third in this event last year. Her brothers Jack and Henry are in Beijing representing Team USA at the International Shooting Sports Federation (ISSF) World Cup.  A Leverett has now claimed gold at the NJOSC for five straight years now, and Abbie adds to an impressive medal haul of 17 top division medals during that stretch, including now eight victories. Finishing second was Sarah Choe (Los Angeles, California) followed by Ada Korkhin (Brookline, Massachusetts), who rebounded nicely after a rough 536 Qualification score Sunday. She shot 27 points higher Monday and beat Leverett in the Final.

The 14-year-old Kang (Los Angeles, California) etched out a two-point win in Men’s Air Pistol, doing so on the strength of being the only competitor to shoot Qualification scores in the 560s with a 560 and 561 and then winning today’s Finals match. He was the J3 champion for the previous three years in this event.  Finishing second was The Ohio State University product Samuel Gens (Andover, Massachusetts) with Kyler Swisher (Jonestown, Pennsylvania) earning the bronze medal.

Paralympic athletes are making their second appearance at the NJOSC and it was Champion (Greenville, Texas) becoming champion in the SH2 Mixed Standing Air Rifle event featuring seven competitors. As the only J1 (age 18-20) entered, she earned a 19.7-point margin of victory against the young field.  Gracie Hoyt (Mullen, Nebraska) finished second followed by Moira Antal (Bealeton, Virginia) in third.