You are here: Home / Competition / Leininger, Fraser Top the Podium at the 2019 CMP Three-Position Sporter Nationals 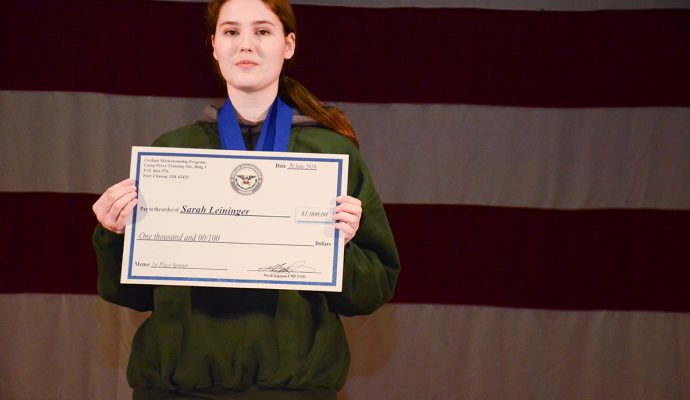 CAMP PERRY, Ohio – Sarah Leininger, 18, of Nation Ford Marine Corps JROTC in South Carolina, claimed the overall win in the Civilian Marksmanship Program’s (CMP) National Three-Position Air Rifle Championship – fired June 29 at the Gary Anderson CMP Competition Center in Ohio. Leininger gave a remarkable Finals performance during the event that allowed her to soar above her competition, etching a score of 660.3 to secure the championship title by more than 10 points.

Leininger entered the Finals competition of the day, which follows the qualification round, in second place behind Jaden-Ann Fraser, 17, of Volunteer High School in Tennessee, who won the 2019 National Junior Olympic event the day before and the National JROTC Championship back in March. Leininger stayed calm in the Final, firing a score of 97.3 with five shots in the 10-ring to rise to the top spot and grab the overall win.

“Usually before a match, I’m relaxed and calm, but for some reason I was nervous for this one,” she said.

But as she became more comfortable in her position and got her footing down, the nerves melted away. Her mind was filled with the breathing exercises and other techniques she’s learned during her training. Although she admits her hands were shaking with every trigger pull, she stayed confident enough to capture the championship title.

A graduated senior, Leininger will be joining a pre-dental program and plans to move on to dental school in the hopes of one day becoming a dentist. She would also still like to participate in marksmanship as a hobby.

Leininger and Kalenza combined scores with fellow teammates Nick Noto and Deonte Hayes to achieve an overall score of 2229-76x for the team championship title for the second consecutive year. Fraser’s Volunteer High School followed in second with a score of 2197-84x, as Des Moines North Marine Corps JROTC Gold trailed only by x-count for the third place position, with a score of 2197-77x.

The National Air Rifle Championship is a three-position event, where sporter and precision competitors fire two days of competition – the Junior Olympic Nationals, followed by the CMP Nationals. Competitors fire qualifying scores each day, with the Top 8 competing in a final on the line to determine winners. The top male and female competitor over the two days also receive places on the USA Shooting junior team.

“I’ve had a crazy, wonderful year,” she said.

Fraser, who wishes to continue her marksmanship career into the future after she graduates, will be returning to her Volunteer High School team next year as a precision competitor – broadening her abilities as an athlete.

“Every year I seem to struggle with the CMP match, so hopefully next year I’m going to do better with that. That’s my goal,” she said as she laughed. “I just want to explore new things, hopefully precision will be fun, and I’m just hoping for the best.”

Outside of her own successes, Fraser also recognized the accomplishments of her teammates, remarking at how fulfilled she was to have been able to spend the season with such a motivated group of peers.

“I was really excited to come here with my team because this past year we lost a lot of kids, so it meant a lot to us to compete, and I couldn’t be any more proud that we did so good. I’m just so proud of them,” she said. “We came in, we were determined for a reason, and I feel we accomplished that.”

Coming in second in the Junior Olympic event was Riley Mills, 16, of Canon City High School Army JROTC in Colorado, with a score of 657.7. CMP Nationals winner Sarah Leininger claimed the third place spot only one point behind Mills, with a score of 656.6.

In addition to the thousands of dollars in monetary endowment awards provided to winning teams from MidwayUSA, the CMP provides $1,000 scholarships to the Top 3 highest scoring graduated seniors of the event. Sarah Leininger, Sam Lumbra of Tempe Union High School in Arizona and Kayla Walker of South Panola High School in Mississippi were among this year’s winners.

For a complete list of results of the CMP National Three-Position Championship and the National Junior Olympic Championship, visit https://ct.thecmp.org/app/v1/index.php?do=match&task=edit&tab=results&match=18227&tab=results.

Photos of the event can be viewed and downloaded for free from the CMP Zenfolio page at https://cmp1.zenfolio.com/f960619785.