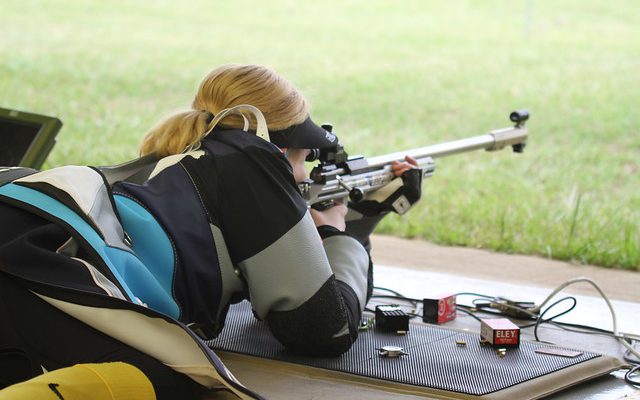 (COLORADO SPRINGS, Colorado – June 29, 2019) – USA Shooting’s Rifle/Pistol Championships came to close Saturday from Fort Benning, Georgia, but not before Alexis Lagan and Ginny Thrasher could add to an already impressive week and Michael McPhail could show off his skills as this nation’s top prone shooter.

Lagan (Boulder City, Nevada) was the only open competitor to earn two national titles in the Olympic disciplines, taking top honors in Air Pistol Wednesday and then following with a Sport Pistol win Saturday. She got there by virtue of a huge score of 584 in Day 2 Qualification, nine points better than Friday’s score, that had her holding a four-point advantage heading into Finals. Her rebound Saturday helped overcome what she described as “sabotaging herself with a costly mistake” after she loaded too many rounds during the Qualification match on Friday, earning her a two-point deduction. She would tie eventual second-place finisher Sandra Uptagrafft (Phenix City, Alabama) in the Final, forcing a shoot-off that Lagan would eventually win, 4-3. Sarah Choe (Bridge Jr./Los Angeles, California) finished third. It was the exact same podium line-up and order in Air Pistol as well.

Choe would also go on to earn a second Junior title on the week after doing so in Air as well. She held a five-point advantage after Qualification on runner-up Katelyn Abelyn (Douglasville, Georgia) and would win the Final to finish ahead her friend by six points. Abbie Leverett (Bainbridge, Georgia) would finish third while Ada Korkhin (Brookline, Massachusetts) was the high J2 (15-17 years old) and Annabell Yi (Diamond Bar, California) was the high J3 (14 years and younger).

At the conclusion of Nationals, the Para Pan American Games Team was identified pending U.S. Olympic and Paralympic Committee (USOPC) approval. A full roster announcement will be made following USOPC approval.  Athletes identified include:

Other highlights on the week, includes a silver medal by Jazmine Almlie-Ryan (Houston, Texas) in the Mixed Prone Rifle event (SH2 R5).

On the men’s side, it was Prone stalwart Michael McPhail (USAMU/Darlington, Wisconsin) coming through with another national title in what has been his signature event before the removal of the discipline from the Olympic program after the 2016 Olympic Games.  He took the 6.7 point win over Dempster Christenson (Sioux Falls, South Dakota) after a strong 630.0 score Saturday, a score 8.1 points higher than his Friday result and 5.2 points higher than anyone else in the field. Meanwhile, McPhail’s USAMU teammate Patrick Sunderman (Farmington, Minnesota) was third, but by just 1/10th of a point over another USAMU soldier-athlete Tim Sherry (Highlands Ranch, Colorado).

PLEASE NOTE:  In the recap release from June 27, we erroneously listed Ginny Thrasher as breaking the national record in Women’s Three-Position Rifle with a score of 1181. However, that is factually inaccurate and reported wrong.  Sarah Beardmaintains the national record of 1185, setting that back at the Winter Selection match in December 2018.  We apologize for any confusion this may have caused.