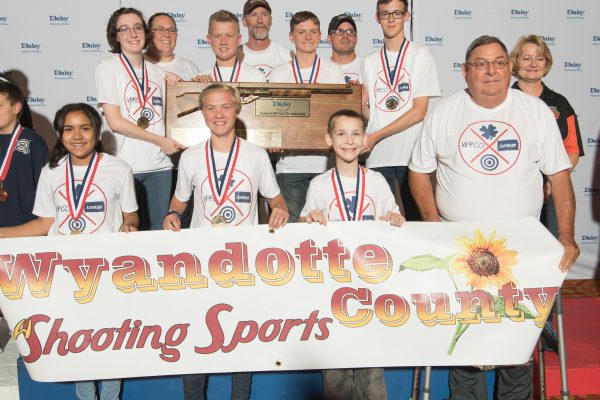 The Daisy National BB Gun Championship Match has been referred to as the Gateway to the Shooting Sports. As Independence Day approaches, teams of young shooters ages 8-15 converge on Rogers, Ark., to compete for Team and Individual National Championships in this 5-meter, 4-position (standing, kneeling, sitting and prone) competition. Now in its 53rd year, the Daisy Nationals is a shooting match focused solely on the youth shooters and features far more than just shooting.

This year, 54 teams from across the nation competed in this event held June 30-July 3. What would prompt a team from Oregon, or Virginia, or South Texas, to travel up to 18 hours to make the Daisy Nationals the focus of the Independence Day holiday?

Tracy Dey is the mother of two Daisy Nationals competitors, and 2018 marked the third year they’d made the trip to Rogers, Ark., all the way from Montana.

“Each time has been a memorable experience for my children,” she said. “My daughter participated twice and my son twice. The years my kids have spent in this program has meant the world to them. Our son became very emotional on his last target because he knew it was his ‘last target,’ as he ages out this year. The experiences they’ve had because of the Daisy Nationals will never be forgotten.” Coaches play a key role, not only in development and preparation, but on match day calling shots.

Most teams are formed within the 4-H Shooting Sports program, but any organization can create a team as long as they follow the curriculum set forth by Daisy and the NRA. To qualify for the Daisy Nationals, the team must place first, second or third in their state’s NRA-sanctioned match.

The Daisy curriculum features hours of classroom gun-safety and education work prior to the youth ever touching a gun. In fact, before the shooting starts at the Daisy Nationals, each competitor must take a test covering gun safety and match rules, and their score on that test makes up 20 percent of their final score. This year 19 competitors made a perfect score on the test.

Coming into this year’s match, the Pierre Junior Shooters (Pierre, S.D.) were looking to three-peat, and as the contest wore on it appeared they would do just that. When the figurative smoke cleared, however, the team out of Kansas City, Kan., the Wyandotte County 4-H, edged them out for the win by a single point.

“We practice together as a team,” said Wyandotte County 4-H team member Garret Dall, a well-seasoned shooter who placed second in the Individual Aggregate division in 2016. “The coaches polish us, call the shots and help us out any way they can.”

“We practice ten months out of the year, three or four nights a week for three hours a night,” she said.

Berger won the Gold by just one-tenth of a point.

In addition to the five regular team members, two alternates can attend to take over should a shooter not be able to compete, and if you shoot as a team member one year, you must shoot in the Champions division the next. After shooting as a Champion, shooters are allowed to again compete as a regular team member. This brings new, fresh youth shooters into the program every year, and these Champions and Alternates compete for National Championships in their own divisions. Tony Stacy, a member of the Walton County out of Monroe, Ga. team, shot eight perfect shots after his perfect 10 to break his own record.

As always, the 53rd annual event featured plenty of fun, action, and emotion beyond the shooting competition. The Barter Bar, in which competitors bring items representing their states (which can include everything from homemade crafts and wildlife-related items to cans of “Potted Possum” meat and sports jerseys) and swap them with other competitors. The costume contest is always a hit.

Other events include a Parade of Champions at the opening ceremonies in which many teams wear costumes or custom T-shirts of their own design. This year, Academy Sports + Outdoors sponsored the costume/theme and T-shirt design side contests and presented the winners with $500 gift cards.

During the Opening Ceremonies, teams parade through the massive ballroom, their names are announced, and they take the stage for photographs. It’s as festive a moment as many of the youth shooters have ever experienced and supports Daisy’s position to make this event a highlight of the year for these kids. Their hard work, focus, and determination are rewarded.

The Match also includes a Painted Gun contest. Each competitor must shoot the Daisy 499B Champion BB Gun, the most-accurate 5-meter competition BB gun in the world, and may decorate it any way they choose within the parameters set forth by the NRA. Many guns look as sharp as sports cars or follow a particular theme. First, second and third place winners were awarded Academy Sports + Outdoors gift cards for $300, $200 and $100 respectively.

This year, Jayson Kimberly from the Montgomery County Group Therapy team out of Conroe, Texas claimed top honors in the painted gun contest. His BB rifle features a classic image of Red Ryder on a horse with vivid colors and a deep gloss.

Each shooter shoots the Daisy Champion 499B, and it’s is not the Red Ryder that so many of us used when we took our very first shots. It’s a muzzle-loading lever action that shoots ragged holes at 5 meters.

“These extra events, the painted gun contest, and the costumes are what separates the Daisy Nationals from other shooting competitions,” said Daisy Public Relations Director Lawrence Taylor. “Attend the event one time, and you’ll see why this is the premier youth shooting event in the nation. It’s way more than just a shooting competition, as evidenced by teams that have attended every year for more than 20 years.

“It’s a National Championship match with a focus on just the kids and providing an event they can remember fondly for the rest of their lives.”