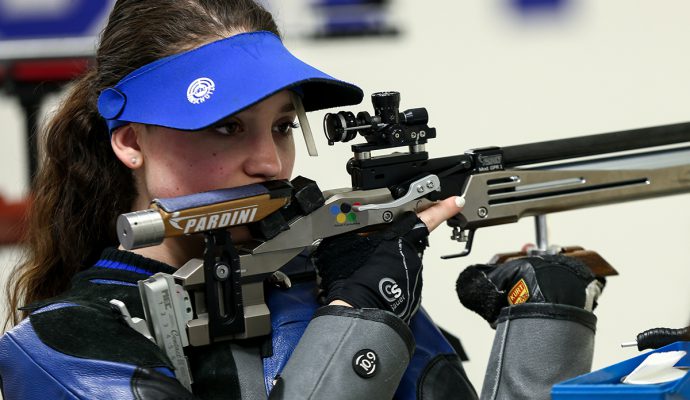 Though 2020 was disruptive to many lives, it turned out to be an exceptional year for the career of Mary Tucker – a talented 19-year-old USA Shooting National Team rifle athlete.

The year capped her freshman season as a collegiate competitor at the University of Kentucky, where she earned numerous awards and titles including Great American Rifle Conference First Team, Rookie Shooter of the Year and the National Rifle Association’s Collegiate All-American and Shooter of the Year.

In early February 2020, Tucker earned a spot on the USA Air Rifle team set to compete at the Tokyo Olympic Games in 2021. The following November, Tucker recorded a perfect score of 600 and fired a NCAA record aggregate score of 1195 in a match against Murray State and Morehead State.

Her perfect score was the first fired nationally for the season and the first recorded in University of Kentucky history.

Tucker was no stranger to the event, placing second overall and earning the top junior spot in 2018 and returning in 2019 to overtake both the Junior and Open titles.

“Going into WAG (Winter Airgun) 2020, I’m not going to lie – I did not have any expectations for myself,” she said, candidly. “All I wanted to do was go in, do my process like I always do, and see how it goes.”

Typically, Tucker puts in extra practice leading up to a big match (with her Pardini GPR1 Evo with Centra Spy rifle), but because of everything going on in her life and around the world, she hadn’t shot for nearly a month before she arrived at Winter Airgun.

“I knew I still wanted to do well, but I didn’t put any pressure on myself,” she admitted. “It went well. I didn’t have a plan and just went with it, so I think I learned how to adapt.”

A local, national and international-level athlete, Tucker is a self-taught markswoman – absorbing skills by training in her family’s garage in Sarasota, Florida, while in high school. She used the internet to give her tips, such as through YouTube videos and other resources, and joined her school’s club team. It was there that she received the harsh criticism that gave her just enough motivation to push harder.

“I was getting a lot of negative comments, telling me I wouldn’t make it,” she explained. “I decided to keep going so I could prove those people wrong and show everyone and myself that anything is possible.”

She found a new team and a new coach who helped her set goals and achieve them – keeping her eye on advancing her career onto bigger stages. After receiving nearly a dozen recruitment emails from college programs, she enrolled as a member of the University of Kentucky NCAA rifle team in 2019, where she is studying equine finance.

In stark contrast to her first experience with the sport, the one thing that Tucker now finds most rewarding about being a part of the rifle community is the support she has found from her fellow athletes.

“We are all competing against each other, but we also all want to see each other succeed,” she said. “On my NCAA team, everyone helps everyone, and we all get better collectively. I think that’s something that is growing in the overall community and will push the U.S. to new heights.”

For 2021, Tucker will maintain her focus on her career. As she wraps up her sophomore year at Kentucky, she hopes to be able to represent her school on the National stage at the NCAA Championship event in March, which was cancelled in 2020 before winners could be determined.

Of course, the core of her mind is set on the international stage as she prepares to compete in her first Olympic games in Tokyo. Her principal goal is to reach and uphold scores that are competitive enough to win against the rest of the world.

“The thing that motivates me the most is knowing that I will never be the best,” she said. “This is a sport that changes all the time, and scores are progressively getting higher and higher internationally. Even if I do win something, there will always be more to work on and someone else who is doing it just that little bit better.”

No matter the outcome in Tokyo, Tucker has certainly achieved the goal she set out to conquer when she started her marksmanship journey – she showed everyone that anything is possible.