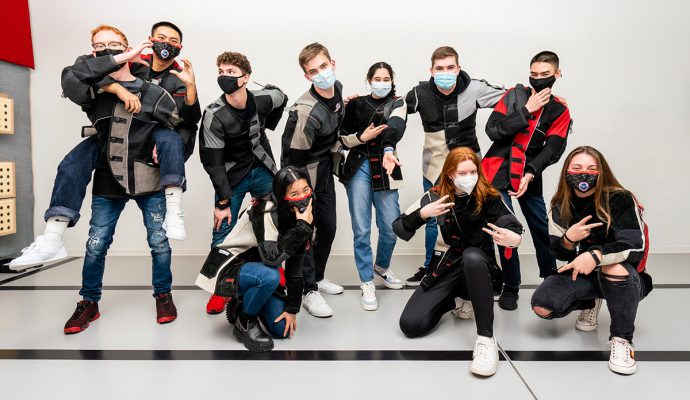 The Kaiserslautern High School rifle team spends its time like most junior teams. Its members focus on the fundamentals and work hard on the firing line to improve their game, in the hopes of achieving victory amongst their peers. But unlike other teams whose rivals are right next door, their competition is a world away – well, more specifically, a country away.

The school, also known as KHS or K-Town, hosts over 700 students and 68 full-time educators. KHS is located within the Europe East – one of three European school districts facilitated by the Department of Defense Education Activity (DODEA) system. A total of 13 schools from Germany, Italy and the United Kingdom compete against each other as part of the DODEA athletic program, which includes Junior Reserve Officer Training Corps (JROTC) scholastic rifle opportunities.

Coach Eric San Pedro, a retired MSgt with the U.S. Air Force, has led the Kaiserslautern rifle team since 2019. Currently, there are 10 total junior athletes on the team, with the top four members named to the school’s nationals team.

“The strength of this team lies in their tenacity and determination to be the best they can be,” San Pedro said. “They love to be in the firing range, practicing intensely. They understand the importance of practice.” This year’s nationals squad is full of flair, with three juniors and a remarkable up-and-coming freshman, Hannah San Pedro – the coach’s daughter. This is her first time on the marksmanship team, and, incredibly, she is already shooting at an elevated competitive level.

“Hopefully, she can continue to improve and prove herself,” San Pedro said as a proud dad/coach.

Of course, Hannah’s not the only K-Town marksman showing talent. She recently joined forces with teammates Jonathan Stricker, Vivian Dougherty and Aiden Malcolm to earn first place overall in the Air Force division of the 2021 JROTC Virtual Championship (this year’s National event). San Pedro, whose team also came out on top during last year’s Air Force JROTC National Championship results, says his athletes are consistently motivated and dedicated to enhancing their skills.

“What I appreciate from this team is their willingness to listen and have a coachable attitude,” he said.

San Pedro went on to say that the biggest challenge of being an overseas school is the limited competitions they are eligible to participate in, since there are no local precision competitions available in Germany.

To find in-person matchups, the team typically competes stateside each year at the JROTC National Championship, VFW events and other U.S.-sponsored matches where they are allowed to compete. The onset of COVID-19 in 2020 struck the KHS team just as it did many teams within the United States – causing them to miss a significant number of competitions and practice on top of an already sparce schedule.

“Living in Germany is no different from the U.S. or any other country. It (COVID) has hit the entire globe in an unprecedented manner,” San Pedro said. “COVID has impacted our marksmanship program in ways where our athletes have lost time to train and slowed down the process of becoming a sharpshooter.”

Luckily, with organizations like the Civilian Marksmanship Program staying dedicated to providing competitive opportunities, the Kaiserslautern team was able to take part in a few matches throughout the year, in spite of the pandemic constraints. Postal competitions, where teams use mailed targets to complete a course of fire at their home ranges and return for scoring, made “gathering” athletes for matches safe and convenient.

“We are grateful that we were allowed to have a short marksmanship season, due to the fact that we can shoot Postals – even though we have to be compliant with COVID safety restrictions and policies, such as wearing the masks and social distancing while shooting,” San Pedro explained.

The Kaiserslautern team has already accomplished one of its biggest goals for this year – a repeat Air Force National Championship title – but there’s still more to be done. With San Pedro behind them, the fierce athletes are ready for whatever challenge is next.

“This year’s K-Town team is underrated and unknown, but they have the hearts of champions,” he added. “Of course, they’ll have to show this in the firing range!”