You are here: Home / Competition / Junior Natalie Perrin Takes On The World and West Virginia University in 2021 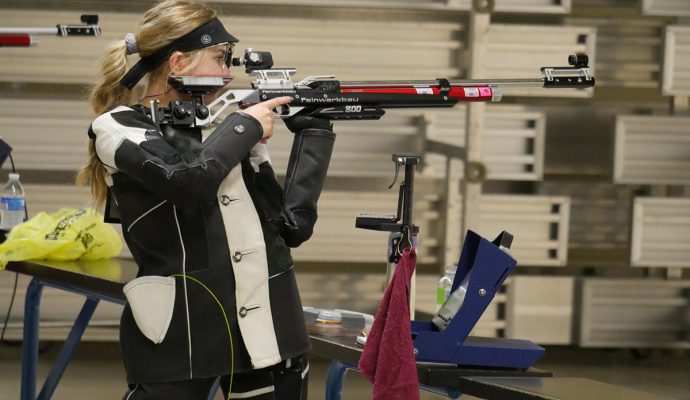 Natalie Perrin, 18, of Coopersville, Michigan, has had one clear aspiration since she first got serious about marksmanship.

“I’ve always wanted to compete in college,” she said.

On her 18th birthday, in November 2020, Perrin reached her goal by signing a National Letter of Intent with West Virginia University (WVU) Rifle – one of the premier collegiate marksmanship programs in the country.

Perrin, a talented junior athlete, received several letters from respected NCAA schools hoping to get her to join their programs. It was a tough choice, but after getting to know the coaching staff and team members of West Virginia, she knew where she wanted to continue her budding rifle career.

“I’m really excited to work with Coach (John) Hammond and Coach (Soren) Butler on a daily basis and to get to train with the team,” she said. “I think it may be challenging at first to juggle rifle and academics, but I know I will have a good support system there for me.”

Along with working with the team, Perrin says she’s ready to experience all aspects of college life, like representing WVU and being a part of its atmosphere. Right now, she thinks the most challenging part will be acclimating to life in Morgantown, where WVU is located, and being away from home for an extended period of time.

But, that’s okay. Perrin has never shied away from a challenge – and she usually comes out on top.

In 2019-2020 alone, Perrin shot the highest air rifle score in the state of Michigan, collected a pair of Junior Olympic gold medals and won the 2020 state smallbore title.

Perrin is also a regular to the Gary Anderson CMP Competition Center at Camp Perry, participating in the annual Monthly Match League. In 2020, she led the 3×20 Precision and 60 Shot Rifle matches in the final League results – staying steady at the top of the leaderboard each month she competed.

Not stopping there, she went on to become the top junior competitor at Camp Perry during the 2020 USA Shooting Winter Airgun Championships, and she completely controlled the junior match during the two-day Dixie Double air gun event at CMP’s South Competition Center in November. She marked her Dixie Double showing as one of her favorite career accomplishments, so far.

“It was just a really fun match and I think one of the firsts that we were able to all get together again and compete at a good size match,” Perrin said. “This match also helped me get on the team to go down and compete in El Salvador, which is another favorite experience of mine.”

The El Salvador Junior Grand Prix in March 2021 was her first time competing internationally. There, she was one of 12 USA juniors who were vying for earned quota spots for the Junior Pan American Games, firing later this year in Cali, Colombia. With nine medals overall, the team earned all of the available quotas.

“It was such an incredible experience and one that I will never forget,” she said. “Everything was so surreal – from wearing the National Team Jacket to actually competing there.”

Although she was nervous, all of the training she had done led her to that moment on an international range, and she knew exactly what to do.

“When I got on the line, I calmed down a little bit because it’s always the same black dot,” she said. “I am so grateful for that experience though, and I learned a lot about myself as an athlete and some good things to work on.”

“It was such an honor to be able to represent the USA,” she added.

She says one thing to remember when competing outside of the country is to trust yourself. Training enough to create muscle memory and allowing the body and subconscious mind to guide the performance can help calm the nerves.

“Of course, I would also say that the first time is always the hardest,” she admitted. “While I’ve only had one international experience so far, I know the next one will hopefully be less nerve-racking and scary.”

Since the beginning of her career, Perrin has remembered to soak in each moment and relish in her experiences.

The sport piqued her interest when she saw it offered at her local county fair in 2015. She started with 4-H BB gun later that year and stayed with the discipline for two years – dabbling in sporter air rifle before moving on to precision air rifle and smallbore through her local gun club, the Grand Rapids Rifle and Pistol Club.

She has since connected with other junior programs, like the Michigan State University Demmer Center Junior Team and Team Winning Solutions – a training opportunity led by former NCAA athlete and Olympian Lucas Kozeniesky. She’s also a member of the USA Shooting Junior Team. Perrin trains with her Feinwerkbau 800 aluminum air rifle and an Anschutz 54.30 smallbore – readying herself for the several firing lines she finds herself on throughout the year.

“I try to compete as much as I can,” she said. “I am a pretty firm believer that some of the best lessons you will learn in the sport is by competing and getting in range time.”

In 2019, she was selected to be a National Rifle Association Youth Shooting Sports Ambassador, which opened her eyes to a new perspective on marksmanship.

“I really just want to share with people all the opportunities possible in the sport and all of the disciplines,” she said. “So many people, like me, didn’t know about everything that is possible in shooting sports, and I want to get more people involved.”

Perrin says she has received helpful advice from many in the shooting community throughout her career. One particular piece of advice that was told her by her Team Winning Solutions coach, Kozeniesky, has stuck with her.

She went on, “Someone also told me, when I first started competing, to make training hard. When you push yourself and work hard in training sessions, matches can begin to feel less intimidating and more familiar.”

Perrin’s next goal is to someday make it to the Olympics. She plans to continue working within the sport after college, specifically with youth involvement and outreach.

“I enjoy any time I get to compete and see all of my fellow competitors and friends,” she said.

Off of the firing line, Natalie has been a member of the Coopersville Future Farmers of America Chapter, where she has proven herself to be a gifted public speaker. She has competed in various public speaking contests, and in 2020, she won the Michigan State FFA Public Speaking Contest with a speech on ovine GM1 Gangliosidosis – an inherited nerve cell disorder in sheep. She also enjoys spending time with her family and traveling. At WVU, she plans to study advertising and public relations.

Good luck to Natalie as she prepares for West Virginia University and her future!