You are here: Home / Features / Junior Caroline Martin Responds to Down Year by Discovering Merit On and Off the Range 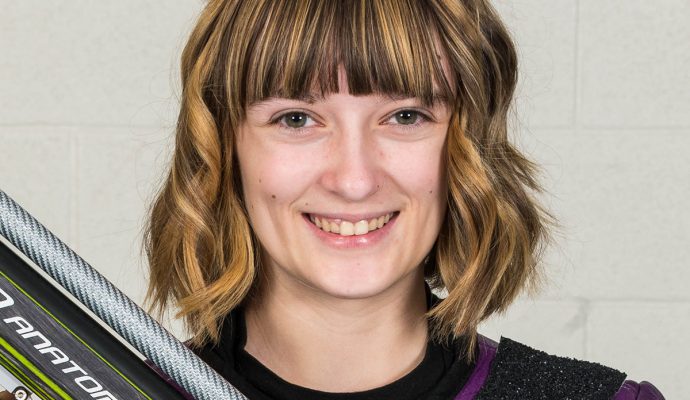 Caroline Martin, 17, of Nemo, Texas, has been a member of the Granbury High School Marine Corps JROTC precision air rifle team since her freshman year. The team is full of talent – recently earning its fifth consecutive JROTC National Three-Position Air Rifle Championship national title in March while producing a number of other team and individual honors.

A junior, Martin was part of the fourth place overall precision team at the event and even finished in seventh place as an individual out of over 80 other cadets from around the country. She’s one of four Granbury team members who will graduate next year, and she’s been working hard to reach a strong finish to her high school career as well as to build a positive foundation into her future.

“I’ve always grown up around marksmanship,” she said. “My dad is an avid competitor in field target competitions, and I was usually right behind him at those competitions.”

Ready to get involved within the sport herself, Martin attended Granbury’s summer rifle camp for three years in a row before becoming a member of the team when she entered high school. Though she had a successful freshman start, her sophomore year put her into an unexpected performance slump. It was a frustrating time for the young athlete.

“It lasted a really long time,” she said. “I wasn’t really sure why I wasn’t performing as well as everybody else – I was doing all of the same things as them and even practicing more.”

“I struggled with that,” she went on. “I obviously wanted to be the best, but my scores didn’t quite measure up to that.”

Though discouraged and her self-confidence fading, she didn’t give up.

Near the end of her sophomore year, Martin’s team qualified for the 2020 JROTC National Three-Position Air Rifle Championships. She competed in the event with a brand new suit and gun and fired two consistent scores.

“After that, it only went up from there,” she said. “I made very steady progression. I practiced all summer, and my 3×20 scores got even better, but I still struggled with separating my worth with score.”

When she began to improve, she started to email college coaches and even heard back from her dream school. The response motivated her to put even more effort toward her skills – attending as many open practices as she could.

“I came back to the drawing board and started working on the basics,” she said. “I found a new position that worked better for me. I had better equipment that adjusted to me better. It was like all of the pieces of the puzzle were coming together.”

That’s not to say she doesn’t still have her ups and downs.

At the 2022 JROTC Service Championships in Chandler, Arizona, she suffered one of her worst performances all year.

“I really thought I had made a fool out of myself,” she admitted.

It wasn’t until a few cadets from a competing rifle program approached her and asked to take a photo with her that she was reminded that she’s more than just her scores.

“I was astonished,” she said. “Isabelle Zantow (of Glynn Academy High School in Georgia) is one of many people that I can accredit to a boost in my self-confidence as well as scores!”

Others who have uplifted Martin are the ones who helped get her into the sport in the first place.

“My parents have been such a huge support system for me since I started shooting,” she said. “They’ve helped me through so many decisions I have had to make, and at least one of them is always at our matches, no matter how busy they are.”

And, of course, she also gives credit to her teammates for her comeback.

“We have this type of camaraderie that is hard to find in a lot of programs,” she continued. “No matter what, I know I can always count on them, and they can count on me. Their support has been never-ending, and I’m very thankful for that.”

The self-assurance, support and extra training paid off. During her junior year, Martin was honored as the Orion National Air Rifle League Most Valuable Player. She earned the highest average on the winning team during the postseason – 614.7.

“I had tons of people whom I don’t even know come up to me and congratulate me on my accomplishment that two years ago I didn’t think I could even accomplish,” she said.

Senior Marine instructor and coach at Granbury, Lt. Col. Scott Casey, has called Martin an “anchor” for the team – praising her determination, even during her time off.

“In practice, I focus A LOT on my process,” Martin said. “I’ve been really working toward just letting score not be a reflection of my process.”

The West Point SLE provides rising high school seniors with a week-long immersion into the academic, military and social life of a cadet. Participants explore West Point from all angles, including high-tech educational facilities, team-building athletic activities and realistic military training. The one-week Naval Summer Seminar allows students to experience first-class academic, athletic and professional training while building lifelong friendships with campers from all over the country.

“Their coaches have been so good to me during this recruiting process, and I am so excited to attend their leadership courses!” she said.

Martin’s not yet ruling out the possibility of a spot on the U.S. Army Marksmanship Unit, maybe after some time at the Naval Academy and U.S. Military Academy at West Point. She’s also considered studying psychology at the University of Akron in Ohio, though she has prospects at many outstanding schools.

“I have a friend, Jakob Rankin, who shot for Granbury and now shoots for Akron. He has been a huge help in getting in contact with the coaches and helping me find a school that’s right for me,” Martin said. “The fact there are great coaches from great programs looking at me as a recruit just astounds me.”

Whatever she decides, Martin will certainly bring with her a willingness to succeed and the grit and poise to lead her there.

“Mostly I’ve just been working on trusting myself,” she said. “I mean, I’ve proven I can accomplish anything I put my mind to.”