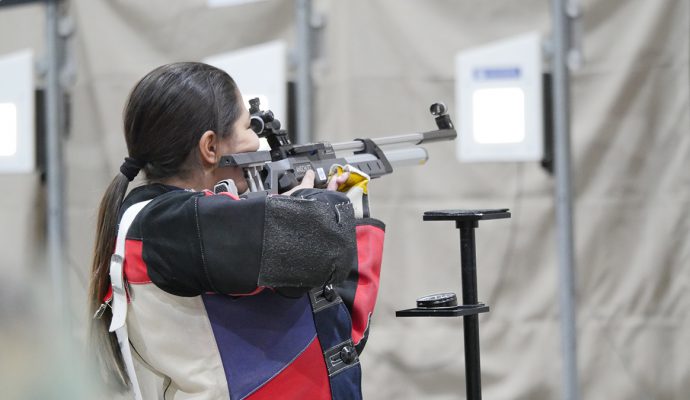 For Ionee, the win came with bittersweet tears. Her strength as a competitor extended from her skills into her character. The gold medal that hung from her neck was both a symbol for all that she has gained through her hard-fought year and also a reminder of all she has lost.

“I always liked guns when I was younger,” she said, speaking of her rifle career.

Ionee is fully committed to the sport, practicing with her team twice a day and staying away from other school activities – entirely dedicating her time to rifle. The love for marksmanship came from her coach, Chief Warrant Officer Mark Bristol, who introduced her to the rifle team.

“It drew me in, and now it’s my passion,” she said with a smile.

Warrant Bristol coached Ionee for two years and during that time taught her skills that she has applied on and off of the firing line.

“I learned a lot of things, like patience, focus, my position, how I can apply rifle to everyday life,” she said. “He’s strict, but goofy. He’s forward, but at the same time he’ll kind of make you laugh in the process. So it was really fun learning from him.”

She has many stories about Warrant Bristol, but one of her favorites was when one of her sporter teammates made it to JROTC Nationals and made a bet with Warrant that if she won, he would have to shave off his iconic mustache.

Well, she did, and he made good on his word.

“Once he came back on Monday, we couldn’t recognize him, and we started making fun of him because he looked so different,” Ionee warmly remembered.

Moving into her junior year of high school, Ionee was looking forward to another season of air rifle and learning even more from her coach, but that all changed in an instant on the morning of Aug. 13, 2019 – the first day of school.

As Ionee was in her third period class, an announcement echoed over the loudspeaker. Warrant Bristol, a respected leader of the NJROTC program for the last eight years, had passed suddenly in a motorcycle accident while on his way to school.

“I just couldn’t believe it. I thought it was a lie,” she said.

As can be expected, all school activities were suspended, along with air rifle. After the team learned what happened, their bond became even more resilient as they clung to one another in their grief.

“He was like our father and our best friend – everything,” Ionee said with tears in her eyes. “We just looked out for each other and made sure everybody was okay.”

After a few months, a new routine began and a new rifle coach stepped forward. Chief Jaycee Killian had been hired just two weeks before the start of school, by Warrant himself. It was agreed that he would be the rifle coach and she would handle drill, color guard and other duties. Though she knew nothing about rifle outside of her own military experience, with Warrant’s absence, she had a new responsibility to the cadets.

“I kind of had to take everything on,” Chief Killian said. “I hurried and got JMIC qualified quick because I had to get them back on the range.”

Without the JMIC (JROTC Marksmanship Instructor) qualification, she and the team weren’t allowed on the range – a place Chief Killian understood they needed to be.

The rapid transition was tough on everyone. Some of the students reached on to her because there was nobody else, but some of them, in her own words, hated her.

Initially, they were standoffish.

“It was so different,” Ionee said. “I’m so used to having Mr. Bristol yelling at us but also making us laugh.”

“He would always sit in one chair, and every time I look at it – it’s just empty,” she said as she struggled to get the words out.

Ionee admits that, as predicted, she didn’t really care for Chief Killian in the beginning. It’s taken them time to build, but slowly, they have.

“I still respected her,” she said. “But, she turned out really cool.”

To learn as much as possible, Chief Killian began reading books and even relied on the cadets themselves to give her tips on how to coach a rifle team.

“They coach me,” she acknowledged.

Now, she and Ionee bounce feedback off of each other to improve positioning and other aspects on the line.

She went on, “They’re amazing. I am so blessed. I have an amazing unit that I love. The cadets are so amazing, they’re so resilient. I couldn’t ask for a better unit. I love them – I truly love my cadets.”

“I wouldn’t go anywhere else,” she added.

Chief Killian traveled with Ionee to Arizona – the only member of her Parlier High School team to compete in the match. Ionee confessed she thought about Warrant a lot while competing in the JROTC event, her first without him there behind the firing line. It tore at her emotions.

“I just broke down the first day I came here because it was so different,” she said. “Winning means a lot to me, because whether he’s here or not, I can feel how proud he is.”

Though the year has been one of the hardest she’s had to endure, she says being able to come and enjoy shooting, laughing with her peers, has helped ease the pain of the loss of Warrant. But the future for Ionee will be brighter each day, breathing in and out the spirit of what her coach rooted deep within her.

Soon, she moves on to the JROTC National Championship, set to fire in March at Camp Perry in Ohio – and, will she win?

“Heck yes,” she said with a beaming smile.