You are here: Home / Features / Is That Radar in Your Pocket? A Portable Chronograph from FX Airguns. 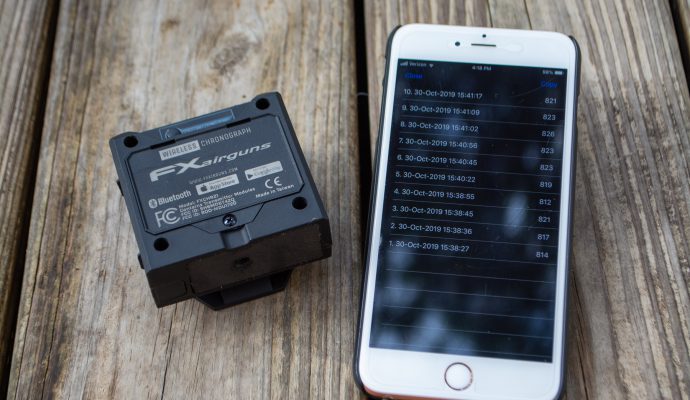 The best legislation ever written is Moore’s law.

Back in the day, I was a techno-geek by trade, slaving away in the high-tech software business. One thing we kept front of mind was Moore’s law. It says that processing power doubles every 18 months. The kicker is that the law assumes “at the same price point.” In the heyday of personal computing that was true. As for now, I’m not sure, but I know that we’re still getting bigger and bigger technological benefits at the same or lower prices. Just consider thermal vision. A few short years ago you would have needed a Congressional budget allocation to buy a thermal scope. Now personal infrared monoculars are just a few hundred bucks.

One beneficiary of technological advancement that’s near and dear to my heart is ballistic chronographs. The folks at FX Airguns have now created a true pocket device that has all the right features: small, light, easy to set up, reliable, and elegant. This little radar chronograph also deftly bypasses the biggest headache for chrony users.

For years I’ve been toting around a set of optical shooting chronograph parts. To get velocity readings, you have to set up gear on a tripod downrange, run a cable back to the shooting bench, hook it to the display and computer, and hope it works. I only say “hope” because traditional chronographs operate visually. They sense the shadow of a projectile passing over multiple sensors and calculate the velocity based on the known distance between “eyes” and the time elapsed between the two sensory inputs. Sounds straightforward, right?

Here’s the fly in the ointment. Since the sensors work by light and shadow, variances can wreak holy havoc with reliability and accuracy. Things like the type of light source, sunny vs. cloudy conditions, shiny or dull projectiles, and even muzzle blast can all wreck a perfectly good reading. It’s a finicky solution that works best outdoors. Getting a chrony to work inside, a common habitat for airguns is an exercise as productive as nailing pudding to a wall.

The FX Pocket Chronograph bypasses all that headache because it uses radar to sense projectile speed. Cops and Major League Baseball have been using radar for years to measure velocity, so why not apply the benefits to shooting? The radar approach brings a variety of benefits.

Lighting doesn’t matter. You can shoot in the dark, the shade, indoors or outdoors.

You don’t have to place gear downrange and shoot through finicky sensor zones. Just place the small Pocket Chronograph on the shooting bench, place the muzzle an inch or few above the top, and fire away. Remember earlier when I talked about lugging “parts” to the range? That’s in part due to my chrony being shot more than once over the years…

No cables or separate computers are required to see your results. The system uses Bluetooth to communicate with a companion smartphone app. Remember that Moore’s Law bit? This setup uses the sophistication and compute power in your phone to not only display but process and record velocity results. Most people are already lugging around a powerful computer with a nice display (their smartphone) so why reinvent the wheel?

Once you install the batteries (3 AAA) you’ll want to install the smartphone app available for both iOS and Android devices. There’s one button on the FX Pocket Chronograph. Press it. Your app will then show a big blinking “Connect” button that establishes the Bluetooth link.

The home screen acts as a real-time display and shows last shot velocity in great big numbers. The app also tracks shot strings and calculates extreme spread, high and low readings, and standard deviation. A shot string view shows a listing of each shot along with its precise time of fire and velocity. The time stamps can be handy when using guns sensitive to rapid-fire, like CO2-powered models. Aggregate results are recalculated with every new shot in the string.

The app software allows you to not only tweak sensitivity settings but create and track profiles. By creating a profile that captures your airgun and pellet information, you can keep recorded velocity data for later review. To test the velocity of H&N Sport Baracuda .25 caliber pellets through the FX Wildcat MKII PCP rifle shown here, I set up a unique profile that captured descriptive information, pellet weight, and velocity measurement preferences.

I’ve been using the FX Pocket Chronograph indoors and out for the past month with a variety of airguns. I’ve measured velocity output of CO2 BB pistols, break-barrel rifles chambered in .177 and .22 caliber, and PCP rifles like the .25 caliber FX Wildcat Mk II shown here. If you want, you can track arrows, bolts, and paintballs too. Once you figure out where to place the muzzle relative to the device, it rarely misses a reading. So far, I’ve found that the Pocket Chronograph works most consistently with the barrel about an inch over the top of the unit with the muzzle about an inch forward of the front face. That not only eliminates the risk of shooting your fancy new toy but also prevents air blast from knocking it over.

You may not be surprised at the technology, but you may be shocked at the price. It sells for just $199.99, placing it within reach of most any serious airgunner.