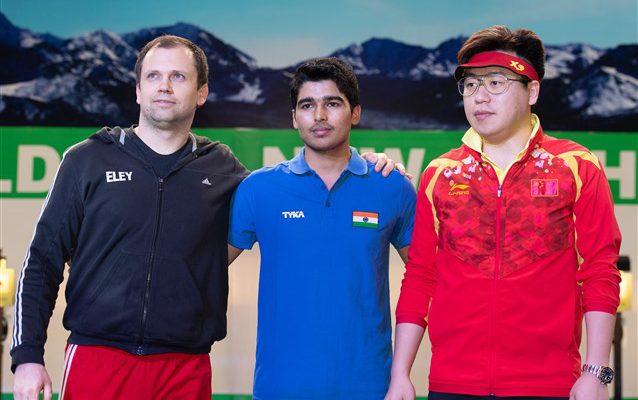 Chaudhary Saurabh turned out to be youngest gold medalist of this ISSF World Cup in New Delhi, so far.

The 16-year old athlete won the applauses of a full-packed final hall, today, as he claimed gold at the 10m Air Pistol Men event. The Indian sharpshooter turned out to be unbeatable, today, thanks to a record-setting performance.

A new world record score of 245.0 points (meaning an average higher than 10.2 points per shot), breaking the previous record of 243.6 points, and winning the gold medal, as well as a Tokyo 2020 Olympic quota place.

Saurabh said: “Winning a competition on my home turf is something unique. It makes me really happy. I think I couldn’t have a better opportunity that this.”

The young athlete is not new to the spotlights of success. He won almost all international competition he participated in. Out of 9 international matches, he won six gold medals, and one silver, in two years. Among his most prestigious trophies, he can count a Youth Olympics title won in Buenos Aires last year, a Junior World Champion title, one Asian Games title and two Asian Championship titles. There’s nobody around, like him.

Today, he was competing in his first senior event ever. And he was doing it with the extra pressure of the home crowd. A pressure that turned into a motivation, apparently.

“If I made it, it’s because of the support of my family, and the guidance of my coaches,” he commented. “I started shooting when I was a kid. There was a shooting range in my village. I gave it a try, and I was hooked by the sport. My coach became my guru, my role model, and I worked hard,” Saurabh continued.

“My family really played an essential role in it. They always supported me. They never said no. They gave me all the assistance I needed to do well in the sport. I hope to continue to perform well to make them proud.”

To finish upon today’s podium, he beat Serbia’s Damir Mikec, who collected the second Olympic ticket up for grabs at today’s final.

Following them, today’s Bronze went to the 2008 Olympic Champion Pang Wei, of the People’s Republic of China, who closed in third place.

The 2019 ISSF Wolrd Cup in Rifle and Pistol events in New Delhi will continue tomorrow, 25th of February, with the 10m Air Rifle Men Final.

Watch the match live on www.issf-sports.org and on the ISSF social media platforms: Facebook, YouTube, and LiveStream, starting from 14.00 (GMT+5.30).