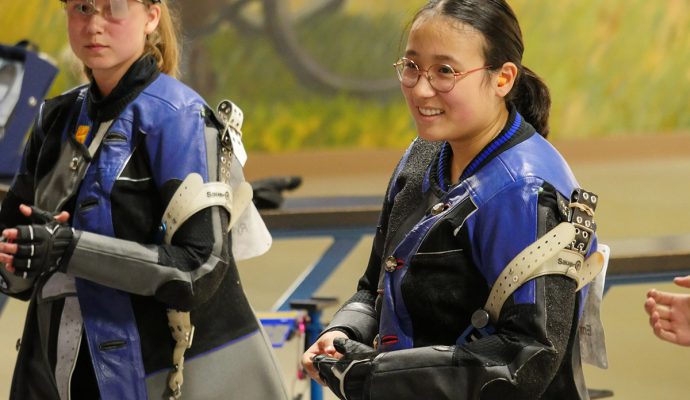 CAMP PERRY, Ohio; ANNISTON, Ala. – Mikole Hogan, 17, of Montgomery, Texas, set a new J2 3×20 national record with a staggering score of 599-48X during the 2021 National Three-Position Precision Air Rifle Championships. Hogan dropped only one point during the standing portion to reach 199-15X for a new 20 Shot Standing Age Group 2 national record score, while also garnering perfect scores of 200 in prone and kneeling.

Hogan earned the record during the Junior Olympic (JO) portion of the Championships, which also saw a new Team 3×20 national record score, fired by the Texas Hill Country Shooters. Team members Elizabeth Probst, Braden Peiser, Briley Sralla and Anne White combined their efforts to reach an overall score of 2363-180X to secure the win and a new bar for future competitions.

Though traditionally conducted at one location, the 2021 Championships split into two to ensure a safer environment for guests and competitors. Athletes participating in the event competed in three-positions (prone, kneeling, standing) for qualification, followed by an Elimination Final for the top eight leading competitors at each location for both the Junior Olympics and the CMP 3PAR events. Athletes in the final fired five shots in kneeling, prone and standing positions before entering one-shot elimination rounds, with the last athlete standing declared the winner.

During the JO match, Emme Walrath, 15, of Kenosha, Wisconsin, and Katie Zaun, 18, of Buffalo, North Dakota, gave spectators in Ohio quite a show during their respective final. On the last elimination shot, Zaun led Walrath by 1.2 points, only needing to maintain her lead to claim the win. After each athlete sent her pellet downrange, the monitors displaying scores for onlookers in the range showed a score of 9.6 for Zaun and an incredible 10.8 for Walrath – tying it up and forcing a shoot off. As the audience members cheered on, Zaun and Walrath loaded and fired one more shot.

With that, the spectators in the stands exploded with applause, congratulating each talented athlete on an exceptional fight for the gold. Walrath, who came from behind to earn the win, openly showed her surprise and excitement for what she had accomplished through her glowing facial expressions.

“I was shaking in my boots,” Walrath said afterward, modestly. “I really have no clue how I did it! Something just empowered me to do it.”

“Katie Zaun is just amazing,” she added. “When I heard our scores were tied, I was shocked. Going into the next shot, my hand was shaking, but I just tried to take the best shot that I could.”

Both Walrath and Zaun showed great sportsmanship and composure on the line after the contest, shaking hands and exchanging smiles.

Walrath returned the following day to overtake the Elimination Final in the CMP 3PAR event as well. Her plan was to go into the qualification round and the finals with a fresh mind, forgetting her hard-fought victory of the day before. She kept her cool and was able to showcase her abilities on the line.

“I was just thinking I had to build up my points in the beginning, which I did, and my positions felt really stable. I was able to get into the zone easily,” she said of her CMP follow-up win.

The top eight individuals at each location were awarded medals and checks, presented by the CMP, with the top three individuals overall receiving additional awards. Teams from each location as well as overall were also recognized. As part of the continued support of youth athletes, the CMP will send $1,000 scholarships to the top three overall graduated seniors of the competition.

For a complete list of results, visit https://ct.thecmp.org/2021N3PARCresults. Photos of the event from both locations can be found on the CMP Zenfolio page at https://cmp1.zenfolio.com/f110931702.