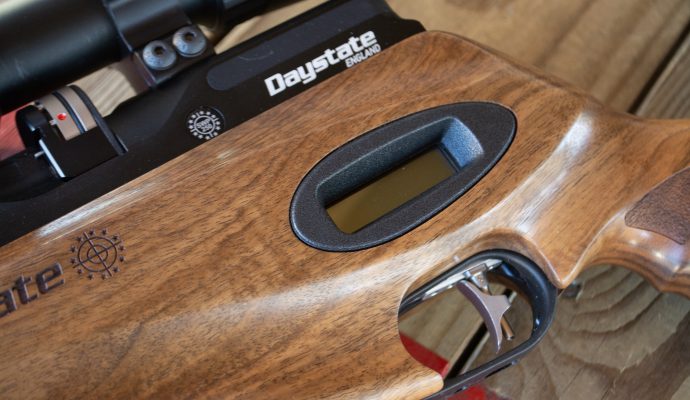 Recently I’ve been seeing a blast from the past on a car company TV commercial. That I can’t remember which company runs the ads makes me question their marketing investment, but that’s beside the point.

The commercial features a “live” action figure of the Six Million Dollar Man. For those of you not yet born when station wagons and rotary phones roamed the earth, the storyline involved an astronaut who crashes on a test flight. He’s horribly injured and near death, but the show’s opening sequence explains the solution. “Gentlemen, we can rebuild him. We have the technology. We have the capability to make the world’s first bionic man. Steve Austin will be that man. Better than he was before. Better… stronger… faster.”

You can guess the rest. Scientists stuff Steve Austin chock full of bionic body parts so he can arm wrestle locomotives and beat a Bugatti Veyron in a footrace.

While this week’s featured air rifle wasn’t involved in a flying wing landing gone wrong, it’s a compelling example of how technology can make things better. And no, it doesn’t cost six million dollars.

The Daystate Red Wolf PCP air rifle recently showed up in our headlines for its near total domination of the Extreme Benchrest Championships. After taking 17 out of the top 25 places, including the top eight, in the Field Target competition, the Red Wolf performed equally well in the 50-yard Benchrest event. When you read more about what makes it tick below, you’ll understand why.

So what does one do with a computerized air rifle? For starters, how about using software to create ideal power levels for your pellet or pellets of choice? The company ships the Red Wolf with default low, medium, and high power settings, which are selectable using the trigger to operate the digital menu system. If you want to tinker, you can set your own power profiles using an optional Daystate programmer. The computer goes a step farther, however. By continuously monitoring the carbon-fiber air reservoir pressure status, it’s able to electronically meter the precise amount of air for each shot to match your desired power profile, maximize shots per fill, and keep velocity constant from shot to shot. The computer has plenty of other functions too. It shows reservoir air pressure to within one-tenth of a bar, keeps track of shots remaining in the rotary magazine, and can accumulate shot count data.

Electronics require a battery and that’s stored in the grip area. This Red Wolf arrived with a partial charge and a charging unit in the box. Since the company claims thousands of shots before the Red Wolf requires a charge, I didn’t touch it. I did all of my shooting over a couple of weeks on the partially charged system and it never ran dry. You will not have to worry about topping off before a day on the range.

There’s one more electronic gizmo to mention—the trigger. No, it’s not connected to your brain, but it is the next best thing. The trigger features an electronic release and is adjustable for length of pull and pull weight. Simply put, it’s effortless. Think about shooting and it fires—almost.

When I took this rifle out of the box, it awed me for lack of a better word. One of the perks of this job is handling some very nice loaner rifles, but this one takes the green-with-envy prize. Make whatever analogy you like – fine swiss watch, luxury automobile, or a dry-aged steak cooked to perfection – this rifle matches those and more. The one shown here has the standard walnut stock (a red laminate version is also available) and it’s perfect. The finish is stunning, and it’s shaped for easy, comfortable, and most important, natural handling. You’ll find contour cuts in the fore-end and finger grooves and texturing in the grip area. The comb is adjustable, and the butt pad is aggressively contoured for a sure fit.

The Red Wolf features a ten-shot rotary magazine. To load, just rotate until the cylinder clicks and locks into place, drop in a pellet, and repeat. Unlike others, this one does not require the user to maintain pressure against the spring while feeding pellets. I like it.

The cocking lever glides. Pull back until it’s perpendicular to the stock and ease forward. It requires almost no pressure to operate and feeding from the magazine is sure. It’s also reversible to the opposite side to accommodate both right and left-handed users.

The Red Wolf is available in two versions—a standard and high-power model. The one shown here operates at 250 bar or 3,626 pounds per square inch. You’ll notice a white medallion on the left side of the receiver that shows maximum fill pressure.

My first shooting outing, besides a couple of test shots at a dead tree in my backyard, was at my world-class indoor range. It’s an 18-yard facility consisting of a card table next to the lawn fertilizer and leftover paint that serves as a not-very-stable shooting bench. The targets are in the far back order under the back porch. Yeah, I know. Classy. Anyway, I wanted to do some quick and dirty zeroing and abbreviated accuracy testing to figure out which pellets to bring to an actual range. You know – the kind with real (stable) benches and targets that aren’t a cardboard box sitting on an old cooler.

I shot a variety of lead and ballistic alloy pellets from Sig Sauer and the H&N Barracuda Match 21.14-grain lead using the medium power setting. Most everything shot well from the Red Wolf—except one. The Sig Sauer Match Pb wadcutters just were not happy in this rifle. I know the pellets are good as I’ve gotten great results from them in other guns. The just didn’t hit it off with this particular airgun. That’s to be expected—it’s always important to spend a little shooting time figuring out what type of pellets your particular airgun likes, or sometimes doesn’t.

Anyway, here’s what I got for my quick and dirty “pre-testing” results.

Based on these preliminary results, I focused most of my outdoor accuracy shooting at the medium power level. I brought the same selection of pellets to the range and fought a 12mph gusting wind coming over my left shoulder. First, I set up targets at 25 yards and did my best to avoid the worst of the gusts.

As you can see, this rifle likes the H&N Sport Barracuda Match pellets – a lot. I’ve had great success with that particular pellet across a variety of guns, so that’s no big surprise. As a side note, the best group at 25 yards with the Barracuda Match measured a tiny .09 inches. Not too shabby, is it?

Since that worked well, wind and all, I moved targets out to 50 yards. I experimented with some groups at the high power setting figuring I might see a little better performance against the wind. Since the Sig Sauer Wraith Ballistic Alloy and Barracuda Match pellets were flying straight, I used those.

So, my high power versus medium power setting didn’t show any real difference, but it was a good theory. That’s my story and I’m sticking to it. However, while the medium power shots impacted about 1.8 inches lower at 50 yards, the high-power shots landed only .40 inches below the 25-yard zero impact point.

The Daystate Red Wolf is a stunning rifle and I’m dreading sending it back. It’s going to cost you between $2,399 and $2,599 depending on options. Is it worth it? If you can appreciate the difference between a Yugo and a Maybach, then absolutely yes. It’s that good. Based on the quick and dirty testing I did with this loaner, it’ll shoot one-hole groups all day long with the right tuning and you’ll get plenty of enjoyment from the process.