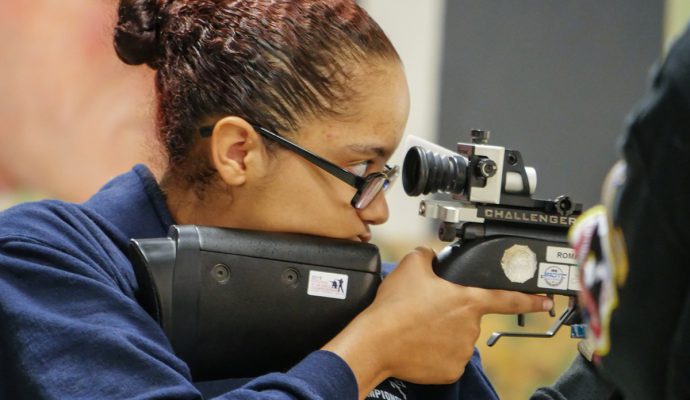 The three-position event consists of two days of competition between high school and club air rifle marksmen – featuring both the Junior Olympic National Three-Position Air Rifle (3PAR) and the CMP Nationals. As in years past, athletes of the 2021 event fired qualifying scores each day, with the top eight competing in a final. Winners from each location were recognized, with overall winners determined from scores of all participating athletes.

Nation Ford High School from South Carolina, Zion Benton High School of Illinois and Ozark High School in Missouri overtook the overall top three places, respectively, in both the Junior Olympics and the CMP Nationals team contests. Nation Ford has been claiming overall medals consistently at Nationals since 2016 – earning at least second or even first overall, not only as a team, but with its individual athletes.

Staying true to form, Nation Ford produced the overall individual athlete in the Junior Olympic match in 2021, with Maya Cameron, 17, earning a score of 653.9 – just sixth-tenths of a point over second place. Nation Ford members also reached third and fifth place overall finishes during the match. The team’s talented athletes went on to earn the second, third and sixth places in the CMP competition.

Also achieving consistent medal-winning showings over the years is Zion Benton, who has been a past overall winner. The team earned second in both the Junior Olympics and CMP competitions in 2021, with multiple members earning medals at the Camp Perry location.

“I’m really, really proud of them,” said coach Master Chief Dan Hackstein. “They’ve worked hard for this competition. We’ve been very, very fortunate at our school to have been able to practice since right after the week of the Fourth of July (2020), so we’ve been working hard –  and it’s nice to see the practice pay off in these National competitions.”

He went on to talk about graduated senior Halie Creekmore, 17, who earned fourth overall in the CMP National event. Creekmore finished second in the competition her freshman year in 2018 and led at the Camp Perry location in 2021. Likewise, teammate Amarissa Jackson, 17, earned fourth overall in the Junior Olympic event and fifth in the CMP. With Creekmore moving on next year (working toward a future in graphic design), Jackson will have the chance to fill an important role at Zion Benton as she enters her senior year.

“Amarissa really came on strong this year,” Hackstein said. “She is just so consistent, and she’ll lead our team next year.”

A tournament chess player and honor student, Champagne’s coach credits him for bringing “thoughtful contemplation” to the rifle team.

“Jason is the most focused and methodical marksman I have coached in eight years,” said Jack C. Hays coach LtCol Don Wimp. “It is unusual to find a shooter who is truly never satisfied and whose goal is perfection every time he shoots.”

Champagne will be attending Texas A&M in the fall, pursuing a degree in engineering toward employment in the space exploration industry.

The top eight individuals at each location were awarded medals and checks, presented by the CMP, with the top three individuals overall receiving additional awards. Teams from each location as well as overall were also recognized. As part of the continued support of youth athletes, the CMP will send $1,000 scholarships to the top three overall graduated seniors of the competition.

For a complete list of results, visit https://ct.thecmp.org/2021N3PARCresults. Photos of the event from both locations can be found on the CMP Zenfolio page at https://cmp1.zenfolio.com/f110931702.

Next up, the Precision CMP National Championship/National 3PAR Junior Olympic Championship is set for July 17-19 in Anniston and Camp Perry. Learn more on the CMP website at https://thecmp.org/youth/national-three-position-air-rifle-championships/.