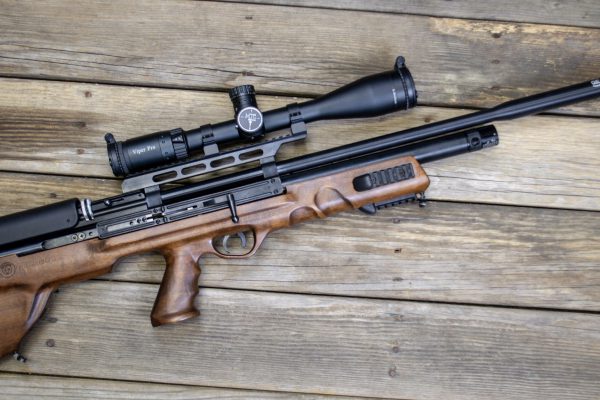 As you might guess from the name, the Hatsan BullBoss air rifle is… hang on to your shorts… a bullpup design. If you’re not up on esoteric gun terminology, that means merely that the action is set far back in the stock. The chamber, magazine, and bolt are all located behind the grip and trigger area rather than in front as with more traditional rifle designs.

Other than looking cool, there’s a practical benefit to bullpups. You can make the overall profile much more compact without sacrificing barrel length. To a point, a longer barrel is a good thing as it can produce higher velocity. With a bullpup, you can get that velocity benefit of a longer barrel without a handling penalty in overall length. Also, much of the rifle weight is closer to your body, so it’s arguably easier to handle and hold the rifle. When you think about it this way, bullpups make a lot of sense. With a traditional design, you’re “wasting” a lot of space in the stock area that’s normally just useless wood or polymer material in the stock area. The bullpup model just puts that space to efficient use.

The bottom line is this. The Hatsan BullBoss air rifle is not light, weighing in at 9.5 pounds before you add a scope, but when you shoulder it, you don’t feel all that weight because the center of gravity is much closer to the shoulder. And to be clear, in my book, a heavy rifle is a good thing. Inertia is my friend with stability, and therefore accuracy, but your mileage may vary, and that’s OK.

The Hatsan BullBoss Air Rifle is a pre-charged pneumatic with a 230cc air removable reservoir tube under the barrel. On the forward edge of the air cylinder, you’ll find a manometer (pressure gauge) that allows you to monitor the status of remaining air. Just behind that is the filling port that uses an included brass probe. A rotating plastic sleeve spins to cover the fill port opening when you’re not using it because keeping dust and range dirt out of there is a good thing. The cylinder packs 200 bar, or just under 3,000 pounds per square inch.

The cocking mechanism is brilliant. I love it. The side-mounted lever on the right has a one-inch (give or take) vertical handle used to pull the cocking lever back. When you hear the “click” just past the 90-degree position relative to the receiver, you can bring the bar forward again to rest against the stock. The design lends itself to big muscle use. In other words, the long (about four inches) cocking handle doesn’t rely on finger strength to operate – it uses your whole arm. As a result, the process is near effortless. I really like how it works.

While we’re talking about cocking the gun, I ought to mention the other “bolt” you’ll see just behind the cocking lever. This “bolt-let” is small and serves to lock the rotary magazine in place. When you push it forward, you’ll find a notch that allows you to raise the mini-bolt into a locked position. At this point, you’ll need to bring the cocking lever back, and only then can you remove or reinstall the magazine.

As a multi-platform shooter (centerfire and air), here’s a feature I can appreciate. The BullBoss sports a girth-friendly scope mounting rail. It’s a Picatinny Rail but with an 11mm traditional airgun mount resting on top. The net-net is that you can use either type of scope rings on the rifle. For example, I wanted to mount the MTC Viper Pro on the BullBoss. That scope sports a 30mm tube, but I didn’t have a slightly unusual set of 30mm rings that mount on an 11mm base. Sure, you can order them online, but that doesn’t support my instant gratification habit. No worries, I have plenty of 30mm rings for Picatinny rail mounts, and that solved the problem.

To test out this rifle, I mounted a super-nifty scope provided by MTC Optics – the Viper Pro. We’ll do a separate feature just on that scope later – there’s a lot more to talk about than we can fit in this article. For now, know that it’s super clear, has parallax focus adjustable down to 10 yards, a five to 30x magnification range, and adjusts in ¼ MOA per click increments. It’s also got an illuminated reticle which is handy for targets with black or darker-colored backgrounds. The surprise hint is the internal elevation drum that allows you to customize your turret to minutes of angle, mils, or even yardage.

I zeroed the Hatsan Bullboss air rifle at 25-yards using H&N Sport Barracuda 30.86-grain pellets. While on the heavier side of the pellet-weight midpoint for .25 calibers, they still fit into the BullBoss rotary magazine. That’s something to keep in mind. Unless you want to shoot super heavy “sluglets” like those offered by Hunters Supply, you shouldn’t run across too many pellet types that are too long to fit in the rotary mag. I also tested the H&N Barracuda Hunter 27.47-grain and JSB Exact King Diabolo 25.39-grain pellets.

Once zeroed at 25 yards, I shot a couple of five-shot groups with all three pellet types to get a feel for the accuracy of the Hatsan BullBoss air rifle. Here’s what I found.

That worked out pretty well, so on my next outing, I decided to stretch out the range to 50 yards. It was a beautiful day, although the wind was gusting to 8 mph or so from about the 10 o’clock position. I did my best to shoot during lapses to minimize the impact. At 50 yards, I got the following five-shot group results.

Even though it was a bit windy, I decided to take targets out to 100 yards. The 50-yard results were encouraging, so why not? With the JSB Exact Kings, I was getting average five-shot groups of 3.6 inches. The H&N Sport Barracuda Hunter hollowpoints averaged 2.8 inches while the long-range hunting Barracudas averaged 2.25 inches. It’s important to note that the 100-yard groups were very horizontal in pattern dispersion – a clear indication that wind was swaying those pellets around.

I chronographed all the pellets I tested for accuracy to see how much oomph this bullpup carried. Using a Shooting Chrony Beta Master placed about 10 feet forward of the muzzle, I fired multiple shots of each ammo type and averaged the results.

I want one of these. I’ve always liked the feel of a metal and wood gun and weight in my book is a good thing. I love the stability and am perfectly happy to tote around the extra poundage. In this respect, the Hatsan BullBoss air rifle feels great. The weight is well distributed so while you’ll feel it pulling it out of the case, you won’t when it’s shouldered. The magazine is among the most reliable and least finicky designs I’ve used. While you can’t stuff jumbo extra-long pellets into this rifle, I’ll take that tradeoff.

The Hatsan BullBoss is a beautifully made rifle well worth its price.

* Above maximum muzzle velocity figures may differ depending on the pellet weight & shape.

**Optimal Velocity is the number of shots within 85% of peak velocity.