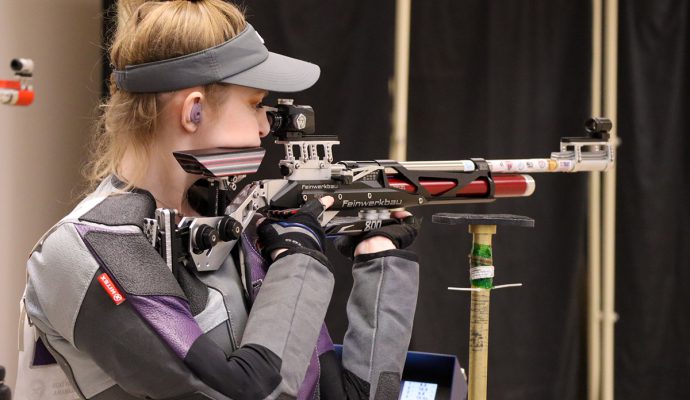 Allison Henry, 18, of Granbury, Texas, has been selected as the top applicant for the Civilian Marksmanship Program’s (CMP) 2020 Carolyn Hines Memorial Scholarship. This highly selective honor brings with it the first $5,000 scholarship ever awarded by the CMP.

CMP’s chairman and CEO, Judith Legerski applauds the high standards set by Allison as this initial awardee of the Carolyn Hines award.  “Dr. Hines was an amazing woman who benefitted from assistance during her college years, leading her to a stellar career and a lifetime of generously helping others.”

“I grew up hunting with my dad, but grew to love shooting on a competitive scale after attending a summer camp that my high school hosted,” she said on her roots in marksmanship.

While in high school, Henry maintained excellent grades as an honor roll student and was a member of the Granbury High School Marine Corps JROTC (MCJROTC) rifle team.

The Granbury High School team members earned themselves the JROTC National Championship title in 2018, with Henry placing third overall of the individual competitors. That same year, she earned her Junior Distinguished Badge.

Granbury returned to an overall win in 2019 at JROTC Nationals as well as a third-place finish from Granbury Team 2 – Henry’s firing team.

“Working with Granbury’s MCJROTC rifle team has given me a world of opportunities to help grow as a shooter and an individual,” Henry said. “My coaches, Mr. Becker, LtCol Casey, Chip Miles and the cousin who got me into shooting, Bob McCollum, have been incredibly influential over the years.”

In her senior year, Henry helped lead her team to an overall Marine Corps title during the 2020 JROTC Service Championships – a title the team also held the two previous years. For her own performance, Henry finished third overall as a Marine Corps individual in the 2020 match.

“I will definitely miss the early mornings and late nights with my team!” she added.

Outside of shooting, Henry has been involved with a multitude of community service opportunities, most often based through a veterans organization, as well as working with local businesses on logo designs and other marketing projects.

She was also involved in her county’s 4-H Shooting Sports program, POWER SET (an academic program for young women offering opportunities in science, technology, engineering and mathematics), University Interscholastic League Spelling and was a JROTC recruiting offer and platoon commander.

Her Granbury coach, Lt. Col. Scott Casey, said of Henry in his Letter of Nomination for the CMP Scholarship, “As Allison’s rifle coach for the past four years, I have had the opportunity to observe her on a daily basis. During this time, she has exceeded all expectations . . . Her personal and professional acumen and integrity are without question. The character and leadership of this young lady has few equals.”

He goes on to speak of her capacity as an ambassador of the sport as well as a role model for younger marksmen to emulate and calls her, “an ideal representative of the Civilian Marksmanship Program.”

To date, her rifle career has led her to two Junior Olympic qualifiers in air rifle and three-position, the 2018 American Legion Texas State Individual and Team Champion titles, and she helped lead her JROTC team to the 2018 Orion League Precision National Championship, where she was named the MVP of the tournament.

Henry said her time in marksmanship has taught her true dedication and has also helped her develop her time management and discipline.

Looking to her future, Henry is now eager to become involved with a new coach, a new team and creating new lasting friendships. As she works her way through Murray State, along with other personal goals, she’ll always have her sights set on a high goal: “The Olympic Dream, I think, lives inside everyone. Very few people make it to the world’s stage, however,” she said. “It’s honestly just something I’ve always wanted to do, and shooting has just carved a pathway for me to do so.”

The Carolyn Hines Memorial Scholarship Program is named after an outstanding CMP board member who succumbed to cancer in late 2019.  Dr. Hines was a huge supporter of CMP scholarships, believing strongly in the value of a quality education.

The annual $1,000 CMP Scholarships are available to graduating high school JROTC, 4-H and other junior shooting club members. Scholarship applications are only accepted if they are received completed and if the applicant is a U.S. citizen, shows good moral character, is a contributing member to society and is a scholar marksman.

While the CMP budgets some $170,000 each year for scholarship awards, this year’s scholarship pot was sweetened this year by the addition of a generous $10,000 donation from the Garand Collectors Association.  Allison Henry topped the field of more than 130 scholarship recipients, and was awarded this first-ever prestigious honor.