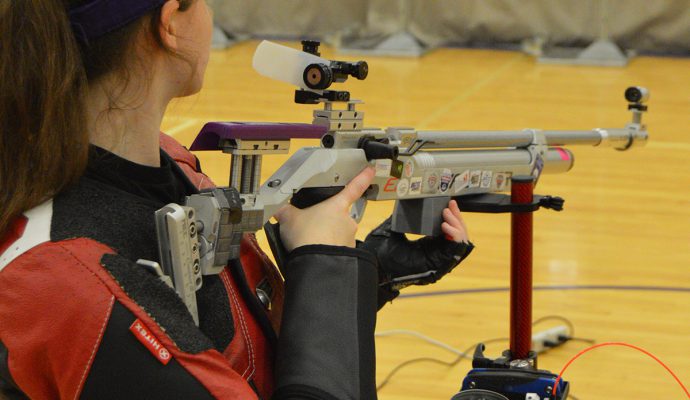 Sarah Folsom, 17, of Granbury, Texas, is a quick learner. In only her first year as a marksmanship athlete – and during an impeding global pandemic – she produced enough consistent competitive performances to earn a prestigious Junior Distinguished Badge, #1526. On top of that, she earned it in the shortest amount of time in her school’s history – just three short months.

According to CMP records, Folsom earned her first EIC points in December 2020 and her final points in March 2021.

“To be honest, I didn’t know what a Junior Distinguished Badge was until I got my bronze one,” she admitted. “After that, I did make it my goal to get the gold one ASAP.”

Folsom is a member of the Granbury High School Marine Corps JROTC rifle team – past national-level champions. The team’s heritage is saturated in success and filled with several impressive alumni, with Folsom’s incredible feat adding a worthy standout mark to the list of the team’s achievements.

“I feel grateful,” she said of being the athlete who has earned her badge the fastest in Granbury’s program history. “Granbury has an amazing team, and I’m glad I am a part of it with fellow amazing athletes and coaches.”

Having already received her actual badge, Folsom keeps it on display upon her awards rack at home, just waiting for the moments when she can wear it proudly on her JROTC uniform.

Along with becoming a Junior Distinguished Badge recipient in 2021, Folsom worked with her teammates to allow Granbury the overall win in the JROTC Virtual Championship – adding yet another National Title to their name. Her personal performance on the firing line also led her to the overall individual win over the field of over 200 other athletes in the match.

“It has been amazing to watch her go from picking up a rifle for the first time in September to being a National Champion,” said her coach, LtCol Scott Casey. “She clearly is one of the most coachable shooters we have had come through the Granbury program, and her high level of dedication is evident by achieving the DM Badge in record time.”

Folsom’s interest in marksmanship began her sophomore year of high school when she attended Granbury’s annual battalion rifle qualification, held for those students not already on the rifle team. She earned first overall in the competition and was soon asked to join the team.

“I didn’t really know what the sport was until I actually started shooting in competitions,” she said. “I found that I loved shooting a lot, and I wanted to continue doing it.”

She officially began with the precision air rifle team in mid-August 2020 and has since competed in a handful of competitions. Outside of air rifle, she also trains in smallbore on her own.

Despite the pandemic affecting the formative time of her career, Folsom managed to keep a regular practice schedule to sharpen her skills. She met with her team after school on Mondays and Tuesdays for general training, with PET (pre-event training) positioning focus reserved for Wednesdays. Matches were typically fired on Thursdays, while Fridays were set aside for more specific emphasis on areas that needed improvement. Of course, she gives praise to the leadership at Granbury for shaping her abilities during those training sessions.

“My coaches are amazing,” she said. “From my first step in shooting to right now, they’ve helped me with everything.”

Like most marksmanship athletes, the mental aspect of the sport seems to be the hardest for Folsom to regulate. She admits that she easily becomes distracted by cheering from the crowd, or staying unnecessarily fixated on her scores or even letting her mind wander to something outside of shooting. She discovered tricks along the way that have helped her keep the disturbances at bay, including ear plugs to rid the background noise and counting down from five to allow herself to refocus on the task at hand.

“I enjoy shooting because it requires you to clear your mind and only focus on what’s happening in the moment,” she said.

Folsom’s dedication to formulating her craft is undoubtedly commendable. Though much of her drive materializes from her own inner strengths, she also draws inspiration from observing the commitment of LtCol Casey to his athletes. He supports his team fully – paying for hotels, uplifting students on their bad days and, most importantly, providing positive guidance on the range.

“He truly is amazing, and I couldn’t have asked for a better coach,” Folsom said.

She lends additional credit to John Becker, who assists the team behind the scenes and has been beneficial to the mental side of the sport for Folsom. Becker is also the Texas CMP State Director – helping to lead the growth and legacy of youth programs in the area.

“He’s a great coach and puts so much effort into this team,” Folsom said of Becker.

For the future, Folsom plans to stick with the sport and is currently researching the best NCAA rifle programs that fit her style. She’s keeping up with her training during the off-season this summer, attending the CMP’s Junior Rifle Camps this past June where she was able to learn even more valuable advice from the NCAA camp counselors who lead the one-on-one training on the range.

To learn more about the Junior Distinguished Badge program, visit the CMP website at https://thecmp.org/youth/junior-distinguished-badge/.