You are here: Home / Hunting / Got Squirrels? Check out the Gamo Squirrel Master Classic 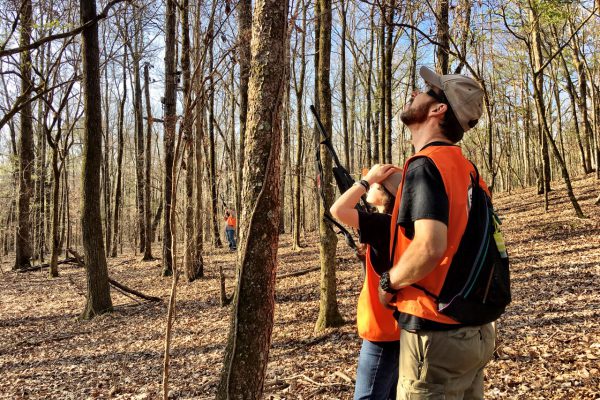 Got limb-chickens in your neighborhood? Who you gonna call? Squirrel Masters!

We’re here in the Alabama countryside, about 30 miles west of Montgomery with the folks from Gamo, a gaggle of outdoor TV celebrities, and a posse of young’uns from the Alabama 4-H. Why? It’s time for the annual de-rodenting known as the Gamo Squirrel Master Classic.

They’re up there. Just taunting us.

Here’s how it works. Each team is captained by an outdoor television program host and rounded out with a youth member of the Alabama 4-H and some media hacks like me. This year, the Classic featured teams from Realtree (I put that first because we were a shining example of awesomeness), Bone Collector, Buck Commander, Buckmasters, Ralph & Vicki’s Archer’s Choice, and Doug Koenig Championship Season. If any of those sound familiar, it’s because you’ve seen them on either the Outdoor or Pursuit channels. Even though we were awake at 4am, we didn’t manage to make it to the woods until just after sunrise.

I know what you’re thinking. “Great. A bunch of television and outdoor media people. I thought this was supposed to be a respectable event.” Never fear. That’s where 4-H comes in. Each team featured a member of the Alabama 4-H program.

When you think about all that’s wrong with the world, consider that just in the state of Alabama, there are over 184,000 kids actively involved in 4-H. Of those, 2,268 (at this moment) are involved in the 4-H S.A.F.E. program. That stands for Shooting Awareness, Fun, and Education. According to the Alabama Cooperative Extension System (ACES), “S.A.F.E. is a youth development education program that emphasizes peer mentoring and positive interactions between youth and adults. 4-H S.A.F.E. uses the skills and disciplines of safe shooting to teach the principles of responsible firearm ownership and assists young people and their leaders with learning and using essential life skills.” Judging by the gun handling and skills demonstrated by our 4-H participants, the program is doing exactly what it aims to do. Aliyah making us proud in the range competition segment.

With all the adult egos present, you know there had to be fierce competition. And there was. The two-day program encompasses two different squirrel hunts where each team goes off into their designated hunting fields with a local guide, professional dog handler, and most importantly, an enthusiastic squirrel dog. Molly is giving us a subtle hint to get on with it.

Back in High School Physics class, our teacher swore that perpetual motion was impossible in the known universe. I’m here to tell you that’s not true and that my teacher obviously never met a squirrel dog on its way to the office. Ours was Molly, a real pro, and she didn’t disappoint. Apparently powered by squirrel-scent and the occasional self-imposed mud bath to cool off, she tore into the woods the same way I attack a double-cheese and pepperoni pizza. Even while checking virtually every tree for fresh squirrel activity, she still covered miles. It was all we could do to keep up. OK, to be entirely truthful, maybe we couldn’t always keep up with Molly’s pace. Rest assured that the chastised us with dirty looks when we were too slow. Fortunately, when she found us some limb chicken, she’d stop and bark at the base of the offending tree, giving us time to catch up and resolve the situation with our Gamo Swarm Maxxim .22 caliber pellet rifles. Aliyah is on a squirrel.

With all that commotion and multiple hunters engaged, you might wonder how squirrels are claimed by individual team members. Our posse numbered 12 in the morning hunt and early on we established the time-tested rule of deciding who actually got the winning hit by calling it first. You know, like calling “Shotgun!” before a car ride. As you might imagine, every squirrel downing was punctuated by exactly 12 simultaneous voices shouting, “I got that one!” Being an on-the-ball student, our 4-H shooter Aliyah caught on quick. According to her, she was responsible for all the squirrels brought home by team Realtree. Clever girl. Wanna see big kids have some fun? Given them Daisy Red Ryders, a field chock full of targets and just 30 seconds on the clock.

Between hunts, we had to put some Gamo Swarm Maxxim pellet rifles and Daisy Red Ryders to good use on the competition target field. The Daisy Red Ryder Celebrity Team Challenge portion of the event had pairs of outdoor television personalities blasting away at targets with the Red Ryder BB rifle for 30 non-stop seconds to see who could hit the most targets. Chock full of tempting targets like balloons, Daisy ShatterBlast Clay Targets, and RocketShot tin can launchers, there were plenty of things to perforate. How much damage can you do to all these targets in 30 seconds with a Daisy Red Ryder? We found out.

The other half of the competition pitted our youth shooters against each other using their Gamo Swarm Maxxim air rifles. Firing ten shots from standing, kneeling, and prone positions, the student hitting the most targets scored maximum “squirrel points” for their team. To keep the team score comparison consistent, winners of the two competitions were awarded extra squirrels to their overall count. For the hunt, the Gamo folks supplied us with the new Gamo Swarm Maxxim. The unique thing about this rifle is that it’s a break-action and a ten-shot repeater. The rotary magazine above the action lines up a new pellet with each cock of the barrel. Of course, you have to cock the rifle for each shot, but while you’re in the field, you don’t have to fumble around with finding and inserting tiny pellets into the chamber while engaged in tree rodent combat. Better yet, you can carry a pocket full of magazines for fast reloading. As you might imagine, the firing was fast and furious at times, but the magazine mechanism performed reliably. As for accuracy, just ask the squirrels.

So did your favorite outdoor TV show team take top honors? Squirrel counts were a closely guarded secret until the final weigh-in and awards ceremony. The Buckmasters team brought up the rear in the celebrity range portion of the competitions but stomped us all in the woods with a final tally of 45. Doug Koenig’s Championship Season team brought some pressure with a second-place finish of 35. As for me and the Realtree team? We tied for fourth place with a total score of 22. Stated differently, I see that as a “top five” finish in the world. OK, so this is not us on the winner’s podium, but congratulations to Team Buckmaster anyway.

So we didn’t win, but that’s OK because we had the best 4-H member experience. Our shooter Aliyah successfully completed her first hunt. Judging by the ear to ear smile, it certainly won’t be her last.