You are here: Home / Competition / Gold Medals in Women’s Trap, Air Rifle and Air Pistol Mixed Team Events at Championship of the Americas 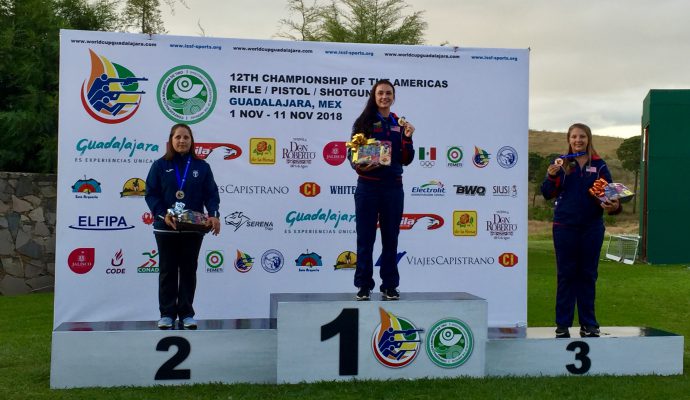 The USA Shooting Team picked up nine more medals today in the Mixed Air Rifle Team, Mixed Air Pistol Team and the Women’s and Men’s Trap events at the 12th Championship of the Americas (CAT) in Guadalajara, Mexico.

Browning (Wooster, Arkansas) and the rest of the U.S. women competing in this event – Ashley Carroll (Solvang, California) and Aeriel Skinner (Jackson, California) – qualified for today’s Women’s Trap Final. Carroll even set an Americas Qualification record with the top score in the competition of 121/125 targets.

Once in the Final, Browning would hit 45/50 targets to win the gold medal. Carroll was eliminated in the bronze-medal position with 34 hits and Skinner in fourth place with 29.

“It wasn’t my best score in the world, but I felt consistent,” said Browning. “The lighting was really bad so I think the key was staying aggressive. When you can’t see the well, you’ve just got to shoot it really fast. The first round today was the first time the sun came out during the match, so I had to change lenses, and of course the second the Final starts, a storm comes through and it starts raining on us and the lighting changes, so it was not ideal. Obviously, the quota was the goal, but we can’t put any unnecessary pressure on ourselves and just needed to out there and do what we needed to do.”

On the Men’s Trap side – the top finisher for the United States would be 2008 Olympic gold medalist Glenn Eller (Katy, Texas/U.S. Army Marksmanship Unit) who won bronze. Over the 125 targets in Qualification – Eller would only drop one target in his second round of 25 targets to enter the Final with the highest score of 124. Once in the Final, however, Eller would drop five targets early in his first 20, but he continued to fight through to be eliminated in the bronze-medal position with 33 hits.

He, Grayson Davey (Anchorage, Alaska) and 2014 CAT silver medalist Jake Wallace (Castaic, California) won team silver for their combined Qualification scores. Davey, 17, finished Qualification just one target out of a potential Finals berth with a score of 117/125 to finish in eighth place. Wallace finished in 14th place with 116 targets.

Once in the Final, both American teams were within a fraction of a point of each other until the Final series when Lagan/Mowrer would pull ahead by 1.5 point to set an Americas record and win the gold. Lagan also won silver in Women’s Air Pistol yesterday. No quotas were available in either mixed team event at CAT.

Competition continues tomorrow with the Trap Mixed Team event with Finals later in the day.

About CAT: The Shooting Confederation of the Americas (Confederaciòn Americana de Tiro – CAT) was founded and recognized by the ISSF in 1973 as the Continental Confederation for the Shooting Sport for all countries of the North and South America.

Shikar Safari Club International Foundation: USA Shooting received a generous grant of $50,000 to support the Pistol program from the Shikar Safari Club International Foundation.  The grant will be used to prepare our athletes for 2020 Olympics through training camps and domestic/international competitions.  Funds were used for the World Championship in South Korea and will be used for CAT as well. Throughout the years, the Shikar Foundation has been a huge supporter of USA Shooting; providing funds that would build a Trap bunker and Skeet field.  They also financially supported a project for the 25m Rapid Fire and Sport Pistol targets that were converted in 2010 at the Olympic Shooting Center. Learn more here.