You are here: Home / Competition / Gold-Medalist Ginny Thrasher Thinking Back and Looking Ahead to Olympic Dreams 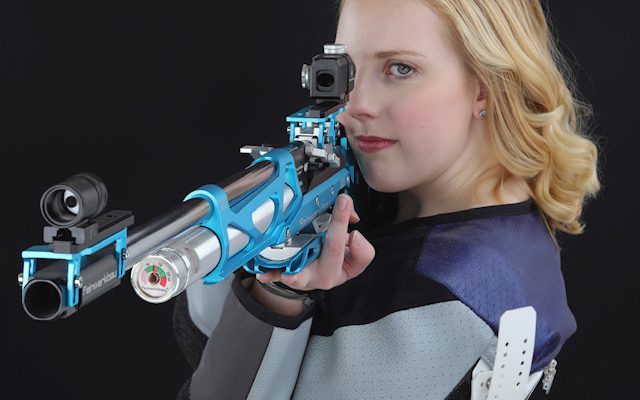 “When you’re in the midst of it, you don’t know that it’s this amazing thing that most people don’t get.”

For those within the rifle community, her name may sound familiar, and it is certainly one penned within the history books.

Reviewing Ginny Thrasher’s list of accolades features a marksmanship success story that has spanned less than a decade – beginning at the age of 14 on a hunting trip with her grandfather and hurdling through a notable collegiate career.

In 2016 when Ginny earned the first gold medal of the Rio Summer Olympics for Team USA – the youngest female to ever do so. Her first Olympic showing, she led the Women’s 10-meter and set a new Olympic record with a finals score of 208.0!

“There are so many feelings associated with 2016 for me … I didn’t realize it at the time, but that was the year that all athletes dream of,” the now 23-year-old said. “Going to the Olympics was one of the most amazing and singular once-in-a-lifetime experiences that not everyone gets … It was amazing,”

Returning to the United States after the Olympics in 2016 presented a swirling new world for Ginny. As a collegiate athlete on the West Virginia University (WVU) rifle team, she suddenly found herself the most famous person on campus – often stopped while walking to class or shopping for groceries, being asked for a picture or an autograph.

The overwhelming response of the country, from strangers to national media organizations, turned attention to the sport of rifle and gave Ginny a sense of pride as she realized the impact she had made not only on her own life but for the entire marksmanship community.

“That’s something that athletes in other sports experience all the time, but it’s not something rifle shooters typically experience,” she said. “I was very, very grateful to have the community support, and it was a lot of fun to go and be invited to different events and speak to different media outlets and truly represent my sport.”

She went on, “It was getting a lot of attention at a time when our sport’s not very common, not a lot of people know what it is … So the more I could answer people’s questions to advocate and to educate, to me, that was a huge opportunity.”

With her medal carefully tucked away in a bank lockbox for safekeeping, Ginny has done her best to become accustomed to her new reality. As she went back to competing with her WVU teammates in 2016, she found herself sometimes distracted by the attention.

“It definitely took some adjusting – getting used to my normal rifle matches where they might be calling athletes to the line and you have 10 young girls who want to take a photo with you and get your autograph,” she said. “I’m proud that I can try to be a role model and that people look up to me, but at the same time, it’s hard to compete when you’re being pulled in different directions by different people.”

“I’m a lot better at that now then that I used to be,” she added. “There’s kind of a learning curve.”

Luckily, public response didn’t stop her from staying committed to her own rifle performances while also supporting the performances of her WVU team. She says the best parts about being a part of a NCAA rifle team are the resources, educational opportunities and the chance to create lasting connections.

“At West Virginia, we talked a lot about legacy, and as the rifle team with historically the most track record of NCAA championships … it was about leaving the team, leaving the university better than you found it,” she said. “It felt like it had a greater purpose … you meet friends and teammates you’re going to have for life.”

Her senior year at WVU was even more special for her and her teammates as the school hosted the 2019 NCAA Championships for the first time in collegiate history. Rifle fans within the Coliseum, WVU’s basketball arena, even broke the attendance record.

After graduation in May 2019, she didn’t wait to keep her rifle career moving forward. She immediately moved to Colorado Springs to train at the Olympic Training Center, where she has worked as a full-time professional athlete ever since. She plans to stay in Colorado Springs for the next four years, hoping to become a repeat Olympic athlete.

“I’m really having a fun time exploring a new location, living in a new place, being able to spend more hours training, doing what I love, taking a bigger role in the national team. That’s been great,” she said. “I’m really enjoying it.”

At the Olympic Training Center, Ginny has had the opportunity to reconnect with National Rifle coach Dan Durben, former director and chief instructor of the Civilian Marksmanship Program’s (CMP) Summer Air Rifle Camps, where he stayed for over a decade. A 1988 Olympian himself, Durben has had past success as a trainer, serving as the National Rifle Team coach 1997 to 2000 and the Paralympic Shooting Team from 2003 to 2008 – leading multiple teams to the Olympics.

As a junior, Ginny attended both the three-position and standing CMP Camps, under Durben, and was excited to train under him again at the Olympic Training Center.

“The creator extraordinaire, I guess you could call him … the Megamind behind the Summer Camps was Dan Durbin, who is now my National coach, who I see and talk to every single day,” she said. “It’s really cool to me that I can kind of see the connections with some of the things.”

She went on, “You know you’re really getting high-level information and coaching at those camps – we can prove that because Dan is now a very successful National coach, and not for the first time either. So that’s such a great opportunity.”

“I honestly cannot speak highly enough of that program,” she said. “I think it’s really important because you’re growing that generation of athletes to want to shoot in college, and then you’re taking the generation of college athletes and teaching them how to coach better … a lot of them go on to be collegiate coaches, a lot of them just go on to coach their local high school or their local junior club. And that is so important too, so I think there’s really good longevity in the CMP Camps system.”

Ginny admits she has matured immensely as an athlete since she was young, learning from so many challenges and experiences both on and off the firing line.

“I feel like going into 2016, I was kind of this wide-eyed little 19-year-old, going in as the underdog,” she said. “After hopefully going into the 2021 Olympics, if I qualify, I can go in more as a professional athlete with more of an adult relationship with my sport … knowing more about what I’m getting into, being able to handle it, embracing the fact that there are challenges and that your career, just like everything in life, is a roller coaster. There’s good times and bad times, and they feed off of each other, and they make each one more special.”

“Trying to be a better teammate, trying to meet more selfless, trying to worry more about the sport and the mechanics of it. Even my understanding of how each position works is so much better now than it was 2016,” she added.

Trials for the postponed 2020 Olympics were completed for air rifle before the COVID-19 pandemic hit. Unfortunately, Ginny found herself without a spot on the team. But, with one smallbore trial down and one to go, Ginny is leading overall and has the potential to again represent the United States. The final trial has not been set but will hopefully take place at the beginning of 2021.

Whenever it happens, Ginny will be ready.

“We’re in a good place and we’re just staying focused on doing everything possible that we can,” Ginny said. “The goal is to be able to say to ourselves, ‘You did everything. You did everything so now you can go compete with confidence.’ If I can do that, I’m confident the outcome will take care of itself.”

Outside of training, Ginny has been hard at work promoting her brand – launching her own website (www.ginnythrasher.com) in August. There, followers can keep track of Ginny as well as purchase autographs and other merchandise. She has also invented her own kneeling roll, a project she developed while in college.

When she noticed the filling of her kneeling roll would shift during competition, altering her position as time went on, she generated her own roll with compartments to eliminate filling movement for a more consistent position hold. She even created a prototype out of sandwich bags that she eventually took to the sewing students on WVU’s campus, who put together a more tangible model.

After showing the restructured prototype to Maik Eckhardt, marksman and owner of the shooting equipment company, MEC, out of Germany, they worked together to perfect the design. Ginny’s kneeling roll is currently in production and will be available for purchase around the world.

Ginny also has other unique projects in line as she waits for the Olympic road to reopen – ideas that she’s holding onto for now.

“We always have a few more irons in the fire, but we’ll let them heat up a little bit more,” she said with a laugh.