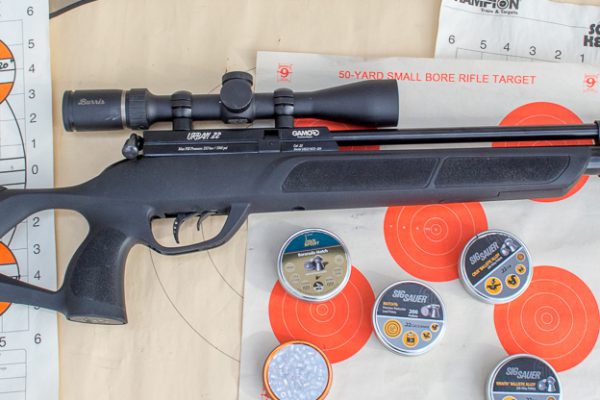 Got suburbia? Not enough land to shoot? Has your homeowners’ association discouraged you from building a shooting range in the front yard?

If you’re reading this, then you already know that airguns are a great solution for areas not appropriate for fire and brimstone-type firearms. While certainly not toys, and all safety rules apply, the small and light projectiles moving at lower velocities are far less likely to travel outside of the confines of a properly configured target area. And of course, the noise level is orders of magnitude less, so neighbors (probably) won’t start a WhiteHouse.gov petition calling for your deportation.

We originally asked Gamo for a loaner because of the attractive price point for this pre-charged pneumatic air rifle. As I write this, Pyramyd Air has them available for just $299.99. That’s a heck of a deal in my book.

When the Gamo Urban 22 arrived, I quickly found a whole different collection of attributes that make this airgun a keeper. First and foremost is the handling. This little carbine (for lack of a better word) is just so darned handy. It balances effortlessly and weighs just 6.7 pounds although it feels like a lot less. I think the light feel is a result of the combination of the pistol-type grip, thumbhole stock, and relatively short barrel of 24.5 inches. It just holds and swings effortlessly, much like a bullpup – except that it’s not one.

The power plant is a 232 bar (3,365 psi) air reservoir under the barrel that ends a good seven and a half inches back from the muzzle, which is probably another reason for the handling qualities. On the end of the air tank is a manometer with a visible green zone that covers 1,000 to 3,365 psi in case you lose count of your shots.

The Urban 22 is a bolt-action design with a ten-shot rotary pellet magazine that slides into place on the left side of the receiver. There are no tricks to loading the mag – just drop in a pellet and rotate against spring pressure to the next hole. There are visual indicators that show how many remaining shots you have. It’s simple, and through plenty of shooting with a half-dozen types of pellets, it’s been utterly reliable.

The Urban 22 PCP doesn’t come with a scope but does have a machined-in rail on top of the receiver, so airgun-compatible rings are all you need to mount your scope of choice.

The Gamo Urban 22 PCP uses a probe filling system. It’s simple to use, but I’m not crazy about the probe method. Maybe I’m insecure, but I prefer the positive locking of a Foster quick-disconnect system. You know when it’s attached right and it stays in place even if things move around while you’re getting a free Planet Fitness demo when using a hand pump.

Anyway, the probe attaches to your air source – in our testing, a 4,500 psi hand pump supplied by Gamo. The probe has two O-rings that you need to keep lubed up with Molycote grease provided with the rifle. That greased-up fitting tends to attract dust and dirt, so you might want to slip a baggie over it between uses. According to the instructions, you insert the probe until it bottoms out. I didn’t have much luck with this approach using a hand pump. I figure a tank or compressor would be much less sensitive to the exact position of the probe due to the velocity of air flow – I imagine things would “seal up” more easily. I had to position the probe a bit short of completely seated but once I did that everything worked fine.

I started accuracy testing with a full tank – 3,365 psi according to the onboard gauge. After 27 shots (OK, I took a couple of extra from my five-shot group process) the pressure read 2,000 psi on the button. That’s still in the dead center of the green zone on the indicator. I kept going to see how many shots I would get with pressure remaining in the green zone. The first 35 shots left the muzzle at full power or close to it. The last shots, for a total of 40, started to taper off noticeably. So you might plan on about 35 shots per charge. If you want to keep counting simple, then top off the air supply every three magazines, and you’ll be good to go.

Still being in a counting mood, I decided to count how many manual pumps would take the Urban 22 PCP from the bottom of the green zone (1,000 psi) back to fully charged (about 3,365 psi). If you think in bar units of pressure, that equates to 232 maximum for this rifle.

The first 50 pumps with the Gamo hand pump took me from 1,000 psi to 2,000 psi. Another 40 pumps got me to the maximum fill pressure of 3,365 psi. So 90 pumps will get you from virtual dead empty to maximum pressure. In normal use, I would have topped it off after 30 shots so assume you’ll need to generate somewhere in the neighborhood of 75 pumps give or take to get your 30 shots. If you’re not into PumpFit workout programs, you can certainly fill the Urban with a tank or compressor.

The Gamo specifications say that the Urban will crank out 900 feet per second when using Gamo PBA Platinum pellets. I didn’t have any of those specific pellets on hand, so I checked velocity with a few different .22 caliber pellets ranging in weight from 13.73 gains up to 21.14 grains using a Shooting Chrony Beta Master Chronograph.

The PBA Platinum pellet weighs just 9.7 grains, so considering that the Sig Match Pb 13.73 grain pellet reached 847 feet per second, I suspect the PBA’s would have easily met or exceeded 900.

For a quick check on accuracy, I set up an indoor, 10-yard range, mainly because the weather was lousy on shooting day. Hey, that’s one of the benefits of airgunning, right? I fired five-shot groups and measured center to center.

Consider me impressed. For a $299.99 PCP rifle, I think that’s a bargain for the performance you get. While the Urban clearly liked some pellets better than others, as any gun will do, I didn’t have much trouble finding multiple options that created single, ragged holes on target.

I really like this little rifle. I’ll be buying it.