You are here: Home / Airguns / Getting Started in PCP – The Umarex Gauntlet Entry-Level PCP Airgun 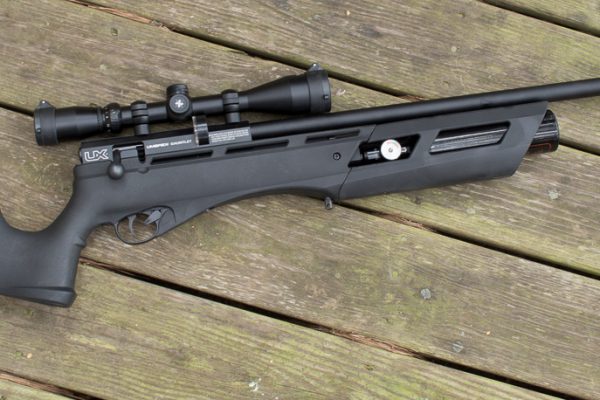 It’s looking like 2018 is shaping up to be the year of the entry-level PCP airgun. If you’re new to airgunning, PCP (pre-charged pneumatic) guns are those that carry a supply of highly-compressed air ready to go. No cocking or pumping required, at least until your tank runs out.

Why now for PCP?

First, the guns themselves are coming down in price. Way down. Several rifles are on the market this year in the sub $300 range. We’re even seeing regulated models at those price points – a feature that was only available at much higher price points not long ago. If you don’t know what “regulated” means, hold that thought, we’ll come back to it.

Second, the power sources to drive these air-hungry beasts are becoming more affordable by the month. Sure, you’ve been able to get a hand pump in the $100 to $200 range, plus or minus a Jackson. Hand-powered is just fine if you’re shooting smaller calibers like .177 and .22 because the number of shots per workout ratio is still pretty good. When you get into big thumper calibers like .357, .45, and even .50, the insatiable thirst for lots and lots of high-pressure air makes for a lot of work. Who needs a Planet Fitness membership anyway?

That’s where the new compressors come to save the day. Companies are finding new ways to bring the cost of compressors well below the $1,000 range. For example, AirForce has introduced the E-Pump Compressor which will hit the market at about $850. The folks over at Crosman recently announced the Benjamin Traveler. That one carries an MSRP of just $549.99. We’re talking about stand-alone compressors here, not boosters. We’re also talking portability. Both of these offerings can run on household AC or car / ATV 12-volt systems so you can use them just about anywhere.

For those who are pondering adding PCP to their airgunning, we decided to look at the new Umarex Gauntlet. Available for $299.99, it breaks the $300 barrier by a full penny, and you know what they say about “pennies saved.” At that price point, the Umarex Gauntlet definitely qualifies as an entry-level PCP airgun.

Available in both .177 and .22 calibers, the primary features between the two models are the same, except, of course, velocity and the caliber-specific magazines. With this product, Umarex threw down the proverbial glove by making available features typically only present in high-dollar offerings.

The big feature is regulation. Not the legal kind but rather air pressure regulation. By controlling air going into the chamber from the tank, the regulated Gauntlet maintains the same pressure for every shot as long as the tank has adequate air remaining. Without a regulator feature, pressure changes as the air volume in the reservoir tank declines, so velocity may vary as you shoot through a tank of air.

You can easily monitor reservoir status with the onboard pressure gauge which has a green zone that shows tank pressure between 1,100 and 3,000 pounds per square inch. With the .177 rifle, like the one we tested, you’ll get about 70 shots per “green zone” all with the same velocity of 1,000 fps give or take depending on pellet weight. The .22 caliber Gauntlet will launch about 60 shots in the 900 fps range per tank fill.

That tank is a 13 cubic-inch removable model that reins in 3,000 pounds per square inch of air pressure. A simple tool allows you to swap tanks in the field so you can carry a spare or two if you like. That’s a lot easier than lugging around a hand pump.

Fill it By Hand

Since we’re talking about getting into PCP, I decided to do everything by hand the old-school way. Umarex makes their own sturdy hand pump, so I elected to use that one. While it looks like a pump for your beach cruiser, it’s not. Built to crank out 3,000 psi pressure (that’s 200 bar) it has a Foster quick disconnect attachment that fits the one on the Gauntlet’s tank. If you want to use the pump with other non-Foster connections, no worries. The hand pump Foster attachment is threaded on. This pump retails for $169.19.

When my Gauntlet entry-level PCP airgun arrived, it was more or less dead empty, at least according to my quick look at the gauge. It took me about 100 hand pump cycles to get the gauge to the beginning of the green zone. While I might have lost count because I was watching reruns of Lifestyles of the Rich and Famous, I think it took about 150 more to top the tank off at 3,000 psi. Using some heavy math skills, that means that about 150 pumps will get you a 70-shot shooting session. You’ll want to take your time pumping because heat can build up if you go too fast. While that won’t cause the sun to plummet into your backyard range, you’ll end up with less pressure in the tank as the air cools.

The Gauntlet is magazine fed with a 10-shot rotary model that snaps with authority into the receiver from the right side. A viewing window lets you see the number of remaining shots. Read the instructions before trying to load it or else you’ll probably do it wrong. It’s a clever design that winds up an internal spring for subsequent pellet advancement, but it’s a bit tricky until you understand how it works. Umarex also includes a single shot tray. I tried it, but quickly figured out I had a lot more fun using the magazine. Can you say “volume of fire?”

The rifle is designed for a scope but doesn’t include one. Hey, what do you want for less than $300? There are no iron sights, but you won’t want them anyway. With its consistent velocity, the Gauntlet is one accurate rifle, and a decent optic will let you take full advantage of that precision. Before you rush out and buy scope rings, be aware that the rail on the receiver is the 11mm Dovetail size popular on many airguns.

While we’re talking about optics, there’s another feature that will provide more flexibility in your choice of optic. The stock comb is height-adjustable with a large dial inset into the buttstock. A simple twist raises or lowers the comb so you can instantly configure the rifle to your dimensions and the height of your rings and optic for a perfect and consistent cheek weld.

Just in case it’s not obvious, the Gauntlet is a bolt gun with a short throw that locks in both the open and closed positions if you like. It takes some pressure on the backstroke to cock the rifle, but it’s nothing you can’t manage while keeping the rifle to shoulder and on target.

The trigger on this rifle broke at 2 1/2 pounds of pressure, but that’s adjustable. You’ll have to remove not only the magazine but the air tank. After doing so, you’ll be able to adjust the pull weight up or down and the amount of over-travel and sear engagement. The process is well documented in the owner’s manual so read that carefully before starting. A little adjustment goes a long way.

The Gauntlet’s barrel is fully shrouded. The outer barrel sleeve unscrews by hand to reveal the much thinner rifled barrel underneath. When you remove the shroud, you’ll see muzzle-brake-like gas ports just behind the muzzle that redirect air into the large space between the barrel and the shroud. It not only makes the rifle look like serious business, but the shroud also does an admirable job of reducing noise. While airgun savvy neighbors might know what you’re doing in your backyard, you won’t be causing much of a disturbance, and you don’t need any hearing protection.

I shot a variety of .177 pellets through my chronograph to check the velocity. Here’s what I measured as averages for a string of each ammo type.

Those figures equate to energy levels between 12 and 16 foot-pounds.

As for accuracy, I shot the same pellets at targets 25-yards down range, measuring the diameter of five-shot groups. My range day was windy. Really windy. With a gusting10+ mph diagonal breeze I figure the light .177s blew around a little and groups showed that, with many having three close shots and a couple of apparent flyers. With that said, here’s what I measured.

So, what’s the bottom line? For somewhere around $450 depending on how aggressively you shop, you can get a PCP rifle AND an air source to power it. Keep in mind that the pump works with most any 3,000 psi or less PCP airgun, so you can spread that cost over multiple rifles and pistols. As you get more serious and budget allows, you can always add tanks or compressors down the road. If you’re thinking about jumping into pre-charged pneumatic shooting with an entry-level PCP airgun, check out the Gauntlet.