You are here: Home / Competition / Gary Anderson A Semi-Finalist For Induction To Olympic Hall 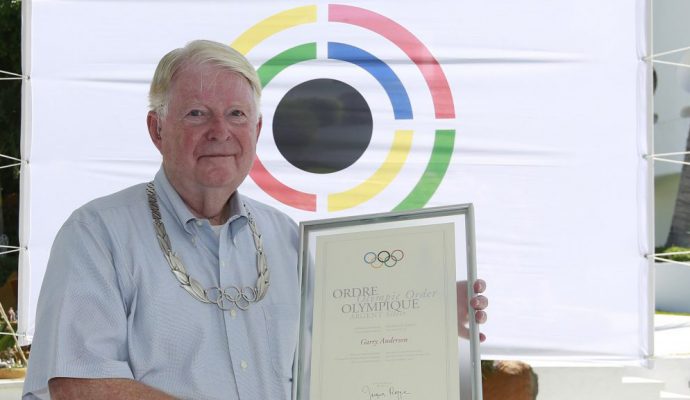 CAMP PERRY, OHIO – Gary Anderson, Director of Civilian Marksmanship-Emeritus, who has been a household name at the Civilian Marksmanship Program, and in much of the U.S. precision rifle shooting community since the 1950s, has been named one of 15 finalists for induction into the U.S. Olympic & Paralympic Hall of Fame Class of 2019.

You May Vote More Than Once!

Anderson, 79, served as the Director of the Civilian Marksmanship Program (CMP) from 1999-2009. In addition to promoting firearms safety training and rifle practice for all shooters, his primary focus at CMP has been to develop and sustain successful youth marksmanship programs at both regional and national levels.

Anderson, in addition to earning Olympic gold medals in the Tokyo and Mexico City Games in rifle shooting, and countless marksmanship awards around the world and across the U.S., is known for his unrelenting desire to promote the benefits and instruct the safety of the shooting sports.

From a very young age, hunting and shooting fascinated him. He grew up on a farm in rural Axtell, Nebraska. Without benefit of a coach or proper equipment (including ammunition), Anderson taught himself how to shoot by dry-firing his rifle for hours at a time. Dreams of becoming an Olympic gold medalist in rifle marksmanship led him to the US Army. In 1959, after convincing skeptical US Army coaches that his implausibly high shooting scores were accurate, he was assigned to the elite U.S. Army Marksmanship Unit at Fort Benning, Georgia.

His first international competition was the Pan American Games in 1959 — only two years later, in 1961, he would win his first national championship. At the 1962 World Shooting Championships in Cairo, Egypt, he stunned the shooting world, then completely dominated by Russian shooters, by winning four individual titles and setting three new world records. At the 1964 Olympics in Tokyo, Japan, he confirmed his performance in Cairo was not a fluke, setting a new world record and winning the 300-meter free-rifle gold medal. At the 1966 World Shooting Championships in Wiesbaden, Germany, he won three additional world titles. Anderson continued to demonstrate his dedication to shooting by besting his own world record and winning a second gold medal in the 300-meter free-rifle event at the 1968 Olympics in Mexico City.

Following retirement from active competition, he continued to devote his time and energy to shooting sports by coaching young shooters, teaching shooting clinics, speaking at numerous shooting sports functions, and authoring hundreds of magazine articles and three books about shooting. Even during his “retirement” from shooting competition, Anderson competed in the NRA National Highpower Championships at Camp Perry Ohio, winning the President’s National Trophy in 1973, 1975 and 1976.

On December 31, 2009, he announced his retirement from the DCM position, but is continuing his association with the CMP in a part-time consulting capacity where he works on several projects that include training curriculum development, master instructor training, rulebook editing and technical writing.

Anderson is a graduate of Hastings College in Nebraska, and the San Francisco Theological Seminary in California. A former Nebraska state senator, he worked at the NRA where he served as Executive Director of General Operations, where he was responsible for the development of safety, training and competition programs.

Among hundreds of other honors, Anderson was awarded the National Board for the Promotion of Rifle Practice (NBPRP) Distinguished International Shooting Badge (Serial number 1) in April 1963 by President John F. Kennedy.

As a member of the NBPRP board, he was one of the first to advocate and pioneer a shift in priorities to youth and junior shooting. As a result of this shift, Anderson became the founding and administrative director of the U. S. Shooting Team Foundation and, in 1993, he moved to Atlanta to become the Shooting Competitions Manager for the 1996 Olympic Games.

In 1996, Anderson accepted a position with Fulton County Georgia, to manage the Wolf Creek Shooting Venue, a facility destined to become a premier national and international center for the shooting sports.

Anderson’s influence on shooting sports extends well beyond the United States. He has traveled extensively throughout his career in shooting, serving as a genuine ambassador for shooting sports, attending 11 Summer Olympic Games, three as a competitor and eight as technical delegate or a jury member. He was the first American elected to the position of Vice President of the International Shooting Union. In 2018, he stepped down as a Vice President of the International Shooting Sports Federation after 40 years of service in the world governing body of Olympic shooting. He is also the recipient of one of only five prestigious honorary memberships to the historic and renowned shooting club, Hauptschutzengesellschaft, in Munich, Germany.