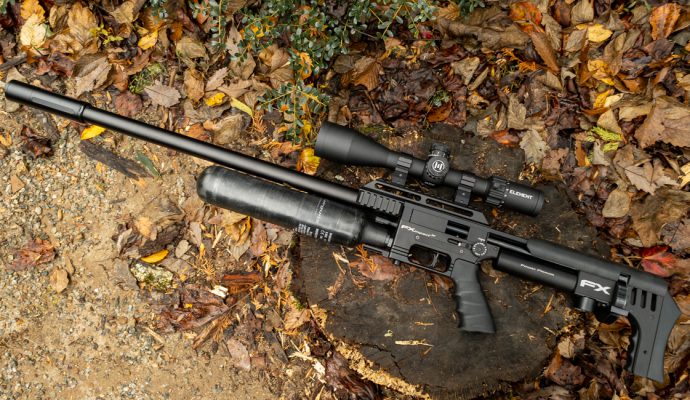 I’ve been checking out a new convertible.

No, not a Koenigsegg Agera, as sweet as that might be. This one is equally cool, however, and also made in Sweden. It’s the FX Impact Mk II Air Rifle. The “convertible” description applies to a slew of features that let you tweak, modify, and otherwise make your own this particular rifle. The sample rifle shown here is a new for 2020 .35 caliber, but that can be temporary if you like. That’s because the barrel is easily swappable for a quick caliber change. By removing a locking screw near the breech, you can remove the existing barrel and replace it with one of a different caliber. Do note that you also need to swap out the pellet probe, but that’s also a straightforward operation.

But that’s not all. The barrel is housed in the Interchangeable Barrel Liner System, so within your caliber of choice, you can also swap out liners to tweak performance with a bore using a different twist rate. It’s a neat way to customize your rifle for precisely the application and ammo you want.

The rest of the rifle is elegantly engineered, as you might expect from FX. The 580cc carbon fiber air cylinder (for the .35 cal) rides forward of the receiver. You fill it with a Foster connection so there’s no messing around with probe seals. That 250 bar (3,600 psi) tank will give you about 40 shots of .35 caliber joy give or take, depending on your specific power settings. We’ll cover that in a minute. There is a manometer right near the Foster port so you can keep track of your fill level.

The rotary magazine is fantastic. It’s easy to load and not at all finicky like too many air rifle mags. Rotate a locking lever, remove the clear plastic cover, wind the inner pellet wheel and drop in 18 pellets of your choice. I should note that smaller caliver versions of this rifle hold more. For example, the .22 and .25 models pack 28 pellets per mag. The magazine locks into place just forward of the adjustable buttstock and… it just works. I had no trouble with reliable feeding throughout my testing, and if I must confess, playing.

The side bolt is slick like fine Smör Swedish butter. Operating it with a finger or two is effortless. The safety lever is located just above the trigger guard on the right side just below the side bolt. It was also positive and easy to operate with my trigger finger. I’m right-handed, by the way, so the control placement worked easily for me.

The trigger is also adjustable. You can adjust the height of the trigger face itself to fit perfectly to your hand. Using two different screws in the trigger guard area, you can also set the travel distance for the take-up stage of the two-stage trigger system. The second screw allows you to adjust the pull weight of the break itself. The trigger will spoil you rotten. I’m not quoting the weight here because you can make it whatever you like.

The shrouded barrel is threaded and this .35 caliber Impact Mk II came with a screw-on moderator / suppressor.

The Impact Mk II is all about adjustability. Caliber is the obvious “big adjustment” you can make in this rifle. Less obvious are the multiple features designed to give you absolute control over power.

Behind the trigger, under the receiver, you’ll find a regulator screw heading up into the action. A quick turn (start with quarter-turn increments) counterclockwise will increase the pressure of the regulator. The same in the opposite direction decreases regulator pressure, although you have to dry fire shots between each adjustment until you reach the lower desired pressure. There is a separate manometer to help you achieve the regulator pressure you want. Just go slow and monitor your progress. If you’re seeking a specific velocity, be sure to fire several test shots after each adjustment, so everything is settled. While you’re adjusting regulator pressure, you can also tweak the hammer spring pressure with a receiver screw on the left side.

You also have two shot power adjustment features. On the front of the receiver is an adjustment knob. Clockwise rotation will reduce power while counter-clockwise rotation increases shot power. Last but not least, you see a wheel on the left side of the receiver designed to offer predictable and repeatable power settings should you want to customize the Impact Mk II to specific pellet types, ranges, or ambient conditions. MIN and MAX settings are opposite each other on the wheel and in between, you’ll see the numbers one through five on the face on one side and letters A through E on the other. This “dual” setting approach is there because there are minor power variations on either side of the wheel. So, to be clear, the “1” and “E” settings will be similar, but not identical on the lower end while “5” and “A” will be similar, but not identical, on the higher end of the power scale.

To test out the Impact Mk II, I used FX .35 caliber 81-grain pellets. At the MIN power setting on the wheel (I left the front power knob in the middle position) I measured velocity 10 feet from the muzzle at 666 feet per second. When I moved to the “1” setting, velocity increased to an average of 704 fps.  Power level “3” brought me to 779 fps and MAX took us to 877 feet per second. So, in ballpark figures, using the power wheel adjustment only, we had just over a 200-fps range of velocity. With more time I’d have like to nail down the differences on the letter side of the wheel and see what impact the front power knob and regulator adjustment had on these figures.

For accuracy, I set up targets at 50 yards. Wind conditions on my shooting day were challenging, with gusts coming across at about 45 degrees in the 12-mph range. At power level “1” I measured a five-shot group of 1.53 inches. At level “4” 1.04 inches, and at MAX power, 1.38 inches. I wouldn’t draw any conclusions about mechanical accuracy at those different power levels given the windy conditions. Without a doubt, groups would have come out even smaller on a calmer day. If I had the opportunity, I’d love to burn through a couple of tins of pellets while experimenting with different power levels and regulator pressures to dial in maximum accuracy.

I did notice elevation point of impact differences at 50 yards with the different power levels. Assuming a zero for MAX power, level “4” shot groups about one inch low while level “1” groups landed about two inches below the MAX power point of impact. This is nothing unusual. With the ability to customize power level, and resulting velocity, that’s exactly what you would expect.

This is a beautiful and efficient rifle. The attention to detail of pretty much everything is evident. The nifty part is its surprising efficiency. For a “bigger bore” you’re still getting a heck of a shot count considering the diameter of its projectiles.