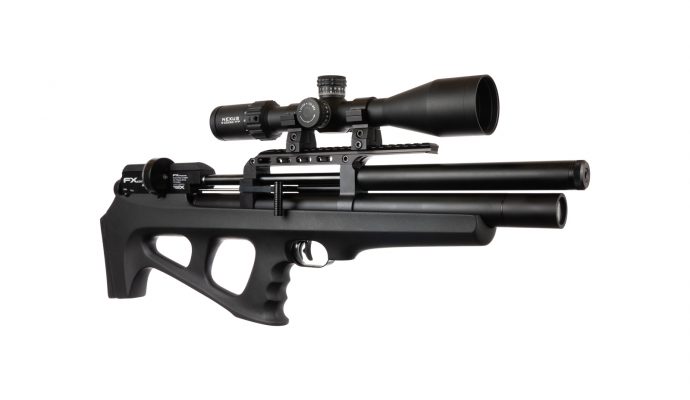 The FX Wildcat is part of airgun royalty and considered the perfect bullpup; a rifle that was compact before compact became a buzzword in airguns. A perfectly balanced and ergonomically designed bullpup that defined the generation of bullpups that have followed in the footsteps of the original Wildcat. Now – with massive upgrades to better suit the modern airgunner, we are proud to introduce the FX Wildcat MKIII.

The improvements start inside the Wildcat’s main block. Using cutting edge engineering, FX has really pushed the boundaries of what can be accomplished with modern precision CNC machines. FX Airguns increased the plenum size and air flow of the Wildcat while also increasing the valving. The result of these changes to the airgun block give more flexibility, power and efficiency needed for shooters wanting greater versatility as well as the ability to projectiles other than pellets.

Power adjustments to the Wildcat MKIII are built around the new Rear Power Adjuster. This power adjuster is a breakthrough as it allows for both micro and macro power adjustments to the hammer spring. The rear power adjuster has 7 presets for the hammer, but the actual hammer tension can be adjusted more fully higher or lower using an Allen wrench through a hole found in the 8th position of the adjuster. This allows the Wildcat hammer to be fully adjusted in harmony with the externally adjustable AMP regulator. The Wildcat MKIII is a fully adjustable rifle that also now allows the ability to swap calibers and barrels quickly and easily much like the other modern FX rifles.

The Wildcat MKIII has also upgraded its magazine to allow the use of larger capacity magazines. The Wildcat now uses the standard Side-Shot magazine (as used on the FX Crown and FX Dreamline) to more than double its shot count over the MKII magazine.

Lastly, all Wildcat MKIIIs, will ship with the new FX Superior STX barrel liner. This barrel liner is a great leap forward in the Smooth Twist X barrel technology because it allows for a higher precision for both pellets and hybrid slugs.

For FX dealers found within the USA, the Wildcat MKIII will have as standard an upgraded picatinny scope rail (available in other regions as an upgrade option over the standard dovetail rail).